Just as Australia’s immigration minister Peter Dutton was despatched to Europe to ask humanitarian agencies how Australia might strengthen its response to the Syria crisis, UK Chancellor George Osborne said this :

This is no new thought. However, Osborne has been interpreted as signalling a substantial departure from business as usual because, in making the above statement, he also flagged a ‘fundamental rethink’ of the UK aid budget with a view to increasing its ‘flexibility’. (UK development minister Justine Greening has said merely that any additional costs would be absorbed by growth in the aid budget, and not come at a cost to existing programs.)

As the Australian government weights its options, beyond merely altering the distribution of source countries within its existing and rather modest humanitarian intake [see 9 September update at end], Osborne’s announcement must surely have rekindled interest within some sections of the government in the idea of using the Australian aid budget to offset at least some of the costs associated with resettling refugees. An extreme form of that idea has already seized one crossbencher, Senator Leyonhjelm.

Under OECD Development Assistance Committee (DAC) rules on what counts as Official Development Assistance (ODA), costs associated with the sustenance of refugees in donor countries can be reported as ODA for up to a year after the arrival of those who incur them (see here [pdf], para 74). The UK, like many other donors, already reports some such costs. It has not until now been a major user of this reporting category—far from it (chart below). Neither, for most of the past decade, had Australia been until the former Labor government announced the reallocation of up to A$750 million over two years within the aid budget to offset onshore asylum seeker costs. This reallocation was at the time strongly criticized by the now foreign minister, Julie Bishop, but her views might well have changed with the times. 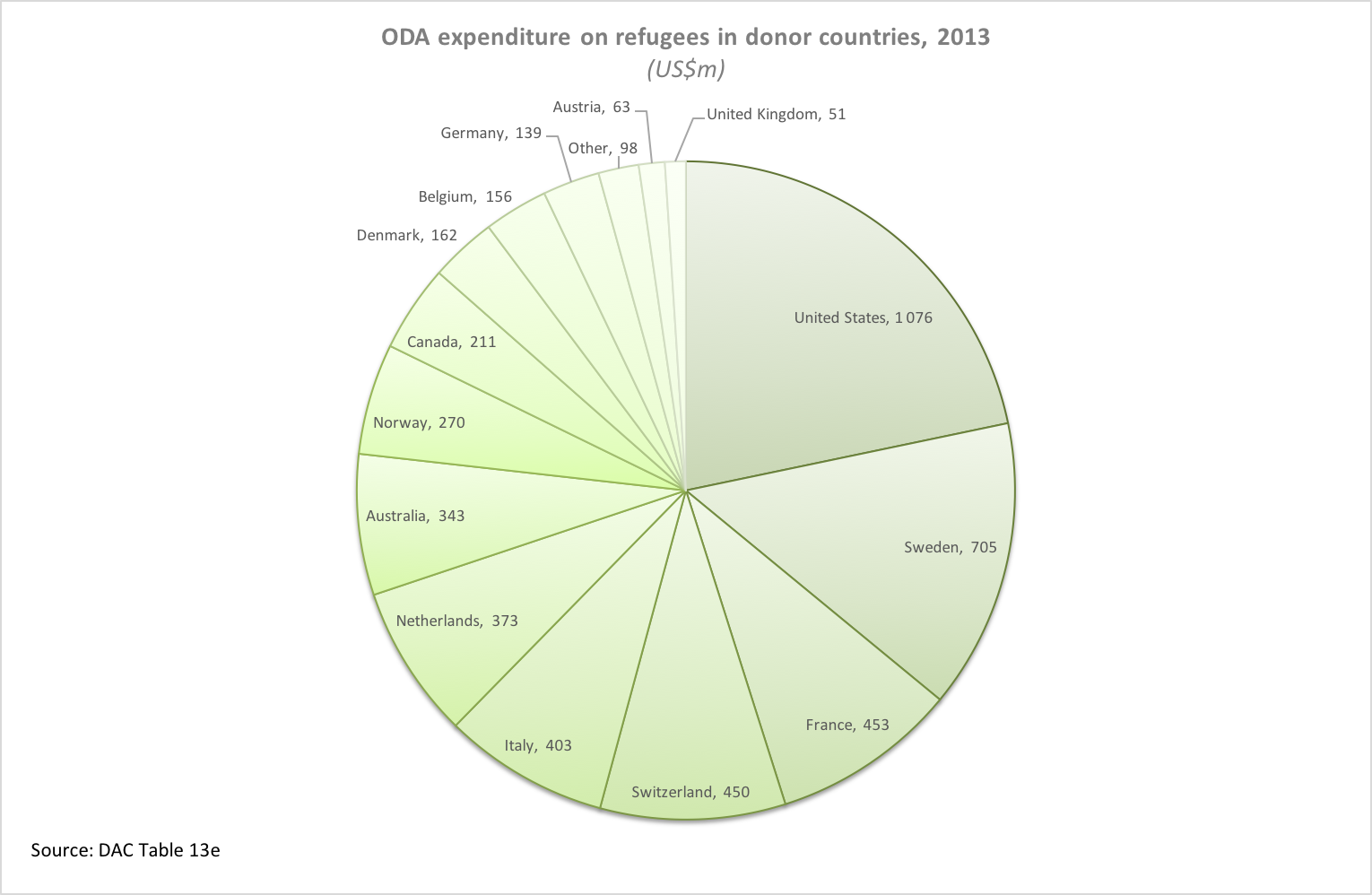 DAC donors in total spent about US$5 billion on refugee costs in donor countries in 2013, the most recent year for which disaggregated data are available. The UK was the smallest spender among the top 14; Australia was ranked seventh. Total expenditure in this category has increased over fivefold in real terms since 2002, thanks to increases from existing spenders and the entrance of some new ones after changes in their own ODA reporting policies, particularly Australia in 2012 (Australia had reported some costs in the early 2000s but at fairly low levels) and Italy in 2011. The pattern of spending since 2002 is shown in the chart below. 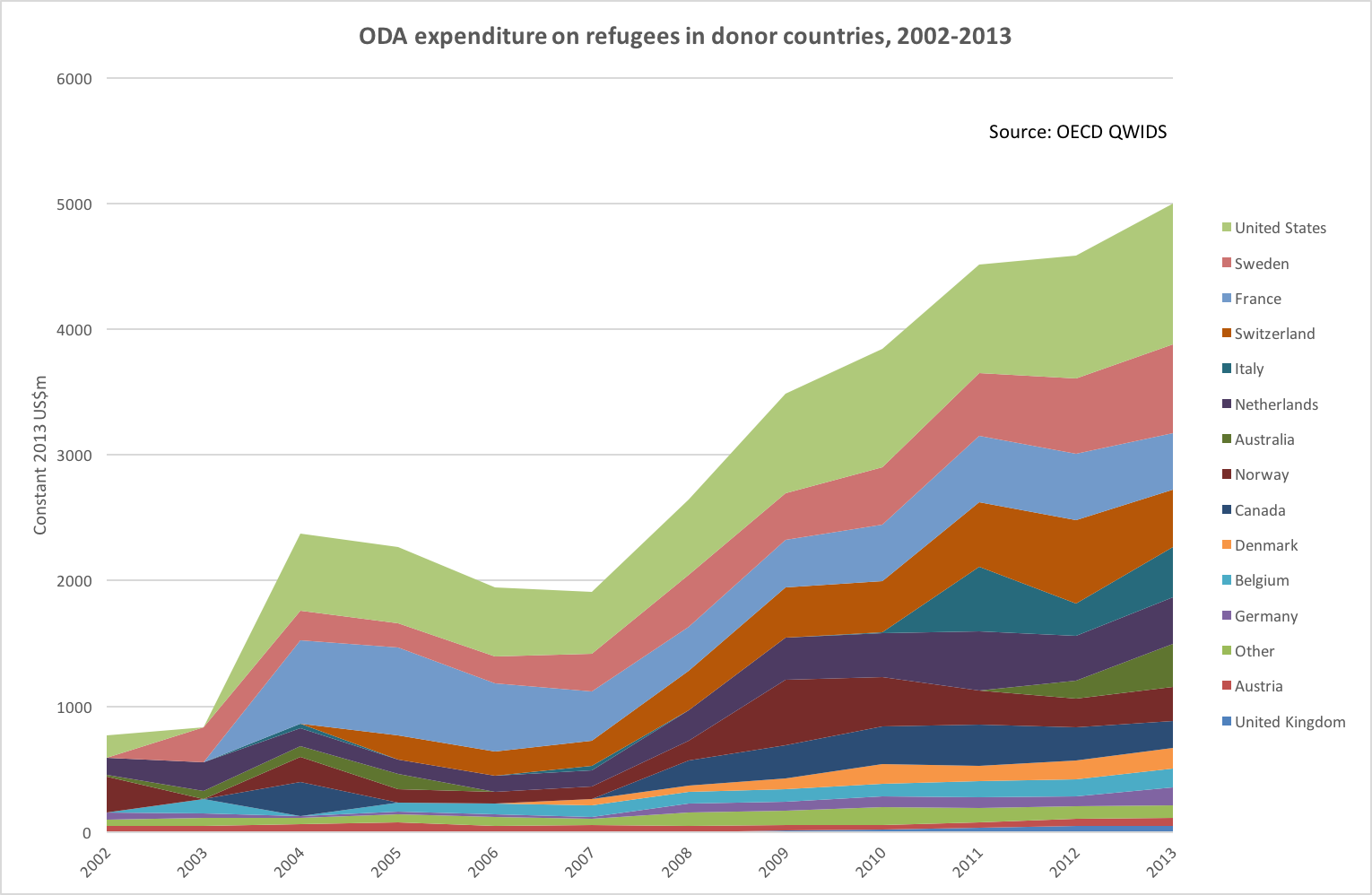 One can debate the merits of allowing onshore refugee costs to be counted as ODA at all, and many people take the view that expenditure in this category is not ‘real aid’. While I don’t share that view, there is no question that ambiguities and loopholes in the DAC rules need to be cleaned up, and there is now much greater urgency than there has been for some time about dealing with this problem. If present reporting practices continue, we can expect to see a further and very substantial acceleration in the proportion of ODA allocated to onshore refugee costs. Donors currently interpret the rules in extremely various ways, as detailed in this earlier post on the subject. To cut a long story short, the rules at present are exploited by a number of donors to reduce their asylum seeker bills and do not specifically reflect those donors’ performance as accepters of refugees.

If the DAC were finally to get around to reviewing its reporting directives on this point—something that many of its members have long been loathe to do—a good review outcome would see new rules framed so as to create incentives for countries to accept an appropriate share of the global refugee burden, whether through resettlement programs (of the kind that Australia operates) or through recognition of the claims of a proportion of the asylum seekers within their borders, which is the much more usual route to achieving refugee status. Costs would only count as ODA, for up to one year as at present, if incurred by recognized refugees rather than unprocessed asylum seekers, and only after the point of determination of refugee status.

In addition, rather than requiring bean-counting and encouraging gaming, a fixed per capita ‘price’ could be agreed on the basis of experience to date. From the information contained in this now admittedly dated DAC document, a reasonable guess would be that the median annual cost per refugee is now around US$15,000. If this is vaguely right then, per thousand refugees, the charge to a donor country’s aid budget would be US$15 million. The total number of refugees whose costs could have been reported in 2013 on this basis, and at this price, was a little over 330,000—that is, US$5 billion divided by US$15,000. As it happens, UNHCR statistics [pdf] show that the total number of refugees resettled or recognized in DAC donor countries last year was actually close to this at just under 320,000. By adopting the approach here suggested, costs would be unlikely to blow out from their present level and would grow or vary with the number of refugees resettled or recognized in donor countries, rather than with the much larger and more volatile number of asylum seekers crossing their borders.

Australia, oddly, has in the recent past charged asylum seeker costs to its aid program but seemingly not refugee costs. If the government feels tempted to have the aid program foot the bill for any special intakes of Syrian or other refugees, perhaps it might consider working with the UK government to bring about a long overdue revision of DAC rules in this area—with a view to avoiding undue costs to aid budgets and creating incentives for governments to share the global refugee load.

Update: On 9 September, the Australian government announced that Australia will offer, over an unspecified period of time, 12,000 permanent resettlement places to refugees from Syria and Iraq. These will be additional to the 13,750 places currently available annually under Australia’s refugee resettlement program. Priority will be accorded to ‘women, children and families from persecuted minorities who have sought refuge in Jordan, Lebanon and Turkey’. One report, citing ‘senior government officials’, indicates that the cost of filling these places over the forward estimates period, i.e. four years, has been estimated at $700 million, excluding processing costs. Note that costs eligible to be reported as ODA are ‘payments for refugees’ transport to the host country and temporary sustenance (food, shelter and training)’ but not ‘amounts spent to promote the integration of refugees into the economy of the donor country’.