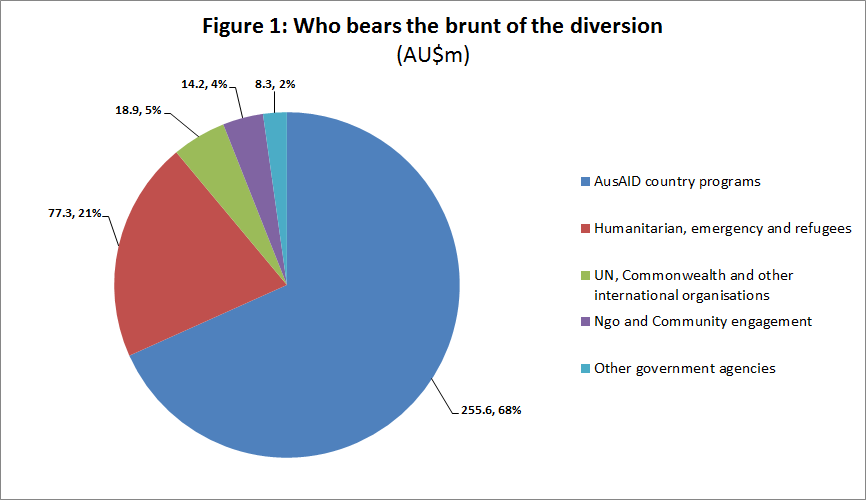 Six weeks after Foreign Minister Bob Carr announced that $375 million would be reallocated within the Australian aid program to finance asylum-seeker costs, AusAID has released (pdf, p. 102 onward) its updated 2012-13 budget estimates. The reallocation represents an effective cut of 7.3 per cent to other elements of the aid budget. Savings had to be harvested from all global, regional and country programs. Below is our preliminary analysis, looking at the cuts in terms of both what was originally promised for 2012-13, and also in some cases making a comparison with the 2011-12 budget outcome estimates. (Excel worksheet available here.) 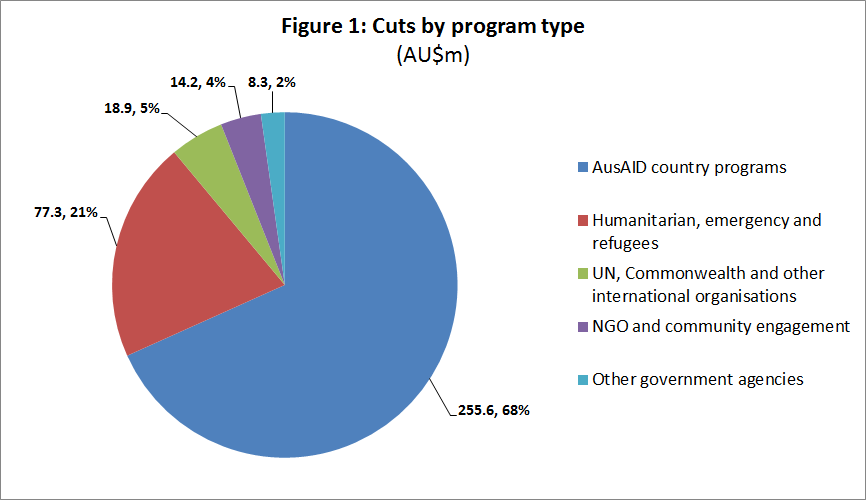 Figure 1 shows that AusAID’s country and regional programs bore the brunt of the cuts (of which more below), with the humanitarian and emergency response program also contributing generously, indeed disproportionately. Cuts to global and other programs, many of which offer only limited flexibility to reduce costs, were more selective, and several are worth noting: 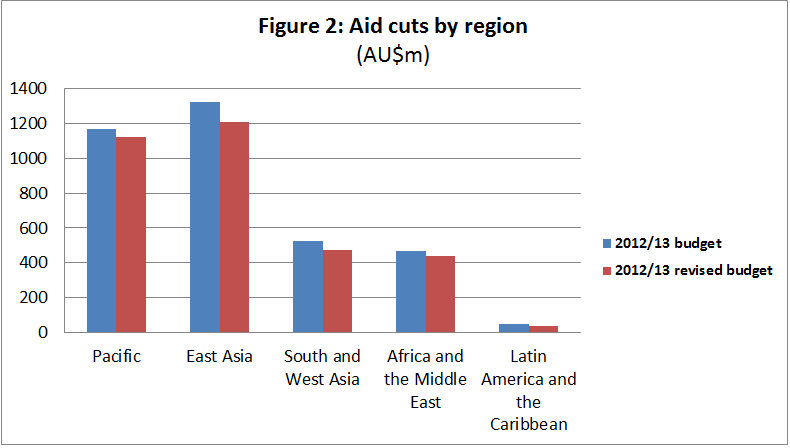 As Figure 2 shows, no region was spared cuts. However, the cuts were applied quite evenly to country programs, at least considered at the level of regional aggregates (things get a bit choppier when you look at individual country allocations). As far as country programs are concerned, the overall shape of the program has not changed: all regions except one account for roughly the same share of total aid before and after the cuts are applied. The exception, reasonably enough, is Latin America and the Caribbean, which went from 1.1 per cent of the aid program to 0.8 per cent.

However, even doesn’t mean easy. Many significant bilateral partners have witnessed very substantial cuts to the budgets they were allocated back in May 2012. That includes Solomon Islands (11 per cent cut from 2011-12), Vanuatu (13 per cent), the Philippines (11 per cent), and Cambodia (17 per cent). In other cases the percentage cuts were smaller but the absolute numbers quite large—for example, a cut of $33.5 million to the Indonesia country program (close to $40 million in terms of total ODA). Presumably by December 2012 these countries, and AusAID, were quite advanced in the processes required to ensure effective spending of their budget allocations by the end of June 2013. Such late and large cuts will have thrown many spanners in the works, and necessitated some painful backpedalling.

Finally, as is plain from Figure 1, the lion’s share of savings in AusAID’s global programs came from the humanitarian and emergency response budget (over $70 million, and another $7 million in reduced funding for the UN’s Central Emergency Response Fund). That budget was slated to receive a 29 per cent increase, from $216.7 million in 2011‑12 to $278.5 million in 2012-13. Instead, it will be four per cent smaller than it was last year. This comes on top of a $35 million reduction in total non-emergency flows to Africa, which raises questions about Australia’s capacity to fund an appropriate response to ongoing humanitarian crises in sub-Saharan Africa, let alone deal with any major new crises there or elsewhere. In the event of the latter, we can be certain that there is no remaining flexibility elsewhere in the aid program.

While it is welcome that we now have updated budget figures, what remains entirely invisible is the impact of the aid cuts on individual programs, projects and organisations, both this year and into the future. For more information on this, we wait with bated breath.

Jonathan Pryke is a Researcher at the Development Policy Centre. Robin Davies is Associate Director of the Centre.