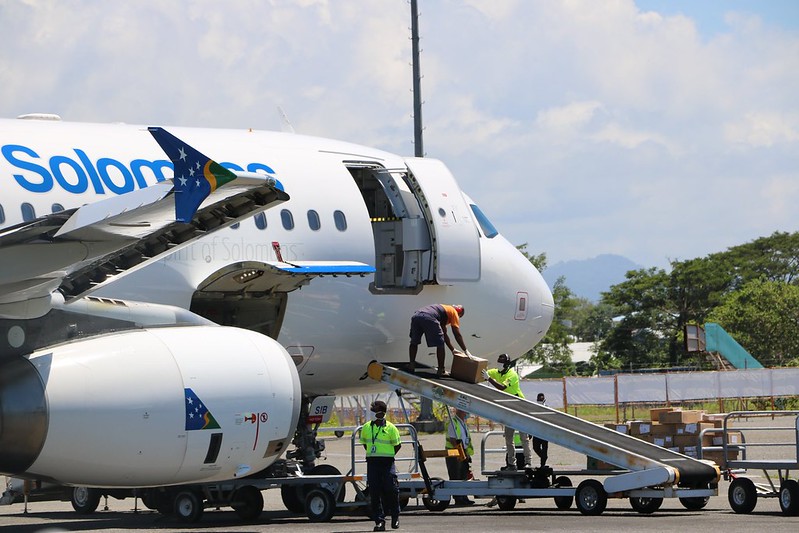 Faced with the prospect of another cut to aid while the COVID-19 pandemic continues – and in some ways intensifies in our region – the government has again reached for the “temporary and targeted” lever to avoid such an outcome.  Temporary measures were set to decline to $179 million in 2022-23, but were increased through the budget process to $460 million.

In addition, for the first time in a decade, the government will do what it promised to do in the 2013 election and index aid, though unfortunately the 2.5% increase applied to “base” aid, that is excluding the temporary measures, will not keep up with resurgent inflation. Together, however, these two measures – partial indexation and an increase in temporary aid – will result in a small nominal increase and a stabilisation of aid in real terms in 2022-23.

If the budget had followed the 2021-22 forward estimates, there would have been a total aid decline in real terms by 5.5% in 2022-23. Given this, a stabilisation in real terms, while modest, is a significant improvement. Revised estimates for the current year also show slightly higher than budgeted expenditure, with increases to meet urgent needs, such as aid to Ukraine. However, the longer-term projection of cuts to come is a feature of both the last and this budget. While the 2.5% increase in the base will remain a feature of aid budgets in the coming years, this is not enough to offset the (postponed) unwinding of the temporary COVID-19 measures. 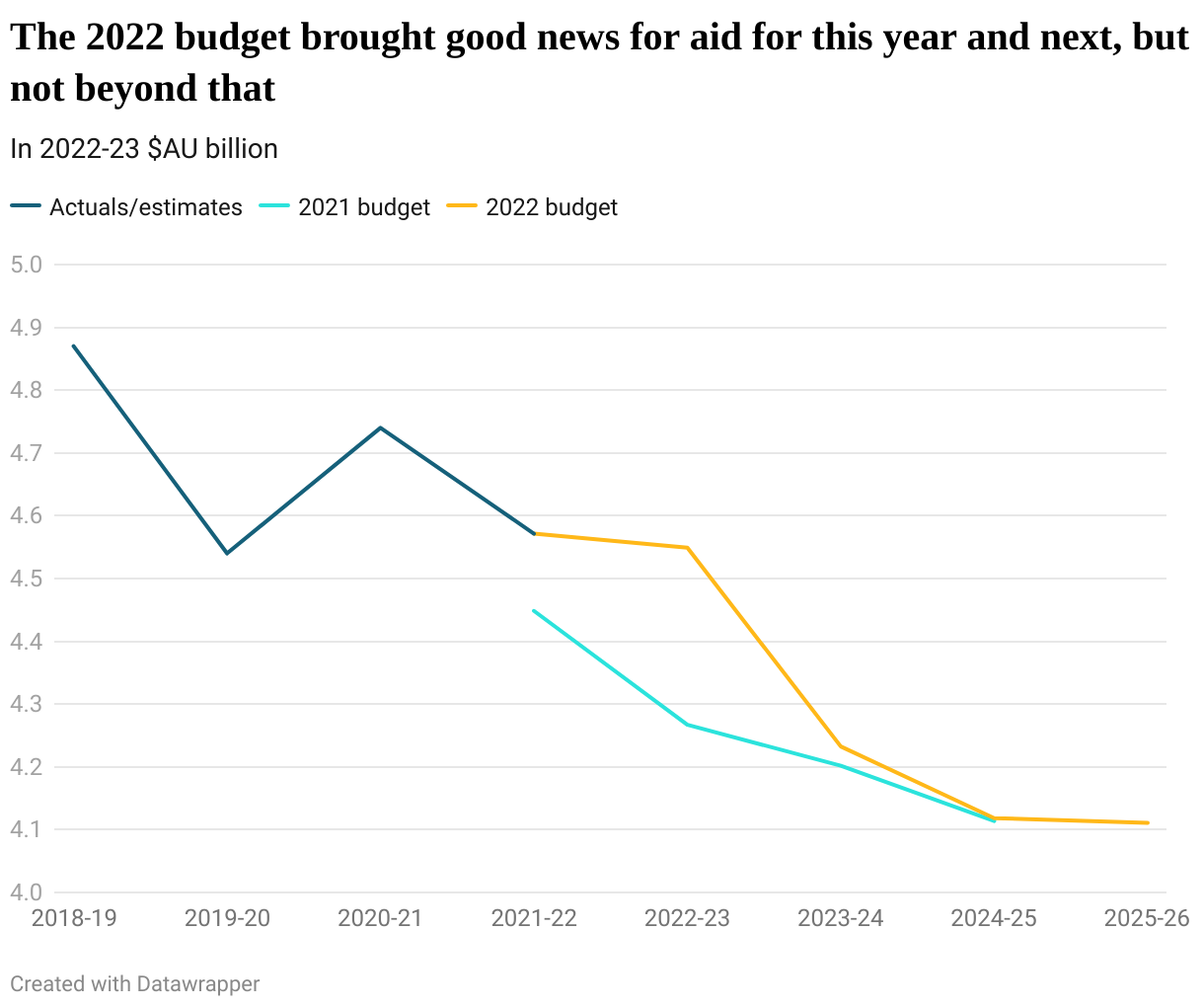 The budget introduces a new, two-year $318 million assistance package for the Pacific and Timor-Leste. This will replace the existing Pacific Response Package, announced in the 2021 Budget, which will expire in June 2022.  The bulk of this measure ($285 million) will be expended in 2022.

While the increases in regional poverty, inequality and instability resulting from COVID-19 will be both prolonged and widespread, the government’s response in both the Pacific and Southeast Asia remains “temporary and targeted”. This piecemeal approach seems counter-intuitive for a government that talks frequently about Australia’s need to shape  a more contested strategic environment over a time horizon that spans decades.

As Australia’s aid response to COVID-19 enters its third year, one of the most interesting features has been the increase in the share of aid, particularly Pacific aid, delivered as either direct or earmarked budget support. As recently as 2019, the share of Australian aid delivered through partner governments was in decline. However, given the need to provide practical and rapid support in the face of the COVID-19 shocks, the government has increased the share of total aid provided through partner governments to 9%. This is its highest level since the Coalition assumed government in 2013 and almost triple the share provided in 2018-19.

Whether this will become a more permanent feature of Australia’s Pacific aid remains to be seen. But, using the leverage that comes with China’s growing presence in the region, Pacific governments are likely to push for further increases in direct budget support from Australia.

Aside from the Pacific, the Government has also provided additional funding ($50 million in 2021-22) to support its $65 million commitment to the international humanitarian response in Ukraine and surrounding countries. Budget night has also confirmed an extra $77 million in additional ODA in 2021-22 to support a new Australian pledge of $85 million to the COVAX Advanced Market Commitment mechanism to address global vaccine access. There is also $100 million over five years (of which half qualifies as aid) for the Coalition for Epidemic Preparedness Innovations, a massive step-up of our previous commitment of only $12 million.

While there have been some modest increases in aid in this budget, the government has been more active on the loans front. The budget announced an increase in the cap of non-concessional finance provided through the Australia Infrastructure Financing Facility for the Pacific, from $1.5 billion to $3 billion.

Loan budget support also dwarves the grant budget support discussed above, with a total of $2.7 billion of cheap but non-concessional loans disbursed to the Indonesian and PNG governments since late 2019. No government has ever provided as much debt financing for our neighbours – and, with interest rates so low in Australia, this is a valuable contribution.

On the transparency front, it is positive that the Government is now providing estimates for total aid (“base” plus temporary and targeted measures). The absence of such basic information, missing for the last two years, led to all sorts of bizarre contortions and confusions. Good that the government is now talking about total aid again, and good that a cut was avoided at a time of global and regional crisis.

Those are low bars though. One notable, negative milestone the government hit this year was to preside over an aid budget of just 0.2% of gross national income, a new all-time low in relation to the metric by which countries’ aid programs are traditionally compared. Under current  budget settings, this ratio is set to decline further. Postponing aid cuts will not be sufficient to challenge Australia’s new-found status as a confirmed aid laggard.

More details on the new aid budget can be found at the Development Policy Centre’s Australian Aid Tracker.

The authors’ analysis was presented at the 2022 aid budget breakfast on Wednesday 30 March. View the presentation and watch the livestream replay.