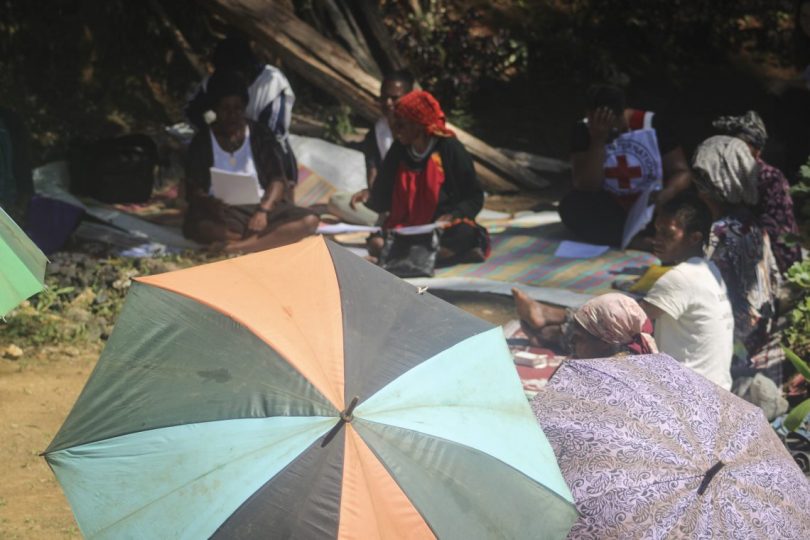 Jessica* makes a choice every day to not let the past torment and ruin her peace of mind. Ten years have gone by but dark memories from a tragic event still follow her. She has gone through hell. Quiet moments to herself still lead to haunting memories. After many years, Jessica has decided to share her story of being accused of sorcery.

Jessica, who is from a village in the Southern Highlands Province of Papua New Guinea, recalls how it all started: “I settled down with my family in a village,” she says. “Things were fine at the beginning but then people start calling me a sorcerer, and with that life was upside down.”

Accusations of sorcery turned into physical abuse, and Jessica was forced to leave her children behind and flee, taking refuge in the village where she grew up. Not long after that, one of her sisters passed away and the people of her community started blaming Jessica for bringing death into the family, accusing her once more of sorcery.

While she was still mourning in the “haus krai” (mourning place), her sister’s family along with other community members attacked her. Jessica fled to the caves in the shadow of nearby mountains to find refuge. She survived there, living in the caves, for almost a year, eventually making her way to the house of the local church pastor, where she was welcomed and offered food and shelter.

Some months ago, the Mental Health and Psychosocial Support (MHPSS) team of the International Committee of the Red Cross (ICRC) reached out to Jessica and invited her to attend sessions designed to help those who experience trauma due to various kinds of violence. Jessica shared that the sessions helped her move on from the past, to pursue a life that would help her build the inner strength to live with and beyond her trauma.

“I attended five support group sessions and met other women from the community who have also suffered in different ways,” she says. “Talking with them helped relieve my pain. I also learned to identify signs of stress in others and ways to help myself cope with it.”

Jessica adds that being shown stress management techniques has also been very useful. She now feels comfortable talking to people again. “I feel I am on the road to recovery and feel much better now,” she says.

Charlotte Blackman, an ICRC delegate in PNG, describes how the ICRC has been training women from the community to be facilitators for support group sessions, like the one Jessica attended.

“These community facilitators identify women within the catchment area of ICRC-supported health facilities who are experiencing high levels of stress and help them through these support groups,” says Charlotte.

“They organise sessions on identifying signs of stress, positive coping, family violence and loss and grief. Jessica was among those who were part of the first batch.”

Though complete healing is a complex and slow process, Jessica now feels confident she will not cave in under the weight of her traumatic memories again.

*Her name has been changed.

Reuben Tabel is a Communications Officer with the International Committee of the Red Cross based in Mount Hagen, Papua New Guinea.