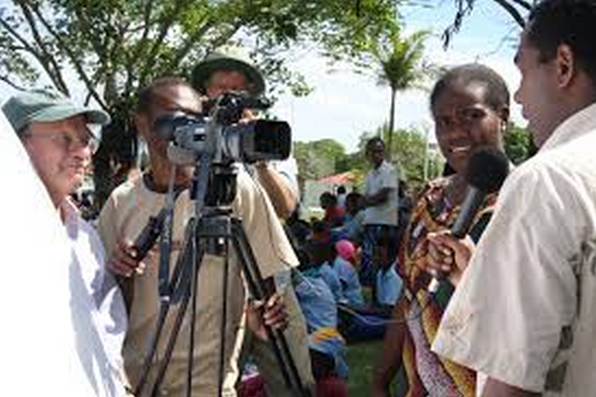 This is the second of a two-part post on media censorship in Fiji. Read Part One here.

Symptomatic of the climate of fear in Fiji is that even journalism educators, already proven to be a threatened species at The University of the South Pacific (USP), are facing broadsides for alleged breaches of the university code of conduct from their employer.

The pair were recent replacements for two other journalism lecturers, one (Marc Edge) was forced to resign after pressure from the Bainimarama Government, and another (Ian Weber)is  also leaving under unusual circumstances unrelated to national politics.

Craddock and Thompson had raised concerns about the refusal of the Ministry of Information to accredit Samisoni Pareti and Netani Rika at the PIDF meeting.

Following the ABC interview given by Brig. Gen. Mosese Tikoitoga, the Commander of the Republic of Fiji Military Forces (RFMF), Mathew Thompson also raised his personal concern that Fiji’s military and police went on peace-keeping missions globally when it was acknowledged by their commander that members had used violence against fellow citizens in Fiji.

Tikoitoga gave the usual justifications, which some members of the public were sympathetic to, and some not. But USP sent Craddock and Thompson an astonishing letter which alleged that their media statements were putting at risk the work permits of new staff and threatening the collective academic freedom of all staff.

The USP letter implied that these two may have behaved in a manner “prejudicial to the peace, good order, good government or morale” in Fiji by publicly criticising the unfair treatment of journalists by the Bainimarama Government, and criticising the military for justifying torture of dissenters.

They were told that their statements had damaged the University by association.

They were reminded that they “did not live in a normal democratic situation” and that “it would be in their interest to refrain from future statements”. It was not clarified whether the threat to “their interest” would come from the Bainimarama Government or from USP management.

Craddock and Thompson were informed that they must apologise to the university, must not reveal any of their discussions with USP management, and refrain from making any adverse comments about USP, very strangely, even after their contract ended.

Furthermore, any further public statements by them must beforehand be circulated to the Director of Marketing, so that the university “was made aware of their interactions with the public”.

While the letter stated that there was a complaint from outside USP, Heather Stadel of USP Human Resources said that that the complaint came from inside the University, but refused to name the complainant.

Somewhere along the way, MIDA Chairman Ashwin Raj (whose substantive work is as a USP staff member) became involved in the fracas, accusing the “reckless academics” of trying to “instill fear in the citizens of Fiji”, demanding that they should have contacted the Ministry of Information and MIDA before making their “gnomic pronouncements about freedom”.

In a communication to the blog Fijileaks, Ashwin Raj also took a tilt at foreign media and journalists: of one well-known media educator (David Robie) he said that his, “lucubration are mired in generalisation. What substantive evidence does he have that we are tightening the noose or gagging media freedom?”  Raj demanded of ABC journalist Campbell Cooney “why should we treat foreign journalists as sacred?” and opined that “ABC reports remain anachronistic and ethnicist”. Raj has also jousted with other Pacific journalists, such as Sean Dorney.

What is surprising to many is that Chairman Ashwin Raj demanded that Craddock and Thompson should have consulted MIDA before issuing any statements, on par with USP management’s demand that Craddock and Thompson should send their public statements to the USP Marketing Office before releasing them to the public. The Orwellian ‘Big Brother’ is alive and well in Fiji and even in universities like USP.

Despite the pressure from USP management, Craddock and Thompson believe that their statements were made as their personal views and in the public interest, in keeping with the principle of academic freedom that USP should be fostering, not constraining. University management did not agree. Recently, they also did all they could to prevent any protests against visiting Indonesian dignitaries for the oppression of Papuan human rights by Indonesia.

The RFMF Commander (Tikoitoga) also got into the act by making a personal phone call to Pat Craddock. These events are all overt, happening very much in the public eye, with bloggers anonymously going to town.

But other subtle pressures on media censorship are not being publicly debated.

The Bainimarama Government announced a few weeks ago, with no public comments whatsoever, that the commercial license of Fiji TV was being renewed, but only for another six months, i.e. until after the September elections.

Fijian Holdings Limited, the owners of Fiji TV, made no comment on this limited license renewal, but at the same time announced a nice dividend for shareholders.

MIDA–whose CEO Ashwin Raj has recently been in the news declaring again how MIDA is focused on the development of a free and robust media–made no comment on this move, which clearly limits Fiji TV’s critical developmental role.

Any responsible stakeholder interested in fostering a free media–whether the owner of Fiji TV, or MIDA, or the many journalists’ associations–should have been up in arms.

No one expects Fiji Sun or FBC TV (the competitor of Fiji TV), both ardent supporters of the Bainimarama Government, to give any fraternal media support to Fiji TV.

All businesses, including media, need to make long term plans for investment and enterprise development, so as to wisely use their capital and available human resources. No management can plan properly if the enterprise is given only six monthly renewals.

The staff of Fiji TV are only too aware that one of their senior staff members (Anish Chand) was summarily dismissed recently, because of pressure from the Bainimarama Government.

The senior and junior employees of Fiji TV now know neither senior management nor shareholders will defend their employment, if their professional approach to their media work were to fall foul of the Bainimarama Government. They are all self-censoring.

It is no coincidence that Fiji TV no longer has the biting critical programs and reporting that it used to have (such as Close Up) before the Bainimarama Government flexed its muscles.

With affected media persons all intimidated into silence, personal experience provides the evidence of necessity.

Contrary to the experience of two decades, this economist has not been invited by Fiji TV for three years to comment on economic issues or programs that might remotely antagonise the Bainimarama Government. When queried about this a few months ago, two senior Fiji TV managers (who both had to depart recently) informed me that I was persona non grata because Fiji TV had to “look after their employees’ jobs”, a sentiment that I can easily understand.

What is also totally out of sight is that the journalists of the Fiji Broadcasting Corporation, both radio and television, have never once contacted me on economic policy stories, as was the norm before the appointment to CEO of Riyaz Khaiyum, brother of the current Attorney General in the Bainimarama Government.

The one glimmer of hope is that The Fiji Times has requested and printed articles from me on election issues in these last two months, subject to approval by their lawyers. The Fiji Times has also gone to town publishing hundreds of ‘Letters to the Editor’ every week, while their competitor, pro-Bainimarama daily publishes only a few every day.

But, when all is said and done, the well-publicised media controversy generated over Samisoni Pareti, Netani Rika, Pat Craddock and Mathew Thompson merely gives Fiji journalists and journalism students a not so subtle reminder that there are strict limits to critical journalism in Fiji.

Neither will the Bainimarama Government, the Fiji Police or the regional University of the South Pacific tolerate any critical media attention on their strengthening relationships with new donor Indonesia, despite West Papua having a prior claim to brotherhood with the MSG, which includes Fiji.

The undermining of Australian and New Zealand influence seems to be a necessary corollary for the emergence of the new powers in the South Pacific. The paradox is that Australia and NZ have not just maintained their aid to the Pacific but strengthened it in many ways, as genuine long term partners.

This is the second of a two-part post on media censorship in Fiji. Read Part One here.