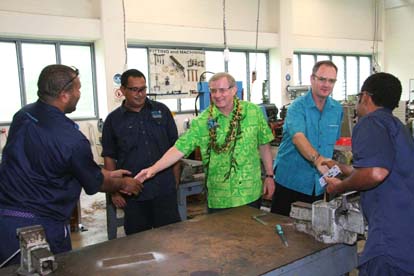 Key policy reports in 2011 argued that Australia needs to change its approach to regionalism in the Pacific islands and rethink its strategy of non-engagement with Fiji’s interim government.  For 2012, we can add to this growing list of policy-change rumblings an urgent need to address Australia’s approach to the PACER-Plus negotiations with the Pacific island states.  Launched in mid-2009, the trade negotiations are currently adrift: with few political champions in Australia or the Pacific and with no shared objectives among the negotiating parties. In this context there is uncertainty as to what, if anything, the PACER-Plus negotiations are likely to achieve. Where did PACER-Plus come from?In the late 1990s, the Australian government was concerned that European exporters and investors could receive preferential treatment in neighbouring Pacific island countries.  So Australia secured an agreement with the island nations and New Zealand which, according to Foreign Minister Alexander Downer, would ‘protect Australian interests in the event that the Forum Island Countries begin negotiations for a free trade agreement or offer improved market access to another country’[i].  In mid-2007 Trade Minister Warren Truss argued that the 2001 agreement, called the Pacific Agreement on Closer Economic Relations (PACER), had been ‘triggered’ by trade negotiations between the Pacific island countries and the EU.  He said the islands were now obliged to negotiate a new trade agreement, to be called PACER-Plus, with Australia and New Zealand.When the Rudd Government came to power, incoming Trade Minister Simon Crean and Parliamentary Secretary for Overseas Development Assistance Bob McMullan proved to be ardent supporters of PACER-Plus, arguing that a free trade agreement would help the Pacific to ‘share in the benefits of increased trade and economic growth’.  They even toured the islands prior to the launch of formal negotiations to explain that PACER-Plus would help to ‘reduce poverty in the region’.

However when McMullan resigned at the 2010 federal election and Crean was replaced by the current Trade Minister Craig Emerson, political support for PACER-Plus dwindled.  In contrast to Crean’s enthusiasm for a regional FTA, Emerson has scarcely mentioned the talks and his April 2011 trade policy statement ‘Trading our way to More Jobs and Prosperity’ mentions all of Australia’s trade negotiations except for PACER-Plus. Furthermore the Australian government’s report to the World Trade Organisation in March 2011, as part of its Sixth Trade Policy Review, also failed to mention PACER-Plus.  Despite these glaring omissions, Parliamentary Secretary for the Pacific Richard Marles says Australia remains committed to negotiations but insists PACER-Plus is not a traditional trade agreement.

And therein lies a key dilemma, for if PACER-Plus is not a ‘traditional trade agreement’ just what is it?  Shadow Trade Minister Julie Bishop says talk that PACER-Plus is not a traditional FTA would come as news to the Department of Foreign Affairs and Trade.  And she may well be right, as DFAT officials have not indicated they plan to negotiate anything substantially different from Australia’s other trade agreements.  There is not much by way of written policy to guide Australian officials either.  The original PACER agreement had provided a series of guiding principles for ‘establishing reciprocal free trade arrangements between the Forum Island Countries and Australia and New Zealand’.  However, when the Fiji government argued that as party to the original PACER, the PACER-Plus negotiations could not go ahead without Fiji’s participation, the Australian government proposed that PACER-Plus was ‘completely separate from the PACER agreement’.  Clearly then, the current talks are not guided by conditions contained in PACER.

For their part, the Pacific island countries have been ‘reluctant to commence negotiations for a comprehensive free trade agreement’.  Island leaders have however expressed a keen interest sending more Pacific workers to Australia and New Zealand for seasonal employment and have been willing to consider options for a somewhat unorthodox ‘trade and development’ agreement.

For most Pacific island countries factors such as geographic and economic distance from external markets and the small size of domestic markets, as well as limited market data for export destinations and very high costs of production, are more significant determinants of export growth than market inefficiencies arising from protectionist policy or ‘regulatory impediments’.  In this context, a standard FTA is unlikely to improve trade performance and would entail considerable adjustment costs.  But what would help to grow Pacific trade?

With young and growing populations many Pacific island states possess a ‘comparative advantage’ in the temporary export of labour.  That both Australia and New Zealand possess significant seasonal labour shortages in sectors such as horticulture and tourism means temporary labour mobility schemes can lead to ‘win-win’ results for all parties. Indeed in December 2011 the Australian government announced it would ‘make permanent’ the existing Pacific Seasonal Workers’ Pilot Scheme and expand it on a trial basis to allow Pacific islanders to work in tourism, other agricultural sectors (such as cotton and sugarcane), and fisheries.

Another area of comparative advantage is in growing tropical fruits and vegetables.  With agriculture-dominated economies, the majority of Pacific islanders (particularly in Melanesian countries) rely on localised food production for their livelihoods.  Gains to be made from increasing exports of high-value tropical crops are estimated to be large, but quarantine restrictions are major obstacles for exports to developed country markets.  The Australian-funded Pacific Horticultural and Agricultural Market Access program aims to address some of the issues involved, but urgent action is needed to address overly burdensome quarantine requirements.  A 2011 study on taro exports for example found there was ‘no scientific basis’ for Australian rules for fresh taro imports and that existing rules undermined a key Pacific export potential.  The 2011 Independent Review of Australian Aid argued that ‘quarantine restrictions should be based on firm science and [should] not place undue restrictions on agricultural imports from Australia’s neighbours’.

Finally, Australia needs to review the current Rules of Origin (RoO) requirements for Pacific exporters.  Originally designed to prevent ‘trade deflection’ – goods passing through the islands to avoid Australian import duties – rules contained in the existing South Pacific Regional Trade and Economic Cooperation Agreement (SPARTECA) fail to reflect Australia’s liberalised tariff regime.  Currently, New Zealand exporters to Australia face less onerous requirements than island exporters, and ad-hoc derogations from the rules are needed for Pacific exports (such as textiles from Fiji and car parts from Samoa).  The island countries should be offered new rules that are as liberal as possible while being sufficient to prevent trade deflection.

If Australia is serious about pursuing trade policy with the Pacific islands that will stimulate development, greater political leadership is needed.  To date, Pacific negotiators have been disappointed with the PACER-Plus talks.  When the islands’ lead negotiator resigned late last year for example, he warned that ‘there is a need for Australia and New Zealand to decide what to put on the table… at the moment there is really nothing of value for the Forum Island Countries’.  Until something of interest is put on the table, it seems PACER-Plus won’t be going anywhere.