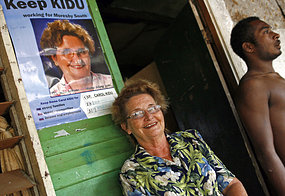 There is no sign that the levels of political intensity will decline any time soon in Papua New Guinea. Conflicts and tensions, both new and old, are evident at institutional and individual levels, with the results playing out on the floor of Parliament (the Speaker of Parliament has announced an investigation into the leader of the opposition, Dame Carol Kidu), in traditional and social media, and in the Supreme Court (O’Neill’s suspension of the chief justice and another senior judge has been stayed). Most recently PM O’Neill declared that his country is in a state of ‘constitutional crisis’ and, on that basis, invoked parliamentary ‘oversight powers’. Meanwhile, there is more widespread concern with the adverse impact of poor governance and weak leadership on service delivery and development in PNG.

The active Facebook group ‘Sharp Talk’ has received a great deal of prominence within the context of the political situation in PNG since late last year.  The rise and rise of social media within the wider framework of increasing access to and use of the internet in our region is the focus of ‘Net Benefits’, a discussion paper released by the Pacific Institute of Public Policy this week. Elsewhere, there is ongoing discussion in Vanuatu about a proposed submarine cable. Whilst in New Zealand, Pacific Fibre is looking to open up this segment of the market, which may bring benefits of fast internet to the Pacific. There is no denying the many and varied effects of better internet access, as seen recently with the announcement of a new mobile app by Melanesian Women in Business.

As Samoans consider seasonal work opportunities in Australia, and ni-Vanuatu seasonal workers are praised in New Zealand, the differing levels of success of the Australian and New Zealand seasonal worker schemes have been discussed at a Development Policy Centre conference. In a discussion paper released by DevPolicy, five reform recommendations were put forward for improving the Australian scheme. Improving this scheme will result in mutual benefits for Australia and the Pacific.

However, according to this blog, it is not expected that PACER Plus will include labour mobility options for Pacific island workers.

Falling out over fisheries

The Western and Central Pacific Fisheries Commission concluded its meeting in Guam last week with the two year ban on fishing of tuna having been partially lifted. The Parties to the Nauru Agreement (FSM, Kiribati, RMI, Nauru, Palau, PNG, Solomon Islands and Tuvalu) expressed concern that the meeting did not place enough focus on the conservation and management of tuna stocks in the Pacific.

Impact of floods in Fiji

The fatal floods throughout Viti Levu have displaced thousands of people and caused widespread damage. A number of donors have provided emergency assistance, including Japan, China, New Zealand, Australia and the US governments, although reaching remote areas is proving difficult.

Extensive damage to crops and the sugar industry is reported, and the floods have caused an estimated FJD 200 million (USD 113 million) of damage to Nadi, which is the heart of the Fiji tourism industry. The frequency of flooding in Fiji has prompted analysis and debate of its causes and possible mitigation strategies such as relocation of urban settlements.

Enhanced relationship between Fiji and China

A delegation from the Department of Public Security from Guangdong Province also visited Fiji for bilateral talks on military and security ties. These talks follow on from a memorandum of understanding signed between the countries in 2011, and further negotiations on military and security cooperation are expected to take place later this year when a Fiji delegation visits China.