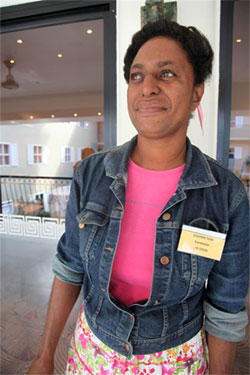 Electoral issues around the region continue to surface following a brief return to violence in Timor Leste after the Fretilin party was excluded from the new government. Votes are still being counted in PNG. In an upset Arthur Somare lost his seat. Two women have so far been confirmed to have won seats, as have incumbent Prime Minister Peter O’Neill and his rival Sir Michael Somare. O’Neill is firming as the favourite to form government, and in a surprise move is understood to be in discussions with Somare about forming a coalition. Sir Michael had recently threatened to jail O’Neill if he got back into power. Outgoing Deputy Prime Minister Belden Namah is ahead in the count in his electorate and is expected to lead a rival bloc to challenge the O’Neill-led group. The full results of the election aren’t expected until next week, and there will be a further period of intense coalition negotiations before parliament sits to vote in a new prime minister.

Solomon Islands prime minister, Gordon Darcy Lilo, says he will re-introduce a political integrity and stability bill before parliament and is seeking bi-partisan support for it.

It has been reported that the New Zealand intelligence services are investigating an alleged assassination plot against Fiji’s military ruler, Commodore Voreqe Bainimarama.

In Fiji, former Prime Minister Mahendra Chaudhry accused the military government of intimidation after members of his Labour party were arrested. The arrests were made before the temporary suspension of the Public Order Amendment Decree that requires a permit for anyone holding a public meeting.

At the same time new decrees on the constitutional process were introduced, attracting criticism for the inclusion of coup amnesty provisions, and the composition of the assembly established to oversee the drafting of the new constitution.

Meanwhile, the Citizens Constitutional Forum and it’s director, Reverend Akuila Yabaki, have been charged with contempt of court for publishing an article critical of the rule of law in Fiji. Also in court is former Prime Minister Laisenia Qarase, who was denied a stay on the corruption charges he faces.

Though most of the Pacific appeared to miss out on the $2.6 billion in aid promised at the recent London family planning summit, the Australian Government is set to double its aid funding for basic reproductive health care, news that has been well received in the Pacific, though how much of the new funding will flow to the Pacific remains to be seen. According to this article, research based on data from Solomon Islands and Vanuatu suggests that every dollar spent on family planning can save approximately $45 in health-care and education costs.

A recent Devpolicy blog has questioned the renewable energy targets of Pacific island countries. Six island governments have adopted plans to generate 100 per cent of electricity from renewable technologies, which have been labelled overly ambitious, especially for small atoll states lacking viable renewable resources. The analysis suggests high renewable energy targets are appropriate in some countries, such as Fiji, with large hydropower potential, and Vanuatu, which has geothermal resources. But in the other cases, targets are seen as an inefficient lobbying mechanism to push larger countries to take action against climate change.

A number of Pacific island countries (Nauru, Marshall Islands, Vanuatu, Samoa, and Cook Islands) have been identified in a Tax Justice Network report that suggests at least $21 trillion is hidden in tax havens.

Meanwhile, a global hunt for $550 million that is allegedly part of a failed Irish property magnate’s missing fortune has focused on Vanuatu. In response ANZ Vanuatu has emphasised Vanuatu’s financial sector is now well regulated and that strict banking controls are in place to thwart money laundering.

At the 12th International Coral Reef Symposium scientists issued a dire warning that a quarter of the world’s reefs are severely degraded, and without immediate action the situation will worsen.  Many of the Pacific’s reefs are damaged, with 85 per cent of the coral triangle, encompassing Papua New Guinea, Solomon Islands and Timor Leste, reportedly under threat. Research presented at the symposium advocated establishing small marine reserves for protecting Pacific reef ecosystems.

As the scramble continues across the Pacific and elsewhere for undersea mining rights, the discovery of big deposits of rare earth metals close to Japan is seen as a major strategic find. While large concentrations were also found in areas of the eastern South Pacific and near Hawaii, the potential for Pacific island countries to benefit remains unknown, with some commentators pessimistic.

In other extractive industry news, landowners in Bougainville have moved closer to an agreement to allow mining giant Rio Tinto back in to develop the Panguna gold and copper mine, while claims that mining is set to generate more revenue than tourism in Fiji have been labelled premature.

In Solomon Islands, Malaita Forum leaders have threatened drastic action unless granted a meeting with the prime minister to discuss gold mining concerns.

$19 million ADB loan for the University of the South Pacific.

So many meetings, so little impact: a critique of the excess of regional health meetings in the Pacific.