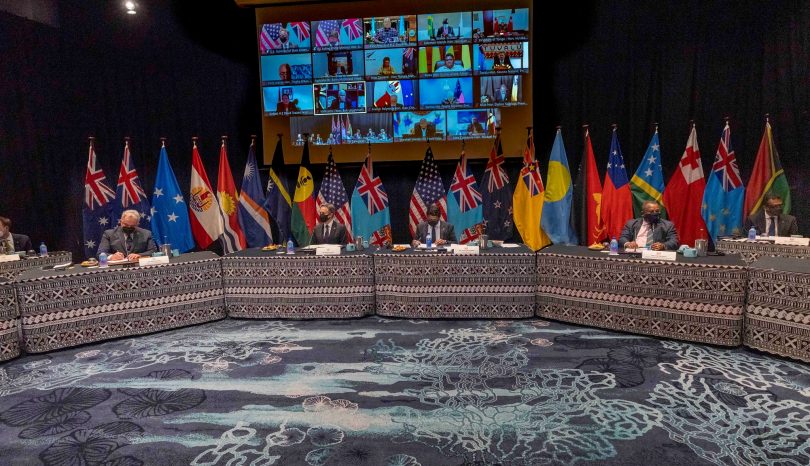 At the end of September President Biden will for the first time host a White House summit with 12 Pacific island nations. While welcoming the initiative, island leaders may be sceptical of the claimed “deep and enduring partnership”, and suggestion that the US is itself a “proud Pacific nation”. US policy towards Oceania has always been driven by strategic interests, and Washington has long focused its resources on the strategically located American-affiliated islands, and relied on allies to sustain Western interests elsewhere in this vast region.

Washington’s new-found interest is clearly a response to China’s increased regional influence. Yet Pacific leaders are interested in what the US has to offer, especially in the face of the existential threat posed by climate change. The rise of China has provided island nations with economic options and new geopolitical leverage. They seek a regional vision that is more than a subset of Washington’s strategic policy towards China, which some argue could result in the “worst war ever”, and want to avoid being drawn into great power rivalry. As Fiji’s Prime Minister Bainimarama put it in May 2022, “our greatest concern isn’t geopolitics – it’s climate change”.

US eagerness to engage reflects anxiety that strengthening relations between China and island countries will erode its strategic dominance in Oceania. The particular concern is that Beijing will establish a Pacific naval facility. In early 2022 a leaked security agreement between China and Solomon Islands included provisions for ship visits as well as the entry of Chinese forces if Chinese personnel or projects were threatened. Senior US officials warned that, if the agreement resulted in “de facto permanent military presence, power-projection capabilities, or a military installation”, Washington would “respond accordingly”.

US officials aim to nurture a relationship “based on mutual respect, mutual trust, and mutual benefits”. However, Vice President Harris’s July address to the Pacific Islands Forum caused some resentment because it appeared to contradict an earlier announcement that Forum Dialogue Partners, including the US and China, would not be invited to participate. The US-led Partners in the Blue Pacific initiative, coordinating the efforts of Western allies, also skirts established processes of regional decision-making. The invitation list for the forthcoming Washington summit is not based on Forum membership – the preferred, more inclusive model for regional engagement – but is limited to island nations that are UN members.

A significant barrier to engagement is delayed implementation of US programs. It took almost a year to jump-start negotiations to renew the economic provisions of the compacts of free association with the Marshall Islands, the Federated States of Micronesia (FSM) and Palau. And it is not clear how soon other key initiatives, including new embassies and an expanded Peace Corps presence, will eventuate. Details of the headline announcement that the US would provide US$600 million over ten years to the Forum Fisheries Agency remain vague, particularly regarding the role of private sector contributions for commercial access to tuna stocks.

Pacific leaders celebrated the election of the Biden administration largely because of its commitment to climate change action. They appreciate Washington’s re-engagement with the COP process, and welcome Special Presidential Envoy John Kerry’s outreach to the islands. Yet they may be alarmed at how easily geopolitics can disrupt discussions between major global emitters, as when China suspended climate talks to protest House Speaker Nancy Pelosi’s visit to Taiwan in August 2022.

Most US support for climate adaptation consists of contributions to organisations like the Green Climate Fund, but these resources are difficult for island states to access. Leaders are acutely conscious that Washington’s climate commitment could change dramatically if the Democrats lose their congressional majorities in the 2022 midterm elections, or fail to win a second term in 2024.

A fundamental problem in US-Pacific dialogue is that island leaders do not regard China as a threat to their security, and do not find US references to “rules-based order” or “bad actors” particularly relevant. Washington objects to China’s militarisation, but from a Pacific perspective it is the Pentagon upping the ante in Oceania, through the AUKUS agreement expanding Australia’s naval capacity to engage with China, increasing military activity in Guam, FSM and Palau, as well as support for the Manus naval facility in Papua New Guinea. These island places represent key nodes in US power projection networks directed by Indo-Pacific Command in Hawaii – and presumably targeted by military planners in Beijing.

Pacific leaders prefer to be engaged on their own terms rather than as part of a wider endeavour to counter China. Their key challenge is to maintain regional solidarity around their own Blue Pacific narrative, which identifies islanders as primary custodians of this oceanic space, while resisting overtures to take sides. Possible lines of fracture include tension between those countries vocal in support of the US presence, and those more muted in their response. In a rare public reprimand of another Pacific island state, in March 2022 President of FSM David Panuelo asked Solomon Islands Prime Minister Sogavare to reconsider the security agreement with China, fearing that the region would become “the epicentre of a future confrontation” between superpowers.

While island countries must tread carefully in their interactions with more powerful actors, it is reasonable for the leaders to push Washington to clarify the “perilous logic of zero-sum competition” lying at the heart of the Indo-Pacific Strategy. The Biden administration might identify what it sees as a legitimate role for China, given its growing economic and political weight, instead of insisting that Beijing (and Pacific island states) simply accept the current regional order. Otherwise, Washington’s promise of a shared future with the Pacific islands region characterised by stability and prosperity seems empty indeed.

Gerard Finin is a former director of the Pacific Islands Development Program, East-West Center, Hawaii, and is currently affiliated with Georgetown University’s Center for Australian, New Zealand, and Pacific Studies.