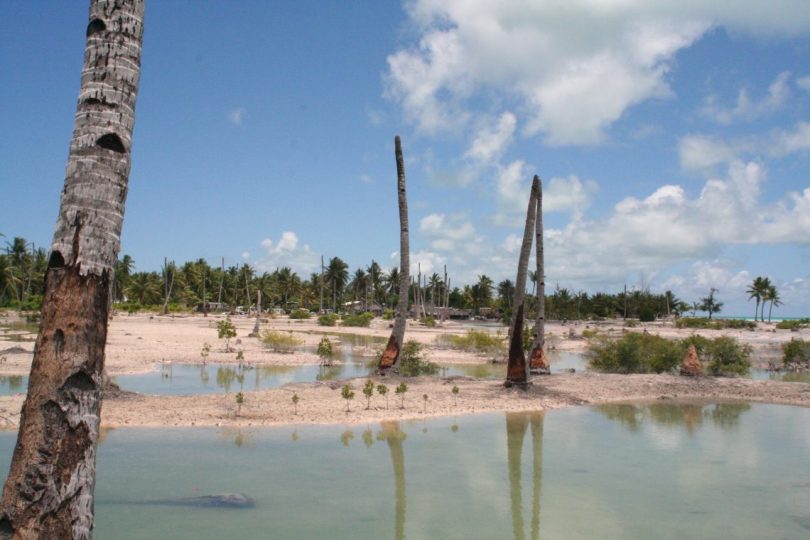 Australia’s ‘Pacific Step-up’ is a whole of Government approach to rethink our relationship with our Pacific neighbours. Australia and China’s relationship has deepened in breadth and complexity. Hawkish tactics alone jeopardise opportunities for both sides to find common ground.

After nearly two decades of living and working in China, the Pacific and Australia, I recognise the serious regional security implications of China’s growing influence. However, China should not be framed as a monomaniacal looming threat.

Rather than trying to compete with China, Australia’s Pacific Step-up should embrace multiple approaches. If we want a healthy relationship with the Pacific, those approaches must centre around Australia taking significant climate action and an inclusive development approach. If we want a healthy relationship with China, essential for regional stability, we must seek to collaborate, rather than treating the development of our closest neighbours like a geopolitical chess board.

Pacific leaders have been clear. In May 2019, they said, “All countries, with no caveats, must agree to take decisive and informative action to reduce global emissions, and ensure at scale mitigation and adaption support for those countries that need it. If we do not, we will lose, we will lose our homes, our ways of life, our wellbeing and our livelihoods. We know this because we are experiencing loss already.” It’s hard to comprehend why Australia’s political leaders don’t see the relationship between climate inaction and growing Chinese influence in the Pacific.

While DFAT has a strong track record of supporting Pacific islands and our Foreign Policy White Paper is clear on the region’s importance, it is undermined by continued domestic inaction on climate change. To be a champion will require direct action, plus more.

First, acting quickly to reduce emissions will show Australia has heard Pacific leaders. Reducing Australia’s pollution by 45 per cent by 2030 and reaching net-zero pollution by 2050 would be a good start, but it is the bare minimum. We must also urgently commit to a just transition to phase out thermal coal exports by 2030.

Second, Australia must champion Pacific Islanders’ enduring sovereign rights over Pacific islands and seascapes, despite the current interpretation of international law of the sea, which questions the ownership of Exclusive Economic Zones (EEZ) once islands are submerged.

Third, we need to rebuild the beleaguered aid program, with the Pacific Step-up and a comprehensive climate change strategy at its heart. It is essential Australia expands programs to help Pacific nations build resilience and adapt to climate change. DFAT has been working on a climate change strategy for more than three years but that strategy has languished in the Minister’s office for the last six months. The Pacific cannot afford to wait for Australia’s domestic politics to align in its favour. It needs the support of a strong aid program guided by a comprehensive and properly resourced climate change strategy. A strategy that goes beyond climate-proofing hard infrastructure to address the climate emergency’s impacts on biodiversity, nutrition, health, and the livelihoods and wellbeing of ordinary people.

Finally, in a worst-case scenario Australia should consider granting permanent residency for the entire populations of nations at greatest risk. I disagree with Kevin Rudd’s suggestion that such arrangements should come at the cost of Pacific nation EEZs. Rather, this safety net should be an act of solidarity, humanity, and mateship.

How Australia must engage on Chinese aid

Australia must accept that increased investment into the Pacific will come not only from China but many other Asian economies as well. Australia should not try to compete with these emerging powers in their strengths, but play to our own strengths and seek opportunities for mutually beneficial collaboration.

Australia’s strength lies in a commitment to proper governance and capacity building in areas like health, education, climate, fisheries and gender; our diaspora of Pacific Islanders who call Australia home; our shared cultural values. These strengths mean we have a role beyond funding to be a champion of the Pacific. There are real regional security issues, like Chinese ports, to be very firm about, but forming technical partnerships with the new Chinese International Development Agency can also build new diplomatic bridges.

China and Australia already have some experience working trilaterally, having recently concluded a three-year Australia-China-Papua New Guinea Pilot Cooperation on Malaria Control. This is a key development issue for Papua New Guinea and the sort of geopolitically neutral issue to which Australia and China could contribute non-competitively.

Working together to help sustainably manage natural resources in the face of a changing climate is another way for China and Australia to support regional sustainable development in a non-competitive way. It would also be in line with the White Paper’s ocean policy and existing initiatives. Pacific inshore fisheries, for example, are crucial to food and nutrition security, provide high-value products that are in-demand among Chinese consumers, and contribute almost as much to Pacific economies as the more commercially lucrative (and often contested) offshore fisheries. It is estimated, however, that 75 per cent of the region’s coastal fisheries will not meet local food security needs by 2030. Australian aid makes important contributions to Pacific coastal fisheries management, but the scale of investment pales against the size of the challenge. This is another opportunity for Australia and China to work together to support Pacific development priorities.

Enhanced collaboration in the Pacific could be the perfect counterbalance to a hawkish approach that would otherwise increase tension and threaten Australia’s complex relationship with China. There are real security concerns, but to make them the centrepiece of our Pacific Step-up will neither re-build our damaged relationship with the Pacific nor deliver for our or the Pacific countries’ interests.

Doors to further trilateral collaboration were apparently opened at a November 2018 meeting between Australia and China’s foreign ministers. While it is not yet clear what this might look like, any such approach must have the needs and sovereignty of Pacific nations at its heart, with a spirit of talanoa and meaningful action guiding it.

This will require a significant scaling-up of Australian aid and a renewed focus, both for China and Australia, on sectors that are aligned with Pacific country priorities and are geopolitically neutral enough to facilitate collective action rather than competition. Climate change adaptation could be a “sweet spot” between these needs.

This is an edited version of an essay published as part of Asia Society Australia’s Disruptive Asia series on ‘bounded engagement’ with China.

Dermot O’Gorman is chief executive officer of the World Wide Fund for Nature-Australia. Between 2001 and 2010 he was the CEO of WWF in the Pacific, and then China.