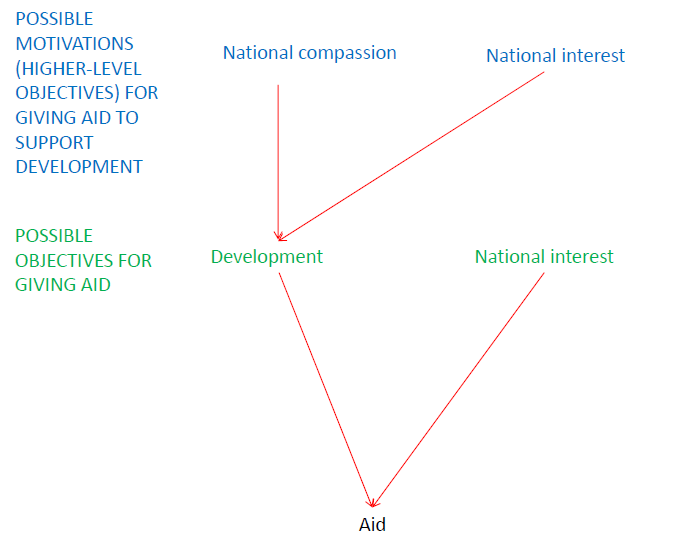 The sparsely-written set of principles released last week by the taskforce to guide the re-integration of AusAID into DFAT at least began in the right place: with an articulation of what the overall objective of Australia’s aid program should be:

This was, as we commented at the time, a return to the formulation of the aid program’s overall objective devised by Alexander Downer as foreign minister in 1996:

The language is almost identical. While, as Robin Davies has argued, a return to the Downer model of aid organization would be a sensible solution to the reintegration of AusAID into DFAT (AusAID as a semi-autonomous agency within DFAT, with direct reporting to the Minister), we can surely do better than return to this Downer formulation for the overall aid objective. (I use this somewhat clumsy term “overall aid objective” throughout to avoid confusion with various individual aid objectives.)

There are two problems with the Downer 1996 formulation. It manages to give too much weight to the national interest as the motivation for supporting development, and too little as an objective for the aid program.

Are we really going to say that we only support development to advance Australia’s national interest? This is what the formulation implies: we give aid to reduce poverty and promote growth, but this is simply a means to pursuing what we are really interested in, our national interest.

But how far is Australia’s national interest served by the immunization of children in Africa? Hardly, if at all. And do we give $500 million to support development in PNG every year only because it is in our national interest? Or do we also actually care about the suffering of our closest neighbour? We try to do something about regional and world poverty not just because it is sometimes in the national interest, but also because of what might be called national compassion: we care enough as a nation to provide a tiny fraction of our public resources to the poor of the world.

The Downer-taskforce formulation, by making the advancement of the national interest the sole motivation for giving aid, is not only inaccurate but demeaning (to ourselves). And it invites unnecessary suspicion, and searches for hidden agendas. “Why are you maintaining our roads? It must be in your national interest. There must be something in it for you.” That was why Downer changed the objective in 2006, to put the national interest at the end of the overall aid objective, and thereby downplay it slightly:

It was a nice try, but ultimately a cosmetic change, as the logic of both formulations is so similar. (‘I will advance X by doing Y.’ is hardly any different to ‘I will do Y “in line with” X.’)

That’s the first problem. The second is that the taskforce’s and Downer’s various formulations give too little weight to the national interest as an actual objective of the aid program, alongside and sometimes competing with development, rather than something which is only pursued indirectly through support for development. They  fail to recognize that the national interest is an active and direct shaper of the aid program, the pursuit of which leads to choices that we wouldn’t make if our sole objective was a developmental one.

The Independent Review of Aid Effectiveness put it directly: “Australia also has interests in activities that directly impinge on us such as people smuggling or illegal fishing.” And we have specific interests in specific regions. These interests have in the past influenced what we do with our aid – they have influenced where we give aid and what we give aid to. And they continue to today, as Annemaree O’Keefe reminds us here.

Do we really give aid to the Kokoda trail region or to Manus Island because we have worked out that is the best way to reduce poverty in PNG? Of course not.

I mention the Independent Review because Sandy Hollway, our Chair, was determined to do a better job of explaining the role of the national interest in the aid program. We came up with this formulation for the overall aid objective:

(D)  “The fundamental objective of Australian aid is to help people overcome poverty. We work to improve the lives of those living in conditions far below what Australians find acceptable. We focus our resources and effort on areas of national interest, and where Australia can make a real difference.”

This avoided talking about the motivations for supporting development, and instead stuck to objectives for aid. It gave poverty reduction the central place, but then went on to acknowledge that the national interest also played a significant role in shaping the aid program. This caught the idea that pursuing the national interest shouldn’t be as important for our aid as reducing poverty, but can’t be given zero weight either.

To me, it struck the right balance. The Hollway Review argued that national interest considerations should mainly come into play through country allocations, and “only rarely” through individual activities or sectoral choices.

Unfortunately, and without explanation, the Rudd-Gillard Government put forward a revised formulation:

(E)   “The fundamental purpose of Australian aid is to help people overcome poverty. This also serves Australia’s national interests by promoting stability and prosperity both in our region and beyond. We focus our effort in areas where Australia can make a difference and where our resources can most effectively and efficiently be deployed.”

If this is all too confusing, have a look at the graphic below. My argument is that, however we formulate the overall objective of the aid program, we should avoid specifying the motivations (or higher-level objectives) for using aid to support development, since we have a mix of motivations and it doesn’t really matter anyway (as the precise mix doesn’t lead to different decisions about aid). We should rather, because it is operationally pertinent, be explicit about the mix of objectives for giving aid. While sometimes different aid objectives will lead to the same aid decisions, there will also be trade-offs, and so different decisions depending on the weight given to each. In summary, we should talk about the national interest as an objective not a motivation.

Bearing all this in mind, what should the formulation of the overall aid objective look like? The starting point should be the Hollway formulation. By all means, put the emphasis explicitly on growth as well as poverty reduction if the Government wants to signal a renewed emphasis on economic development. And drop the second sentence (“We work to improve the lives of those living in conditions far below what Australians find acceptable.”). After all, it is just a background statement of fact, though I imagine it is one that might resonate with the public, which is why we included it.

These changes to the Hollway formulation would then give:

(F)   “The fundamental objective of Australian aid is to promote economic growth and poverty reduction. We focus our resources and effort on areas of national interest, and where Australia can make a real difference.”

I would hope that the Coalition, even though it has signalled that it wants to give greater weight to the national interest, would still be prepared to put development as the fundamental objective of the aid program. If not, it could move to a simpler formulation:

(G)   “The objectives of Australian aid are to promote economic growth and poverty reduction and to promote the national interest.”

By all means let’s have a debate about the appropriate role of the national interest in aid. But let’s have it using clear language, as a choice between the two formulations of the overall aid objective immediately above, (F) and (G). My vote is for (F).