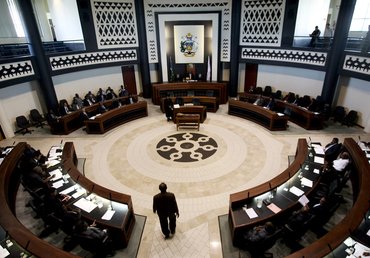 The Election scheduled for 19th November 2014 will be the first since the Regional Assistance Mission to Solomon Islands (RAMSI) ended its military deployment and whittled back its executive policing presence in mid-2013. It provides a key test of whether RAMSI can further wind down operations, and of the capacity of the new look Royal Solomon Islands Police Force to handle security challenges on its own. In 2006, elections were followed by major riots in the capital, Honiara. There have since been other politically-triggered disturbances. In case trouble does flare, Australia has deployed an additional 90 officers, including riot police.

Elections in Solomon Islands are invariably difficult to predict. Around half of the 50-members of parliament usually lose their seats. The other half tend to be organized very loosely into political parties that are little more than fluid parliamentary factions. Party loyalties are easily abandoned. Once outcomes are decided in the 50 constituencies, the MPs gradually arrive in Honiara and usually separate into camps located at the town’s major hotels: the Honiara Hotel, the Heritage Park Hotel, the Pacific Casino Hotel or the Iron Bottom Sound. The lead up to Prime Ministerial elections can be a period of intense instability, as MPs shift between the camps in the hope of obtaining ministerial portfolios or other rewards and as unscrupulous businessmen seek to acquire influence over the incoming government. The new 2014 Political Parties Act may shape the process this time around, but it will not halt the familiar style of competition between camps.

The November election is the first to use a new system of biometric registration (based on a system delivered by the same Canadian company that prepared the rolls for Fiji’s September 2014 election). The new system has effective controls against duplicate registrations. As Figure 1 shows, the result has been a dramatic decline in voter numbers, particularly in the Honiara constituencies and on Malaita. In 2010, the three Honiara electorates had on average just under 37,000 voters whereas under the new system they average just under 11,000 voters. Registered voters have fallen in all but four of the Solomon Islands 50 constituencies. Overall, the number of registered voters has declined from 448,189 to 298,104, a reduction of one third.

In the past, many Solomon islanders have registered twice, but this was not necessarily because they intended to vote twice. Often, voters who lived in Honiara wanted to return to their home islands to vote. Frequently, town-dwellers wanted to vote in the urban municipal council elections, but preferred to avoid casting ballots for general elections in the large, diffuse and multi-ethnic Honiara electorates where outcomes can be haphazard and difficult to predict. In many cases, family members back home used to register their relatives who work in Honiara, the capital, sometimes even without their knowledge. There exist no provisions for out of area voting, though citizens were – under the new system — allowed to register in Honiara to cast ballots in the outer island electorates. Under the old system, a fallback option if one could not get home on election-day was to vote instead in Honiara. Under the new system, those town-dwellers who have registered outside the capital will be obliged to travel home. In past elections, citizens’ need to get home on election day has been addressed by loggers and other business operators who are willing to fund travel back to the islands, and seek thereby to influence electoral loyalties.

There is little evidence that the former system encouraged multiple voting. The practice of inking the finger guarded fairly effectively against duplicate voting. In previous elections, the Honiara electorates may have been much larger than elsewhere, but turnout tended to be way below the rest of the country. Voters may have been registered in the town, but they did not cast their ballots there.

The new 2014 Political Parties Act may, in theory, shape the post-election government formation process. Influenced by Papua New Guinea’s 2002-3 Organic Law on Political Parties and Candidates (OLIPPAC), the new Solomon Islands law establishes an Office of the Registrar of Parties and introduces government funding of political parties. Potentially the most important provision in the Act is in Schedule 2 which specifies that, after a general election, the leader of the largest party or coalition shall ‘be nominated as Prime Minister when the Governor General calls for nomination for the election of the Prime Minister’. The trouble is that the new law does not state that there be only one nomination, and thus it does not preclude anyone else from being nominated. In next week’s elections, many cabinet ministers are contesting as independents, and thus are clearly not taking seriously the risk that they may be disadvantaged by being outside a political party during the subsequent Prime Ministerial election race.

By contrast, the Papua New Guinea OLIPPAC does not simply provide that the leader of the largest party be nominated, but that he or she be invited to form a government.  It states that ‘the election commission shall advise the Head of State of the registered political party which has endorsed the greatest number of candidates declared elected in the election and the Head of State, acting with, and in accordance with, the advice of the Electoral Commission, shall invite that registered political party to form a government’ (OLIPPAC 2003 S. 63).

The risk with the Solomon Islands provision is that it may in fact string out the process of Prime Ministerial selection, and thus increase rather than reduce political tension. Whoever becomes the leader of the largest party or coalition is likely to insist on an interpretation that allows only a solitary nomination. The others are likely to contest that reading of the act. If the matter goes to court, the judges will struggle to fathom a poorly drafted law, and will have little guidance as regards how to interpret the highly politicized role which has been foisted upon them. If ultimately, they hand the matter back for a decision through the political processes of parliament, all that would have been achieved by the reform is to delay and extend what Is anyway often a difficult and troubled process in Solomon Islands. The better option would have been to agree a clear-cut PNG-style provision entitling the largest party to first crack at forming a government or to settle for nothing at all.

Over the longer-run, reformists in Melanesia might be better off abandoning their efforts to ‘stabilize’ parliamentary systems by adopting so-called party strengthening legislation. If there is such a strong desire to give governments a firm mandate, and/or to avoid mid-term removal of governments through ‘no confidence’ votes, the better alternative would be to consider instead presidential systems, where the head of government acquires a direct popular mandate and can only be removed mid-term by some form of impeachment process.

Jon Fraenkel is a Professor of Comparative Politics at Victoria University of Wellington. He was an election observer with the Pacific Islands Forum team in 2006 and with the Australian team in 2010.