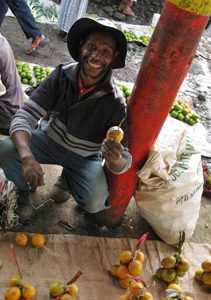 During the recent 2012 Pacific Update at the ANU, Bart Philemon observed that while LNG projects promise jobs, they are likely to benefit only “top graduates who constitute a mere 20-30 percent of those seeking work”. The former PNG Treasurer posed the question: “what will other job seekers do in a saturated market where there is up to a 60 percent unemployment rate”.

Mr Philemon was pointing to a real problem; however, his reference to unemployment appears to imply that the solution must be found in the creation of jobs. This is unlikely to happen, and certainly not in sufficient numbers to absorb the job-seekers to whom he refers. Framing the problem in terms of formal job opportunities misses the potential of non-formal income sources.PNG needs more sources of self-employment; it needs a wider range of activities which enable people to earn money. In other words, it needs a larger and more productive informal economy.

An informal economy will be found in both urban and rural areas and will be supported by strong rural-urban links, with mobility of people, commodities and money between town and countryside. In the developing world the great majority of small farmers are not fully commercialised. Instead, they get most of their income from a portfolio of economic activities, taking advantage of multiple income sources. Typically, smallholder livelihoods combine formal and informal, farm and off-farm, urban and rural activities. Such flexibility is facilitated by improved roads and rapidly growing flows of people between rural and urban areas, which further assist in linking low income rural producers with low income urban consumers. Mobile phones now facilitate rural-urban linkages by providing better access to information about markets and employment opportunities.

Informal markets also have a downside, including poor ‘traceability’ of market supplies, which hampers efforts to improve food safety. Marketplaces may also have negative environmental impacts and worker and consumer welfare issues may be neglected. Instances of corruption, criminality, monopolies and cartels are relatively common. These and other negative consequences must be addressed by an informal economy policy framework.

In PNG there is evidence of both positive rural change and increasing rural-urban links, as well as some of the socially undesirable phenomena noted above. Movements of produce to urban markets have greatly increased over time, and new roadside markets have emerged spontaneously at strategic places in the countryside. Meanwhile, the producer-sellers who used to dominate marketplaces are giving way to specialised traders and distributors. These trends are nowhere more apparent than in betel nut marketing. This trade may be the prototype for a modernising and productive informal economy in PNG, notwithstanding some knotty problems connected with the consumption of buai (as distinct from its production and distribution).

The adoption of a National Policy for the Informal  Economy by PNG in 2010 marked a recognition that informal economic activity has the potential to yield both macroeconomic and distributional benefits, with the latter of particular significance in light of the resources boom. The retirement of Dame Carol Kidu, the principal driver behind the policy, together with some subsequent administrative inertia, has slowed down the necessary follow-up planning and activities. However, the Consultative Implementation and Monitoring Council (CIMC) have continued to push the informal economy agenda forward.

There is a vision to create a secretariat to house the policy and administer the relevant legislation (currently the Informal Sector Development and Control Act 2004), and thereby to secure continuity in the allocation of resources. It will be critical for Government, through the Department for Community Development (its lead implementing agency), to show the political will needed to bed down the policy. An early priority is to conduct a review of the Informal Sector Development and Control Act in light of the new national policy. The CIMC will be working on this review with the Department and the Constitutional Law Reform Commission. Since the Employment Act and the National Employment Policy are now under review, it will also be crucial to ensure that these processes give due consideration to the informal economy. Finally, given the importance attached by Government to the SME (small and medium enterprise) sector, it will be necessary to foster wider understanding of the quite distinct and different characters and needs of micro enterprises in the informal economy.

The national policy has a two-armed focus. First, the provision of the public goods and services needed to facilitate the growth of a vibrant informal economy, and second, the financial inclusion of the people who operate within the informal economy. The CIMC services two sub-committees that are planning for the implementation of the national policy, and has found some influential supporters. The Bank of Papua New Guinea (the central bank) chairs the committee working on financial inclusion, while the Department of National Planning and Monitoring heads the committee concerned with the provision of public goods and services.

Thus far the provision of public goods and services has been seen primarily in terms of improving the marketplaces in which much informal trade is conducted and making them run more efficiently. Proposed changes include: the creation of a model marketplace to serve as a benchmark for authorities around the country; the improvement of the collection of market vendor fees; cooperation with NCDC and UNWOMEN in the ‘Safe cities market programme’; and the establishment of a phone ‘hotline’ for market participants to report crime and other abuses. This will also be trialled as a means of connecting vendors with commercial buyers. In recognition of the need for market operators to have a voice, it is suggested that a Chamber of Informal Economy be established to operate at local, provincial and national levels.

These are useful starting points, but they also suggest that the informal economy is still seen largely in terms of physical marketplaces. If so, this is a less than adequate understanding of the full potential and extent of an urban informal economy and of the public measures needed to encourage it.

Another question concerns the weighting to be given to issues of equity and efficiency in determining government interventions, specifically, the degree to which stimulating the informal economy is seen as a social welfare measure, rather than an exercise in allowing markets (as distinct from marketplaces) to  operate more effectively. Getting this right will require a fine balance, but we must remember that the term ‘informal economy’ was adopted in place of the original ‘informal sector’ to focus attention on it as a phenomenon requiring the attention of economic policymakers.

The committee dealing with financial inclusion, chaired by the central bank, has benefited from a fortunate convergence of forces now occurring in PNG. These include: the central bank’s active participation in the global movement for financial inclusion; its partnership with the Asian Development Bank in developing the microfinance sector and crafting appropriate regulation for it; the growing efforts of commercial banks to extend and tailor services to people on a low income;  and, most significantly, Telco deregulation and the entry of Digicel to the mobile telephone market.

The CIMC has proposed, and the central bank has endorsed, a Financial Inclusion Expo to be held in Lae at the end of November. Other initiatives include: conducting studies of ‘financial capacity’ and micro-insurance; the enactment of legislation (the Private Property Security Act) enabling non-land assets to be pledged as collateral for loans; plans for the creation of a Centre for Excellence in Financial Inclusion and; the rollout by commercial banks of innovative service approaches, including ‘no frills’ basic accounts, ‘electric wallets’ for mobile phone users, and ‘in-store’ (or branchless) banking. The CIMC and its subcommittees under the Informal Economy Sectoral Committee will monitor these and other developments to assess their relevance to the needs of informal economy operators and will lobby for policy and legislative changes that promote financial inclusion in PNG.

Future initiatives should look beyond physical marketplaces and consider how to stimulate growing activity in an informal service sector in both rural and urban areas. A crucial need is to bridge the knowledge gap evident from the limited ‘know how’ and imagination of informal economy operators, who have little concept of the wealth of activities in petty services and manufacturing in Asia. There are plans for an “audit” of existing informal economic activity, but this must focus on qualitative issues (documenting the ‘what’ and the ‘how’) rather than attempting quantification. There are also plans for study tours to neighbouring countries to “identify opportunities”. The danger is that these will be eagerly undertaken before officials understand the mechanics and capacity of PNG’s existing informal economy.

John Conroy is a Visiting Fellow at ANU’s Crawford School. Busa Jeremiah Wenogo is a Project Officer (economics) at the Consultive Monitoring and Implementation Committee in Port Moresby.