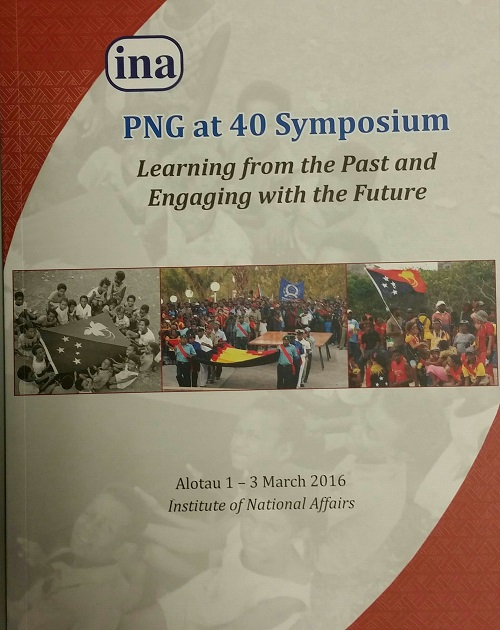 By the global standards of newly independent nations, Papua New Guinea experienced a relatively smooth transition to nationhood and comparatively untraumatic, or at least peaceful subsequent years. Although some observers predicted turmoil and breakup of the country upon Independence from Australia in 1975, instead PNG has remained intact and sustains a vibrant democracy, despite ongoing stresses and some clear aberrations from most political norms (not least the pursuit of politics seemingly oversubscribed, and not entirely for altruistic reasons).

Although much has certainly been achieved in PNG over the past 41 years, the optimism that overtook much of the population around Independence has morphed for many into a level of disappointment and frustration over aspects of the country’s economic, social, political and cultural development.

Maybe the expectations at Independence were unrealistically high, and have been further fuelled by constant promises of wealth emanating from the country’s resources, which for much of the population (including those termed ‘resource owners’) have not converted into reality. Instead, access to economic opportunities and quality public goods and services has proven limited, especially in rural parts of the country seemingly deteriorated, whilst violent crime, and particularly violence against women and children, remain a constant threat in the major urban centres.

Often referred to as PNG’s ‘paradox of development’, resource wealth and periods of strong economic growth have failed to date to deliver broad-based and sustained economic and social opportunities, including strong and satisfactory improvement in social indicators. PNG is not alone in experiencing such travails of development, aspects of which are sometimes termed the the ‘Resourse Curse’, but the country should be able to achieve more meaningful improvements for the lives of its population into the future without forfeiting its cultural or environmental heritage, which are featured strongly in the National Constitution.

The PNG at 40 Symposium was organised by the Institute of National Affairs (INA) to bring together a team of dedicated persons with an immense wealth of experience of policy making and its application in PNG, to reflect on lessons and experience from the past and to contribute to preparing for and addressing the challenges of the future. The Symposium, held in March 2016 in Alotau, was intended to develop a home-grown, constructively critical and useful analysis of PNG’s forty years of independence, and to extract what can be learned from that experience to address current issues and inform future planning. It is hoped the symposium’s output will make a significant and practical contribution to the challenging and continuing task of nation-building.

The three-day, by-invitation symposium was attended by 40 men and women who have been, are and intend to be engaged in shaping PNG’s political and economic development. They came from all walks of life: political, governmental, non-governmental, private sector, academia and the churches, and almost entirely Papua New Guineans.

Nine papers were commissioned from participants for presentation. The subjects fell within four broad themes – (i) PNG as a nation-state, (ii) PNG as a developing economy, (iii) PNG as an ethnically diverse society, and (iv) PNG in the Pacific, Asia and the world.

Participants debated the issues raised by the papers, shared observations and insights, analysed lessons from past experience, and collectively reached reasoned conclusions about what lies ahead, and how PNG can best manage and influence current and foreseeable problems and issues.

A final session was devoted to Shaping and Building PNG’s future. Here, the participants built on the conclusions reached in the prior nine sessions and narrowed these down to Five Strategic Priorities:

A central concern of the Symposium was the declining adherence to the rule of law and established systems and processes, including the National Constitution, both in government and across society. There was considerable discussion over the suitability of the Westminster system, as currently applied, and the vacuum associated with the shift from traditional Melanesian leadership and accountability arrangements to new and relatively alien systems of government (despite the recognition for traditional ways highlighted in the Constitution). However, it was emphasised that whatever system of government applies or is adapted over time, respect and adherence to the rule of law and accepted rules for society form the basis of a working society. Much needs to be done to reverse the slippage from that principle that has occurred over the years in most spheres of public life and accountability, both at the political and public service levels and more widely through society, in order to ensure the necessary and steady improvement in social and economic opportunities for the nation’s entire population.

Another major focus of the Symposium was the relevance of the economic model followed by PNG over these decades, and the measurement of economic and social progress. The relevance, let alone accuracy of measurement, of GDP and even GDP per capita were subject to scrutiny, along with the focus upon the extractive sector, with its associated major fluctuations and economic distortions and limited direct positive impact upon most of the country’s households – particularly where project negotiations and oversight by the State are weak, and the level and/or utilisation of the benefit flow is poorly administered.

A further focus was on the failure to recognise and strengthen awareness and respect for PNG’s diverse traditional knowledge and ways, and how to encourage the development of a contemporary culture – built upon and proud of its PNG and Melanesian roots, carving a national identity, pride and unity – whilst also addressing the apparent and growing economic and social pains experienced within PNG society. These pains have been particularly associated with economic, social, demographic and cultural change and disorientation, including urbanisation and the mixing of people from different societies and traditions.

It was also emphasised that positive progress can only be achieved through achieving some national consensus, with government, the private sector, and wider civil society all playing their part. This may take time, and will clearly require community members to be ready to hold their leaders – even when those leaders are their own clansmen – accountable. However, awareness, frustration and pressures within society, not least from greater access to information and social media, are clearly driving towards requiring greater progress and accountability.

The Symposium report [pdf] includes a Summary of Discussions to capture the essence of each of the nine papers and dialogue. It then presents the Five Strategic Priorities, including the issues identified by participants and their suggested courses of action. All nine papers are also included.

The Symposium was intended to inform and contribute to wider public debate across PNG on key development challenges, but the time available for discussion of these priorities during the Symposium was limited, so follow up sessions are envisaged to develop each of the themes further, including the development of more concrete action plans. These will entail the Symposium participants themselves, as well as wider public engagement. Some such follow up has already proceeded, including civil society consultations in Madang in February 2017, and drawing upon specific papers, such as on leadership during the CIMC 2017 Regional Development Forums, and on the economy in workshops with Sir Brown Bai.

Paul Barker is the Executive Director of the Institute of National Affairs in Papua New Guinea.