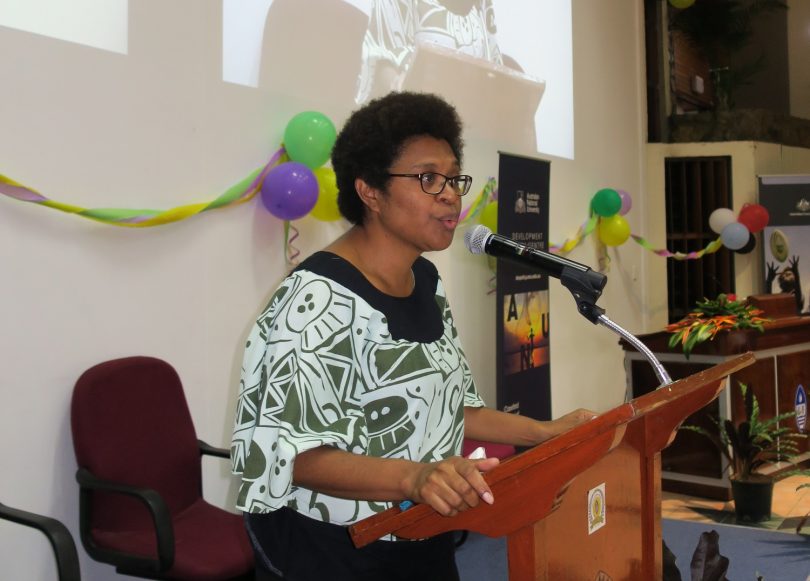 I would like to share some thoughts on PNG after the elections. My reflections are based on nearly twenty years’ experience as a researcher. It has been a little over a week since PNG’s 10th National Parliament convened. The last three months has been a busy time for election officials, media and security personnel. In some places elections have been relatively peaceful. People voted and life carried on, but in other parts of the country, violence and the unnecessary and unfortunate loss of lives has marred these elections. My observation of media reports and preliminary findings from research into women and elections in Morobe by my colleagues Mary Fairio and Sarah Kaut-Nasengom reveals that flawed electoral rolls have led to great disappointment for many people who have not been able to cast their vote.

On the international agenda, APEC 2018 is a key event that will help shape Papua New Guinea’s future. At the national level, the Bougainville referendum will be an important event for PNG as the outcome of the referendum will not only dictate the political future of Bougainville and PNG but it will also set a precedent for those provinces advocating autonomy.

Unfortunately for the next five years, we shall not be seeing any women on the floor of parliament. In her inaugural address, the United States Ambassador Ms Catherine Ebert-Grey stated that the fact that we have no women in parliament should be of grave concern. While this is a depressing outcome of the elections it also clearly indicates the need to reassess and re-strategise how we think about this issue.

I think we need to look at the bigger picture. In analysing the performance of some of the women who came in the top three places for certain seats, we can see that women are receiving votes. For example, Delilah Gore led in the first preference votes and the second preference votes. She lost by just over 200 votes in the final count.

We also know that women are leaders in their communities. In my experience of researching both in urban and rural communities, everywhere I have worked, women leaders always turn up when research meetings are organised and they articulate their concerns clearly. The leadership capabilities of women at the local level is evident as we know from the last local level government elections where forty-five women were voted into local government, with a couple as Town Mayors.

As Papua New Guineans, we need to ask ourselves the hard questions such as, should we be talking about getting women into parliament in terms of gender equality and participation or should we be talking about what makes a good leader? Also, when we talk about getting women into parliament, are we using the right language when addressing different audiences?

Getting women into parliament is not only about discussing these issues in forums such as the PNG Update, but in my view it is also about trying our best to understand the ways in which our people think about gender. I make this comment because often this issue is viewed as a western agenda, maybe because we use words and definitions that are not familiar to the majority of our people. But if we look back to the Constitutional Planning Committee (CPC) report of 1974 we see that this was something that our leaders clearly thought about. If we take off the western gender lens that we often use to have these discussions and start to unpack gender relations in a way that allows us to see the worldview of our people, we will start to map a way forward that is inclusive of everyone.

A lot of the debate around having women in parliament is hinged on the idea of gender equality and equal participation in the development of this country. We use this word ‘development’ but what does it mean to different communities? For some it means access to good roads so they can sell their cocoa and coffee and access health care. For others, it may mean access to clean water and sanitation, for some it may mean four-lane highways and a mall. This one word can trigger discussions about all kinds of things and the ways that we imagine development and our future.

I also like to – every now and then – read bits and pieces of the CPC report just to remind myself of what the members of the CPC imagined our future to be. As a researcher whose work is now mostly in the urban sphere, there are two statements from the CPC that I often read. I will only read the first part here of paragraph 116:

We see the darkness of neon lights, we see the despair and loneliness in urban cities. We see the alienation from man that is the result of the present machine oriented economy. We see true social security and man’s happiness being diminished in the name of economic progress.

When I read this, I can see that the future was predicted accurately, but then two paragraphs later the CPC report states:

Our ways emphasise community. We exercise our rights in the context of our obligations to our community.

This sentence alone gives me some sense of hope because yes in the urban context we are now seeing increased poverty in our cities but also in my experience of growing up in this city, of living in an urban settlement as part of my PhD, and of my more recent research with urban village courts, I can see that we still hold firm many of these traits which we call our Papua New Guinean ways.

In the urban setting, we exercise these ideals by doing kinship through our street, church, sporting and work communities and it is through this sense of belonging that we need to start to address the many social issues that we face as a nation, including our high rates of violence, gender based violence (not just domestic violence but sorcery related accusation violence which many of our people suffer from) and child abuse. For when we start to harness the positive things about who we are – as people from different provinces and regions – we will build a better future for our children and their children.

Finally, my call today to you as my fellow academics, policy makers and students is to start to decolonise the way we think about development, let’s strive to understand our people better instead of resorting to calling ourselves uncivilised and uneducated when our people fail to understand concepts and words that are not in their vernacular. Instead let’s build on our strengths and work towards localising global concepts such as the SDGs, so that we can meet our international commitments, but also so that we can see the change that we want to see in our country.

Dr Fiona Hukula is Program Leader of the Building Safer Communities at the PNG National Research Institute. She also oversees the Gender in PNG research program at NRI with her colleague Dr Elizabeth Kopel. This post is adapted from her keynote presentation at the 2017 PNG Update.