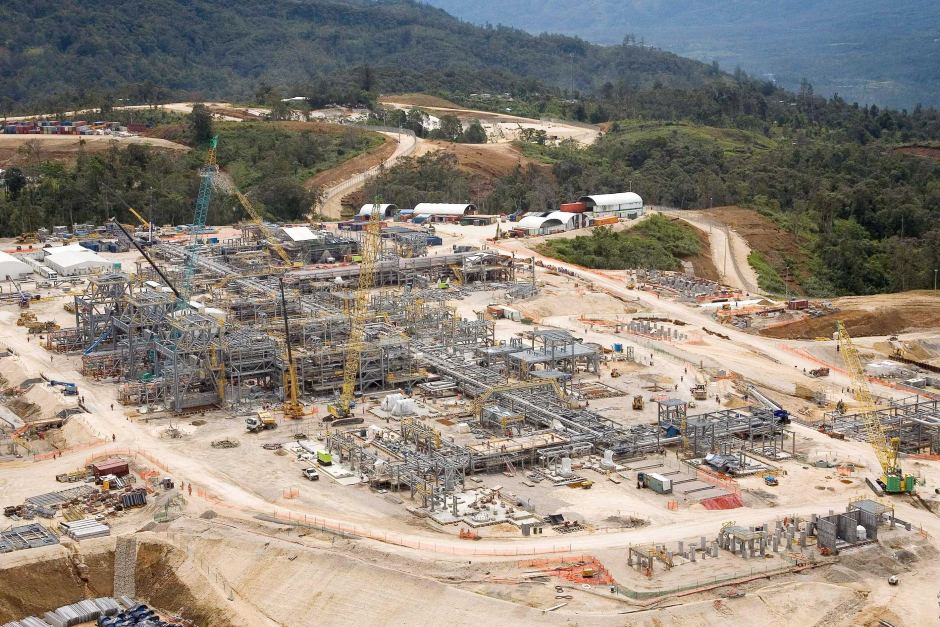 PNG’s extractive sector is set to expand, with the construction of the next mega-project – the Papua LNG project – about to start this year. In light of this, a new discussion paper analyses the employment and skills development impacts of the Liquefied Natural Gas (LNG) project in PNG. Lessons from the US $19 billion PNG LNG investment, the largest resource project ever completed in the country, can inform workforce development for future projects.

The construction of the PNG LNG project began in 2010 and the first gas shipment was made in May 2014. The project construction phase saw unprecedented growth in formal employment. Data provided by ExxonMobil suggest that at its peak, the project employed an estimated 21,220 workers, of which less than 8,500 were Papua New Guineans. When the project construction phase ended in 2014, the number of jobs on the PNG LNG project fell to about 2,000, with some 1,500 jobs for Papua New Guineans (see Figure 1). 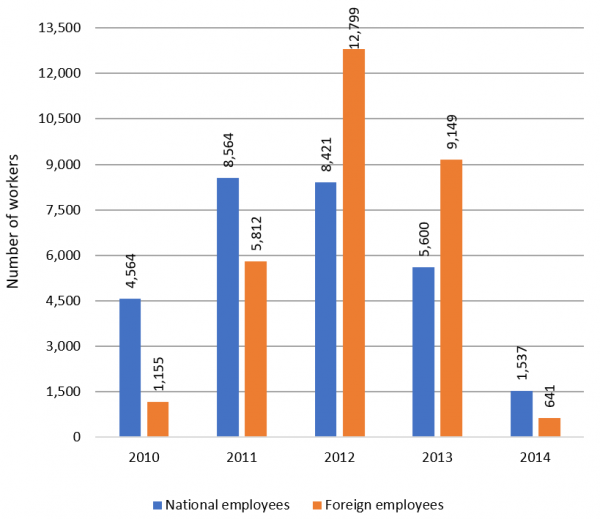 The majority of skilled nationals who worked on the PNG LNG project were likely poached from other companies. However, no figures are available to show how many of the skilled workers who resigned from previous positions to work on the project were replaced by Papua New Guineans, thereby creating local employment opportunities. It is therefore impossible to determine the number of additional skilled nationals who may have gained employment in the PNG LNG project.

In contrast, low-skilled labour is readily available, and low-skilled Papua New Guineans from project areas were recruited as preferred area employees. During the construction phase, they made up the majority of the local workforce, but received little training, and their time on the project was short. As construction of roads, pipelines and other infrastructure moved on, workers living near the new areas were recruited instead, so few workers had the opportunity to make a permanent transition into the formal workforce.

Although no data is available, the recruitment of preferred area employees has increased the proportion of project workers from mining areas and host provinces. Oxfam’s study in four villages closest to the Central Province LNG plant revealed increased incomes, but many villagers also expressed concerns about the large number of foreign workers.

The lack of technical and vocational skills and experience of working on large, complex, projects resulted in many positions being filled by foreign workers. The Department of Labour and Industrial Relations (DLIR) facilitated the employment of foreigners on the PNG LNG project in several ways. It established an “LNG Priority Line” which guaranteed a quick turnaround time of ten days for processing  work permit applications, instead of the usual 42 days. Some of the work permit requirements were also lifted, and the Employment of Non-Citizens (Amendment) Act 2008 exempted ExxonMobil from advertising in PNG to find suitable citizens before offering positions to non-citizens.

Most foreigners worked as managers, engineers, technicians, and qualified tradespeople. The shortage of welders was particularly acute – according to DLIR, PNG had less than 600 licensed welders, but more than 5,000 were needed when construction began, so large number of specialist welders were imported, mostly from the Philippines. The Project Agreement between ExxonMobil and the PNG government is not publicly available, but is widely assumed to contain only vague and general commitments regarding training and localisation of workforce. Close to 100 local welders were trained during the LNG project but it is not clear where they now work, and the number of welders registered in PNG is still at under 600.

The number of LNG Project jobs has fallen substantially since the end of construction (see Figure 1). And skill shortages have become less severe. While there are enough welders, electricians and fitters to operate the LNG project, there is a shortage of process technicians (or plant room operators) who can operate the LNG plant.

The overall impact of the project on employment is difficult to determine because the LNG workforce was not monitored. A manager of one recruitment agency told us “there are now many workers with the experience of working on a large, world-class project. They were [however] used to huge salaries which created expectations that cannot be fulfilled outside of the LNG project… Some are currently registered in databases and are waiting for the next big project to set off”. However, there is no centralised database and it is unknown how many former LNG workers are still on the project, unemployed, or employed elsewhere. As such, it will be difficult to track down individuals with the skills or experience to be employed on future projects.

The PNG LNG project brought some employment benefits to PNG, but these could have been considerably larger if there was more emphasis on training and local employment. Earlier investment in training would have benefitted more Papua New Guineans, giving them skilled employment opportunities on the project. Moreover, the PNG LNG construction phase did not last long enough to build up specialised technical skills, while the exposure of low-skilled local workers was ad hoc and intermittent. PNG nationals who worked on the LNG project were not skilled or re-skilled to give them other employment options when their contracts ended.

For employment on mega-projects to be sustainable, companies should ensure that national workers are able to find alternative employment after the project construction phase. At the very least, they should acquire skills which help them find work elsewhere. Since there is no record of the employment history of the PNG LNG workforce before and after the construction phase, the number of Papua New Guineans who have transitioned into other formal employments is unknown.

The PNG government missed the opportunity to impose stronger local employment and training targets in the PNG LNG National Content Plan. With negotiations on the Papua LNG project ongoing, it is not too late to impose stronger targets for the country’s next mega project. The PNG government should undertake a detailed survey of the project workforce to assess the skills that Papua New Guineans acquire while employed on the project, and their employability in future projects.

Given the continuing lack of quality public education and training, company training remains the only strategy to create a technically competent indigenous workforce. In this vein, one lasting benefit from the PNG LNG project  is the high-quality live gas process training facility in Port Moresby, which provides skills for the oil and gas sector. Given the low level of workforce skills in PNG, there is little risk that increased training will result in an oversupply of skills any time soon.