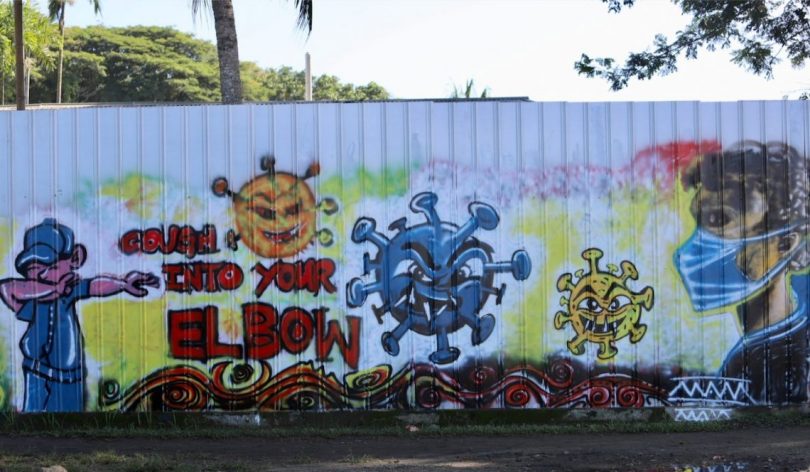 The social marketing of important preventative health messages through visual graphics can have significant negative impacts on people’s lives given their low literacy skills and their strong allegiance to religion and Christian beliefs. This article tells the story of how ordinary Papua New Guineans perceive the disease and interpret it with their own cultural and religious contexts and the various preventative health messages that have been delivered to them.

The current outbreak of the viral disease COVID-19, which started in Wuhan, China, in late 2019 sent shockwaves across the world, infecting millions of people and so far killing more than four hundred thousand globally. Misinformation, questions and misconceptions about the disease abound, leading to fear, anxiety, confusion, panic and stigmatisation. This is further exacerbated by both social and mainstream media coverage regarding the trajectory of the virus and how to mitigate it. The government’s efforts to stop movement, both domestic and international, and close down schools and universities and other statutory bodies and systems have further fuelled the public’s panic and anxiety.

Social distancing strategies such as quarantine, keeping 1–2 metres away from other people, washing hands with sanitiser, and avoiding social gatherings are completely new and unfamiliar experiences for the people of Papua New Guinea (PNG). Messages about these non-pharmaceutical interventions have been delivered in various forms, such as by radio, television, visual posters and graphics. Most people have little or no access to radio or TV news but have been exposed to visual graphics hanging in front of big supermarkets, stores, bus stops and other public places. These messages have caused not only fear and panic but have had significant implications in relation to core social and cultural values.

Family and community values such as social bonds, love, care and social support which have been strong for centuries have been replaced with suspicion, blame and rejection. For instance, a family from Simbu Province who lived in Sisiak Settlement in the Madang Province for many years decided to return to Simbu in March during the one week “grace period” before the lockdown of the Highlands Highway became effective. When they arrived in Simbu, no one was willing to take them into their house. They were seen as carriers of the virus and rejected. Their immediate families refused to welcome them home and provide food and accommodation. They felt unwelcomed and strange in their own land.

In another scenario, an East New Britain woman who tested positive to COVID-19 complained that she and her family had been stigmatised by the community, and negative media reports. Indeed, she complained of media sensationalism and threatened to sue the mainstream media companies for defamation based on human rights abuse.

These experiences demonstrate how preventative health messages about COVID-19 are received, understood and interpreted through people’s own social contexts and realities. Misconceptions about disease transmission could put people at risk and make them vulnerable. Similar experiences were seen among Papua New Guineans when the first cases of the HIV/AIDS epidemic were detected in 1987. As Dundon and Wilde recorded, most people blamed the outsiders as carriers of HIV without considering their own social and cultural factors that facilitated the viral transmission.

While public health prevention and promotion messages are important to mitigate the spread of a disease of such magnitude as COVID-19, it is also imperative to consider the potential negative implications they may have. The visual representations of the disease as cartoon-like creatures with horns popping out of their heads, sharp long teeth and flame-like tongues sticking out of their mouths are reminiscent of religious images of Satan and the Devil. While commenting on the graphic shown in the featured image, one woman in her mid-fifties said: “Ol komkom ino save lotu so Satan kam blo kilim ol i dai [The Chinese are not Christians so Satan comes to kill them].” As Aletia Dundas has written, most Christians in PNG view major disasters and disease epidemics as divine punishments for sinful behaviours.

Religious fanatics and so-called street preachers have taken advantage of the situation, preaching in towns, streets, and villages about COVID-19 as a sign of the End Times, Last Days or Second Coming of Christ – something that most Pacific Christian leaders have cautioned against as dangerous, as alluded to in Dundas’ article. Still, others, as reported by Monica Minnegal and Peter Dwyer, believe falsely that God is protecting PNG from COVID-19. While this may sound as indoctrination and is incongruent to established medical explanations, it is consistent with and in some cases confirms people’s religious beliefs and explanations. The rapid growth of religious fundamentalism in PNG poses great risks to both the current and future public health emergencies.

Health promotion and prevention messages are vital to influencing people’s behaviour on important health issues like COVID-19. However, how these messages are planned, prepared and delivered may not be culturally appropriate. The mismatch between important public health messages regarding issues such as viral transmission, social distancing and quarantining and the actual visual graphics of frightening images could prevent the transmission of the intended messages to the people. Public health social marketing products regarding very serious health issues like COVID-19 should take into account people’s sociocultural and religious beliefs and backgrounds. Preachers also need to be careful not to undermine scientific understanding.

Gabriel Kuman is a lecturer at the Divine Word University in Madang Province, Papua New Guinea, with the Department of Public Health Leadership and Training.