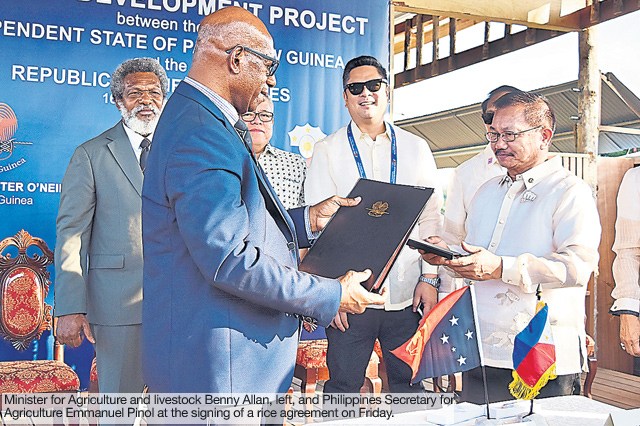 In the lead-up to last year’s APEC meeting, PNG and Filipino officials met beside rice paddies on the outskirts of Port Moresby to sign an unprecedented agreement. The recently signed five-year memorandum of agreement (MoA) calls for cooperation between the two governments in a range of agricultural sectors, including coconut, cocoa, coffee and palm oil. However, rice is key to understanding this deal. Philippines Agricultural Secretary Manny Piñol and PNG’s Agriculture and Livestock Minister Benny Allen signed the deal at a 25-hectare pilot rice farm next to Pacific Adventist University. The pilot kicked off in August last year, with help from 19 Filipino rice experts (handpicked from Piñol’s electorate), as well as supplies and equipment imported from the Philippines.

On the day of the signing, on a podium overlooking the pilot site, both Piñol and Allen spoke glowingly about the arrangement. Piñol said the productivity from the pilot had far exceeded expectations. He forecast that the next phase of the project would result in 4-5 megatonnes (4-5 million metric tonnes) of rice production in PNG within 2 years. That is an extraordinary prediction. It represents an increase of 5-600 times over PNG’s current production: PNG currently produces less than two per cent of the 400,000 tonnes of rice it consumes each year. To realise this level of production, Filipino experts will help develop a larger rice plantation in East Sepik province. PNG’s Department of Agriculture is planning to leave an initial 100,000 hectares to Filipino companies, which both governments want to increase to one million hectares in five years if successful. The small rice farm on the outskirts of PNG’s capital has become Piñol and Allen’s ‘field of dreams’.

On the PNG side, the agreement provides the promise of self-sufficiency, a key goal of the PNG Rice Policy 2015-2030. As the National Research Institute’s Ron Sofe and Francis Odhuno have outlined [PDF], for decades successive PNG governments have tried to get traditional landowners to give up land for large-scale rice production, with little to show for their efforts. The PNG government is hoping that Filipino expertise and optimism will work where others have failed. The deal also promises to turn PNG into a rice-exporter, in turn bringing in much needed foreign exchange.

While touted as an example of South-South philanthropy, the Philippines expects much out of this deal. For a start, it hopes to import rice in excess of PNG’s own needs, in turn securing its own rice supply. While the Philippines produces 93 per cent of its requirements, rice security is a long held and deeply political policy goal. Secretary Piñol has promoted the PNG deal as a way of mitigating reliance upon traditional exporters – India, Vietnam, Thailand, and increasingly Burma – who at times struggle to feed their own populations and can cease exporting rice if in their interests (as was the case during the 2007-8 food crisis). Piñol believes PNG can produce rice as cheap, if not cheaper, than these exporters.

However, the Philippines wants far more out of this deal than rice. While promoting the agreement, Piñol has also railed against PNG’s moves to increase charges for fishing vessels that access the country’s waters. He has called the proposal “unfair” for Filipino fishing companies. In addition, PNG Prime Minister Peter O’Neill wants all fish caught in PNG waters processed within the country, which threatens Philippines’ tuna processing industry.  The MoA could help smooth the way for Filipino companies that work in PNG and its waters.

Many Filipinos are sceptical about the agreement. Late last year, Trinidad Santiago, a member of the National Movement for Food Sovereignty, said “Why should we patronise the products of another country when the government could support small, local farmers – they could feed the country.” Prominent politicians have also called for more resources for Filipino, not PNG, farmers. Some economists have argued the country would be better off importing more rice from existing trading partners. This debate is heating up, as rice prices significantly increased in 2018, and parliament is debating a bill to uncap rice imports and introduce tariffs.

In PNG, however, there has been little public discussion about the implications of the agreement. This is concerning given the failure of recent agricultural schemes and the challenges associated with communal land ownership.

The Filipino private sector is set to lead implementation of rice production, with Piñol promising landowners a 20 per cent share. In PNG, such arrangements are notoriously difficult to manage. For example, PNG’s Special Agricultural Business Lease scheme (which started around 2004) promised a legal mechanism to allow landowners to lease their land to foreign companies, who would in turn develop agricultural projects. Assessments of this scheme show it has led to corruption, environmental destruction, dispossession and human rights abuses. Recently, the UN Committee on the Elimination of Racial Discrimination suggested the scheme might have infringed on indigenous peoples’ rights under the International convention on the elimination of all forms of racial discrimination [PDF].

The sheer scale of the proposed rice project – up to one million hectares, or two per cent of PNG’s land territory – means that those involved will need to negotiate with numerous landowning groups. Even with the best of intentions, keeping landowners onside is not easy – just ask any PNG-based mining company.

In turn, this agreement needs greater, and ongoing, scrutiny. While seeking to improve the food security of both countries is laudable, PNG’s poor governance and communal land tenure systems could turn Piñol and Allen’s ‘field of dreams’ into fields of nightmares.

Elena Ryan is a student at ANU’s College of Arts & Social Sciences.

Imelda Deinla is a Fellow in the School of Regulation and Global Governance (RegNet) and Director of the Philippines Project.