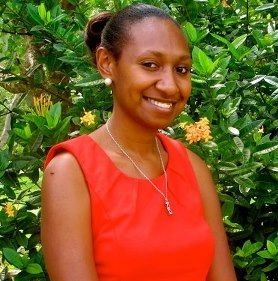 Serena Sumanop is the Executive Director of The Voice Inc, a home-grown Papua New Guinean NGO working to empower young people to contribute to their communities and to development.

Serena is also a member of the Management Committee of the PNG Family and Sexual Violence Case Management Centre (CMC).

During a recent visit to Canberra, I caught up with Serena. Here’s a summary of our conversation – you can also listen to a podcast here.

Ashlee: Could you tell us a bit about The Voice and the work that it does in PNG?

Serena: Absolutely. The Voice is a youth development organisation based in Port Moresby that has a vision to see generations of young people driven by purpose and confidence in the value of their contributions to their communities, nation and the world.

We see that vision at work through running educational programs with young people. Young people, because they really represent the future, and if they’re not invested in and nurtured, then we won’t see them realise their full potential. Especially in environments like ours in Papua New Guinea, a large number [of young people] come from homes where, because of the generation gap and cultural barriers, it’s hard for them to talk to parents or their families, or to find people that can really speak to them about the things they’re going through; sit down with them, help them set up goals and of course work towards realising the value that they have to be better citizens.

When you talk about young people, it’s vast. You’ve got different groups of young people–disadvantaged youth, people living with disabilities, HIV: where do you start? We found that we can be most effective at the moment with our capacity and resources focusing on young people that are in schools and universities, mainly because they have a vehicle to better their lives.

So right now we run leadership programs out of the University of PNG, and we recently signed a MOU with the University of Technology. That works by having a centre for leadership established with the universities–a physical space–that we invest resources in, like computers, library books, a leadership library across cultures, places where they can sit and talk.

Our leadership program runs over a period of three years. It’s an extracurricular program that gets students ready for jobs and leadership roles in their community. So that’s where we’re focused right now. And also on campaigning on other things that are affecting young people–drugs, alcohol and how to make more positive choices for their life; to engage them with positive role models.

Ashlee: You mentioned some of the challenges young people in PNG are facing around alcohol and drugs. What other issues are these young leaders identifying?

Serena: When you think about it, I think a lot of that [drugs and alcohol] just stems from ignorance and from a sense of hopelessness. Without having hope for your future, you can only squander the things that you have today, including your health. And I think it also comes back to having positive role models.

In terms of issues that I know young people are becoming increasingly passionate about, one is corruption. And I think everyone’s getting very, very frustrated with the whole issue of violence against women. It’s becoming a thing that we’re increasingly seeing both young boys and young girls take a stand and lead on.

Social media is becoming a big thing. Cyberbullying is affecting a lot of young people as well. When you don’t have a lot of avenues to express yourself, a lot of people take to that [social media]. And when there aren’t enough regulations, controls or guidelines around it, a lot of people become victims of what is actually a good thing.

It’s like an awakening happening. That awakening also needs proper nurturing, so that young people know how they can stand up on these issues. We run a program called the Clean Generation campaign. Last year we had 500 young people take part in it. It’s a campaign that’s centred around talking about issues and taking a stand to be part of a generation that speaks positively about our people, that believes that they have a purpose and that in their generation they don’t want to see the things they’re seeing. For example, as a young man, saying I would not hit my wife, or as a young person in the public or private sector, saying I will not stand for corruption.

If we can change the culture around these things and then have the systems that enforce it, we might see more change.

Ashlee: Do you think that more traditional leaders are now taking notice of this emerging youth voice?

Serena: We do have a number of senior leaders who support and recognise our work. We’ve got great champions and advocates like Sir Rabbie Namaliu, who is the patron of our organisation. We try our best to work across the generations. And we see that, though they may not fully understand what we are doing, even senior bureaucrats, public servants and others go, ‘you kids are doing a good thing’.

Ashlee: You mentioned the violence issue before. You’re now on the Management Committee of the Family and Sexual Violence Case Management Centre, which we’re also working on here [at the Development Policy Centre]. What motivated you to get involved?

Serena: I’m really excited about my role in the Case Management Centre on two levels. One, on a personal level because growing up around me, I’ve witnessed violence in my own home and in my community and in the family generally. I’ve always known that it’s been a huge, huge problem.

Even when I started The Voice, a lot of what motivated me to do it was my own personal experience and because I had people around me that believed in me and encouraged me. It gave me the freedom not to allow the negativity around me to be an excuse not to do well in life. And I thought, what if everyone actually had someone to motivate them and just say, ‘I believe in you’ and ‘You can do it! Don’t look at now, but look to the future.’ I’ve seen that has been such a positive force in the lives of our young people.

On a more professional level, I think throughout all our programs, when we sit down and we share experiences in our focus group discussions and we take the kids out for retreats, the majority, if not all, will talk about how they have witnessed a violent situation and how that’s had a huge effect and impact on their life. It steals your confidence and it instils a fear inside you. If you can’t stand up to an injustice that’s happening right in front of you, how do you talk about standing up for political issues or anything else? There’s so much fear around–how do you break that fear and break that culture of silence?

I feel very, very strongly about the issue of domestic violence. I think a lot of attention is put on women. But not enough is put on the effects that it has on their children, and especially young men, growing up in violent situations. And anything that not only seeks to advocate on the issue, but to provide and connect and coordinate services around providing the safety nets that need to be there for the women, I am absolutely behind. Practical solutions. Not only advocacy, but being able to link people back to services, has absolutely been a motivation for me to be part of the Case Management Centre.

Serena Sumanop is Executive Director of The Voice Inc and a member of the Management Committee of the PNG Family and Sexual Violence Case Management Centre. Ashlee Betteridge is a Research Officer at the Development Policy Centre.

Serena Sumanop is Executive Director of The Voice Inc and a member of the Management Committee of the PNG Family and Sexual Violence Case Management Centre.