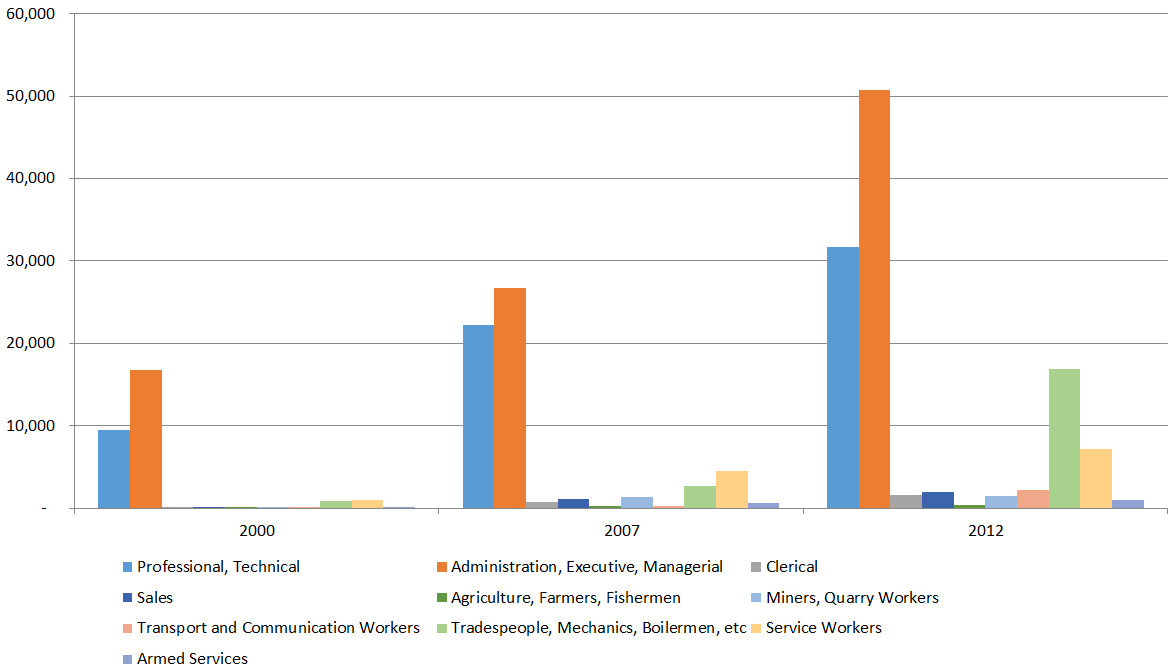 This is the fifth in a series of posts that I have written analysing arrival and departure data in Papua New Guinea. So far, we have seen that the number of arrivals to PNG has grown dramatically over the last decade, on account of the country’s economic boom. Australia has remained the predominant source country of visitors to PNG, contributing about half of all visitors, but Asia has been the fastest growing source region, with the number of visitors from the Philippines increasing particularly rapidly. The growing number of visitors from Asia come to PNG for employment purposes – a trend that is directly linked to the expanding economy. Australians continue to dominate arrivals for business and holiday purposes.

Most people who come to PNG do so to work. But what sort of work? The occupational background of visitors arriving in PNG for employment or business purposes (“working visitors”) is shown in Figure 1 for 2000, 2007 and 2012. (Please note that data are available for all years between 2000 and 2012, except for 2006.)

Figure 2 shows the percentage increase between 2000 and 2012 of all major occupational categories of working visitors arriving in PNG, as well as the total growth of working visitor arrivals over this period: 288%. 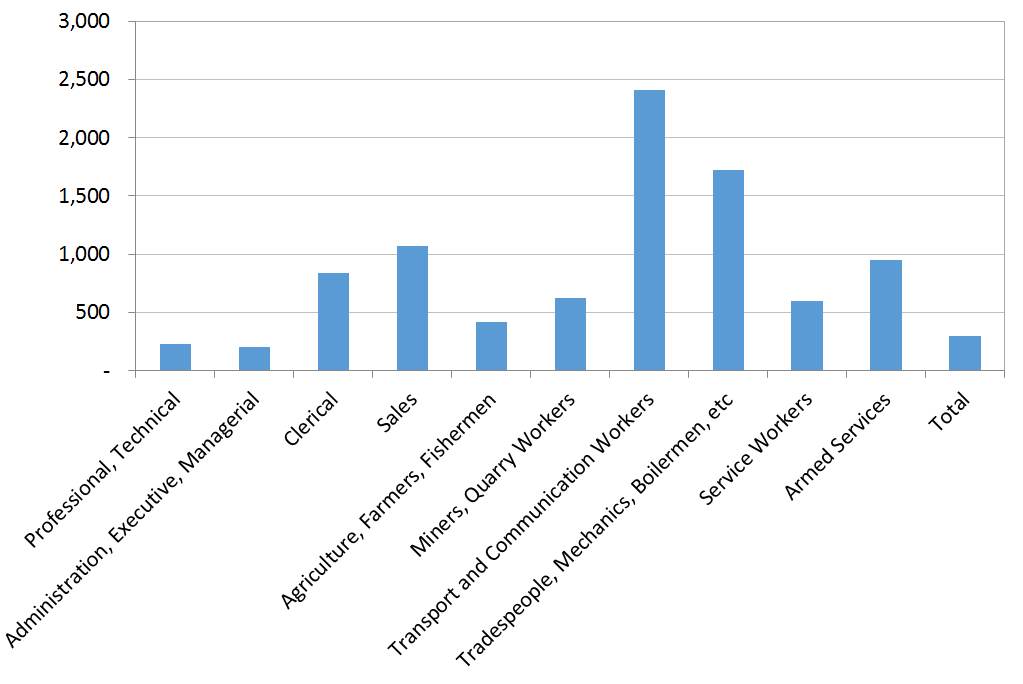 Over the entire period from 2000 to 2012, visitors in the category of “administration, executive, managerial” were the largest occupational category, followed by “professional, technical”. These are also the two most highly skilled occupational categories. They grew at a similar rate between 2000 and 2012 of 203% and 233% respectively. This indicates an ongoing shortage of highly skilled labour in PNG. However, their combined share of working visitors is declining: from 88% in 2000 to 80% in 2007 and 71% in 2012.

Taking up a rapidly increasing share of working visitors is the visitor arrivals category of  “tradespeople, mechanics, boilermen, etc”. (Tradespeople are referred to as tradesmen in the data released by the NSO.) This category, which became the third largest by 2012, accounted for 16,848 working visitors in 2012 or 15%, up from only 925 or 3% in 2000: a growth rate of 1,721%! This remarkable increase points to an increasing shortage of trades labour, associated with PNG’s expanding economy and especially its booming construction and mining sectors.

The fourth largest category in 2012 were “service workers”, which includes workers related to customer interaction, entertainment, sales or other service-oriented work: this category grew by 598%.

The category of “transport and communication workers” grew most rapidly between 2000 and 2012 (2,410%), albeit from a low base, making it the fifth largest category in 2012. The even more remarkable growth in this category is probably linked to increasing deregulation in the telecommunications industry in PNG.

In sum, PNG’s growing economy has attracted an increasing number of both highly skilled and vocational and technical workers. The composition of the foreign workforce has changed significantly over the last decade. In 2000, nine out of ten visitors who came to PNG to work had a professional or managerial background. Now, it is only seven out of ten. The sharp rise in the share of blue collar workers – from 3% to 15% of working visitor arrivals between 2000 and 2012 – among the expatriate workforce is linked to recent patterns of economic development in the country and reflects the growth of both extractive industries and the construction sector.

This analysis excludes the non-working categories of “Homemakers, parents”, “Students, children”, “Retired, pensioners” as well as the category “Not stated” because there were, as expected, very few persons entering PNG for work belonging to each of these groups.