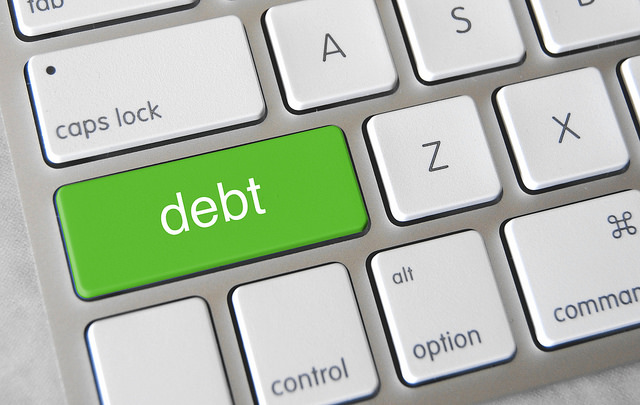 The PNG Government released its Mid-Year Economic and Fiscal Outlook (MYEFO) on Monday – the update on the 2015 budget. The estimated budget deficit for 2015 blows out from an already high budgeted 4.4% of GDP to 9.4%. This would be the highest in PNG’s history. Public debt levels are expected to skyrocket from the earlier estimate of 27.8% of GDP to 41.3%. In Australia, such a rapid change in the estimated fiscal position would go well beyond being termed “a budget crisis”. PNG’s official figures are much worse than at the time of PNG’s last economic crisis at the end of the 1990s (see graph below). 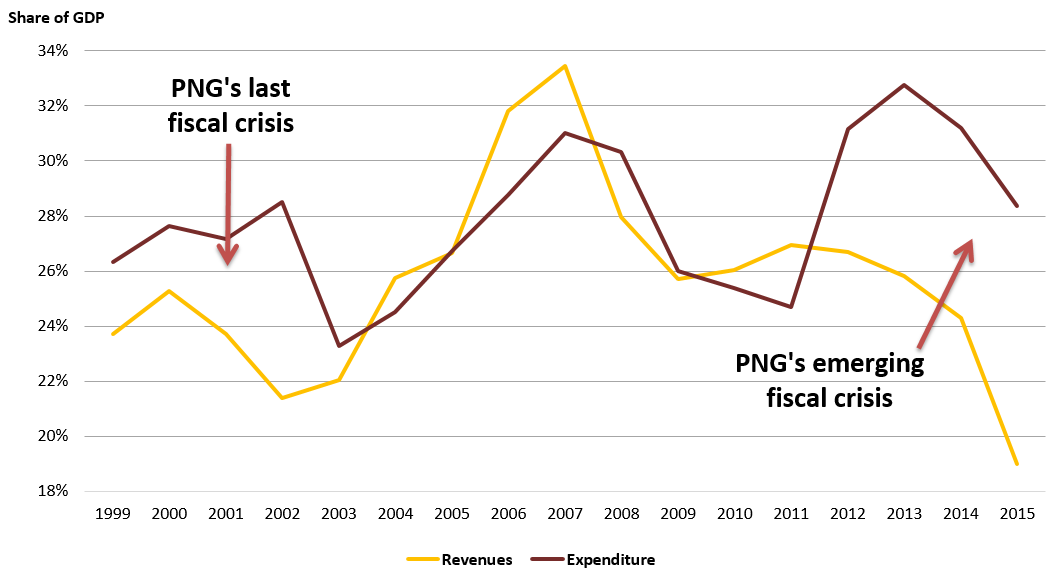 Note: The gap between the lines indicates the size of the government deficit or surplus. Both lines exclude grants (aid).

The drivers for the rapid deterioration in PNG’s fiscal situation are the fall in international commodity prices, a growth slow down as well as sales of public assets not proceeding. My December blog estimated that the fall in international oil prices would lead to a reduction of K1.4 billion in resource revenues in 2015 relative to budget estimates. The official estimate is now a fall of K1.6 billion – including additional revenue falls from lower gold and copper prices and production difficulties at some mines – such as the closure of the Ok Tedi mine due to growing drought conditions.

But what is really surprising is the fall in non-resource revenues. There are also now major falls predicted relative to budget in GST revenues (K400 million), personal income tax (K125 million), company tax (K124 million) and excise (K66 million): all of these are now estimated at 2014 levels or below. The new estimates are based on first half performance, and reflect the real slow down in the economy or what the report calls “weaker than anticipated economic activity”. For example, imports in the December quarter 2014 were the lowest quarterly level since 2006.

Altogether, revenues in 2015 are estimated to fall by K2,546 million compared to the budget estimates, or 20.7% of the government’s own revenue base (excluding grants). To put this in perspective, the collapse in iron ore and other commodity prices for Australia reduced 2015 revenues by AUD5.9 billion between the December MYEFO and the May 2015 budget – or only 1.5% of revenues. The 2015 revenue estimate is now below its 2014 level, and that’s before inflation.

At this stage, and this is the critical policy issue for the MYEFO, no cuts in expenditure are detailed. To his credit, Finance Minister James Marape did issue a statement on Tuesday in response to the MYEFO on the need to curtail and defer expenditure, but much more is needed.

There was talk earlier of a supplementary budget to reduce expenditures given the absence of a great PNG LNG tax bonus for at least several years, but there is no mention of this in the MYEFO. Needed adjustments should have started in the first quarter of 2015. There have been widespread reports of expenditure restrictions being implemented, and cuts being announced to departments. But whether these go far enough is unclear (earlier reports suggested a revenue shortfall of K1.3 billion not K2.5 billion). Moreover, the silent path – simply not issuing warrants to agencies thereby preventing them from spending appropriated funds – is not transparent, makes effective expenditure planning extremely difficult, and does nothing to rebuild confidence in the economy. It also just delays the near inevitable political pain as the 2016 budget is due in only three months.

Making the required cuts will be extremely challenging. My June presentation “Pathways from crisis” provides an example of how PNG could move away from a fiscal crisis. This was based on the earlier estimated revenue shortfalls of K1.3 billion this year – not K2.5 billion. Even then, real cuts were required of over 10% in a 2015 supplementary budget, a further 10% in the 2016 budget, and then no real expenditure growth for the next several years. With the 2017 election looming, tough political choices need to be made now and in the 2016 budget.

Financing a deficit of 9% of GDP will be next to impossible. PNG primarily relies on domestic financing but this has become much more difficult. PNG may need to look offshore for significant foreign borrowing. This will have risks – especially a foreign exchange rate risk if PNG’s Kina depreciates to more sensible market-based levels. Public debt interest costs have already doubled under the current Government from under K500m to over K1,000m in 2015. The “Pathways from crisis” analysis noted above had potential interest costs balloon out to K2,300m per annum by 2019 – 15% of all expenditure. A more desirable alternative could be public asset sales over the coming years done in ways to protect consumers (so not simply selling government monopolies). The MYEFO indicates the planned K2.5 billion in sales of PNG LNG assets to local landowners in 2015 has been put off – and if it does occur in 2016 as initially expected, it is more likely to be at a level of K600m estimated in the 2014 budget.

A large government deficit (even if less than 9%) will have various negative consequences. First, it will keep PNG’s overall balance of payments in deficit and international reserves will continue to fall. Second, the requirement for domestic financing could squeeze out financing for the private sector which is vital for long-term growth. Third, and possibly of greatest consequence, it will hurt confidence in the PNG economy. Moody’s international ratings agency has already placed PNG on a negative outlook, in part due to fiscal concerns.

Overall, this is a frightening document. As noted by Stephen Howes back in February, “In sum, this year will either be a year for tough decisions in PNG, or it will be a year of descent towards crisis. A recovery of oil prices is an unlikely way out. Politics will tell which way the country turns.”

Let us hope for a major announcement shortly on a way back towards fiscal sustainability, not just a new budget for this year, but a new medium-term fiscal strategy. The adjustment path will be painful – but necessary.