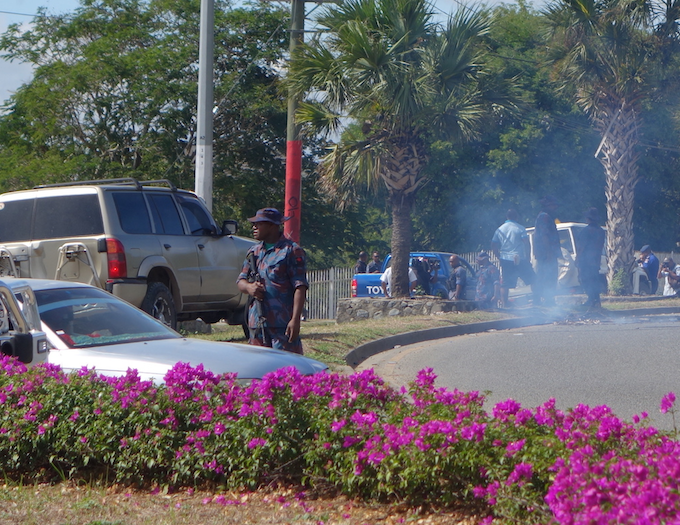 Police at the University of Papua New Guinea during the June 2016 student protests (asiapacificreport.nz/Citizen Journalist)

The use of force by police and police brutality continue to be a concern to the people of Papua New Guinea (PNG). Police brutality is only perpetrated by a minority of ill-disciplined rogue police officers and does not reflect the mindset of the Royal PNG Constabulary (RPNGC) in its entirety, but it certainly gives the constabulary a bad reputation. It creates distrust of the police by citizens and reflects badly on the PNG government.

This blog gives two examples, one from just last month and one from 2016, to illustrate the fact that police brutality often stems from political influence in policing.

On 18 April 2021, a few police officers attached to the Fox Unit in Port Moresby allegedly forcefully entered Mr Aigilo’s residence at night and assaulted him, and later kidnapped and threatened to kill him before detaining him at the Boroko Police Station. As Mr Aigilo has indicated, this was done without any prior formal complaint lodged against him, and without an arrest or search warrant. He was released the next day after instructions were issued by PNG Police Commissioner David Manning.

A practising lawyer, Mr Aigilo alleges that the police attack raises the question of whether or not police acted impartially or in support of Enga Governor Sir Peter Ipatas against him. This is because Mr Aigilo’s alleged assault and detainment came a day after he formally lodged a complaint with the PNG Ombudsman Commission against Sir Peter over allegations relating to financial mismanagement of the Porgera mine landowners’ royalty payments totalling up to K1.6 billion over a 30-year period.

According to Mr Aigilo, the police involvement in his alleged assault and arrests was politically motivated. Mr Aigilo also alleges that police use of force is an abuse of power and authority because he was unarmed and so there was no need for the use of force by police. He states that his human rights and those of his family were violated.

The case has been registered with the police and will be decided by the courts. While we must await the court’s ruling, the alleged incident certainly brings into question the integrity and independence of the police force.

In 2016, students at the University of Papua New Guinea (UPNG) led nationwide protests against Prime Minister Peter O’Neill. Their grievances were many but centred on accountability and the lack of execution of a long-standing corruption charge and arrest warrant against the prime minister.

To quell the protest, armoured police officers went to UPNG and opened fire on unarmed university protestors, injuring several students. The action was viewed by the public as politically motivated in order to protect politicians.

The two cases discussed above demonstrate just some of the reasons that many people believe that police allegiance to politicians contributes to police brutality and the abuse of human rights while in the process protecting political interests. This compromises the constitutional role of police, which is to protect the country’s citizens and their property, and to be impartial between political groupings. Extrajudicial acts by even a few members of the police force undermines citizens’ trust in the state, and leads to significant financial costs to the state in terms of civil litigation.

In order to address issues of police-related violence and brutality linked to political interests, it is crucial for police officers to be educated about their constitutional roles, and the need to adhere to the police Code of Ethics and the Police Act. As is now happening in this most recent case, appropriate disciplinary action needs to be taken against officers who either violate their constitutional roles or take sides when it comes to political interests. Most importantly, politicians need to stop interacting with the police, and stop using them for political reasons. Perhaps then, trust in, and the credibility of, the RPNGC could be restored.

Okole Midelit is a teaching fellow in political science in the School of Humanities and Social Sciences at the University of Papua New Guinea.