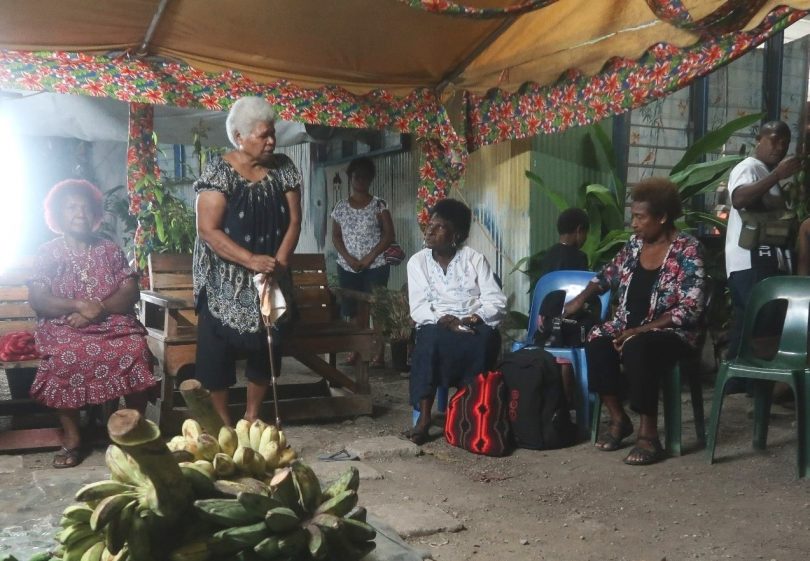 Papua New Guinea’s national elections are coming up in 2022, and the national women’s political empowerment movement is gaining momentum again. PNG women leaders will drive the direction and pace of these debates.

This article is part of a series of visual and written reflections, titled Nahau’s haus krai, prepared by a co-author of this blog, Michelle, who is one of Nahau Rooney’s children and a member of her large extended family. The Nahau’s haus krai series aims to contribute to our understanding of PNG’s political history, and women’s social, cultural and political engagement.

Haus krai, in the contemporary PNG context, refers to the attendance to the social and cultural obligation of burying loved ones. Haus krai is more than just paying respects to the deceased, attending a funeral, or burying the deceased; it is the expression of the collective love and obligation to bury someone.

Nahau’s haus krai was a highly gendered affair. Everyone grieved. Men dominated the public decision-making process, but women also claimed their space in this process. Men and women were involved in different ways in the logistics of managing the haus krai contributions: cooking, cleaning, preparations, planning, keeping records, decision-making, keeping vigil near her casket, and the burial.

In Manus, proceedings included a hand-over ceremony by the provincial government, led by the Manus MPs Charlie Benjamin and Job Pomat. Separate events were led by the executives of Pihi Manus Women’s Association for Manus women to pay their respects.

The tributes and customary exchanges provide insights into women’s political leadership in PNG and Manus.

A video shows parts of a speech made by the Prime Minister (PM) of PNG, Hon. James Marape, on 7 October 2020 at the haus krai venue in Port Moresby. He noted that he was speaking as the PM, as the leader of the Pangu party, as the elected Member for Tari electorate, as a son of the nation acknowledging a founding mother of the country, and as a member of his own family.

The PM’s presence at the haus krai highlights the interwovenness of PNG’s political history and its women’s political representation movement. The late Nahau Rooney’s political career is embedded in the history of the Pangu party, and in particular the late Sir Michael Somare’s political legacy. Somare was an unapologetic supporter of strong PNG women’s leadership.

Rooney first contested and won an open electorate seat in the 1977 elections when she was recognised as being closely affiliated with the Pangu party. In 1979, her role in the controversial ‘Rooney affair’ saw her sentenced to jail, Somare lose his leadership, the resignation of the panel of foreign judges, and the subsequent indigenisation of the PNG judiciary.

Despite these controversies, she was supported by Somare and Pangu in the 1982 national elections. She was declared Member of Parliament for the open seat of Manus by the court of disputed returns, and was part of Pangu’s return to power. In 1985, Rooney co-founded the People’s Democratic Movement (PDM) party with Paias Wingti, Tom Awesa and others. PDM ousted the Somare-led Pangu government through a vote of no confidence. In 1987 she contested the elections as a PDM candidate and lost. In the 1997 national elections she contested as an independent candidate and lost.

The video of Nahau’s haus krai shows a response to the PM by Dorothy Tekwie, founder of PNG Women In Politics, President of the West Sepik Provincial Council of Women, and former leader of the PNG Greens Party (and co-author of this blog). She was part of a contingent from PNG Women In Politics, which included Maria Hayes and others who also paid their tribute.

Tekwie noted Pangu’s support for her own political journey. From the perspective of Papua New Guinean women, she pointed out that Marape’s attendance at the haus krai was important because of the difficulties ol politik meri (political women/women engaged in the political arena) face in accessing members of parliament to advocate on these issues. She said:

Prime Minister, we want to see changes… We are so honoured tonight to see you here. And to share with us this, with the family, but also to share with the women of Papua New Guinea. You meet us here because you wouldn’t meet us. We never get through the gates of parliament because [they see us and say] oh em ol politik meri ya larim ol stap lo baksait [oh these are political women, let them remain at the back].

Tekwie challenged political party leaders to identify and support strong women leaders to contest elections. She ended her speech with a symbolic customary gesture in which she crawled on her knees towards the Prime Minister, the Chief of the Nation of PNG. She explains that:

This crawling gesture in parts of Sepik area signifies the respect we have for chiefs. In traditional Sepik society, a woman would not walk up to the chief. When delivering food, she will crawl and push the food towards the chief, or a man may take and deliver the food. When walking past a chief, she will gather her grass skirt against her body and walk away. During Mrs Rooney’s haus krai, I crawled to show respect for the chiefs, like Late Grand Chief Somare who is from Sepik, and other PNG leaders, like Prime Minister Marape and Governor for NCD Powes Parkop who attended her haus krai. Mrs Rooney is also a Pilapan, or Woman Chief, in Manus society in her own right. When the leaders and chiefs come to her house, she would have thrown a feast, but in her absence, I did that to accord them the chiefly respect.

Dorothy Tekwie’s speech and customary gesture demonstrate how PNG women operate in diverse social, cultural and political spheres of life to advocate for women’s political representation. Political histories, haus krai and other events can create opportunities to draw on cultural and social knowledge to legitimise and authorise politik meri to advocate for women’s political representation.

Dorothy Tekwie is President of the West Sepik Provincial Council of Women. She founded PNG Women In Politics and is the former leader of the PNG Greens Party.