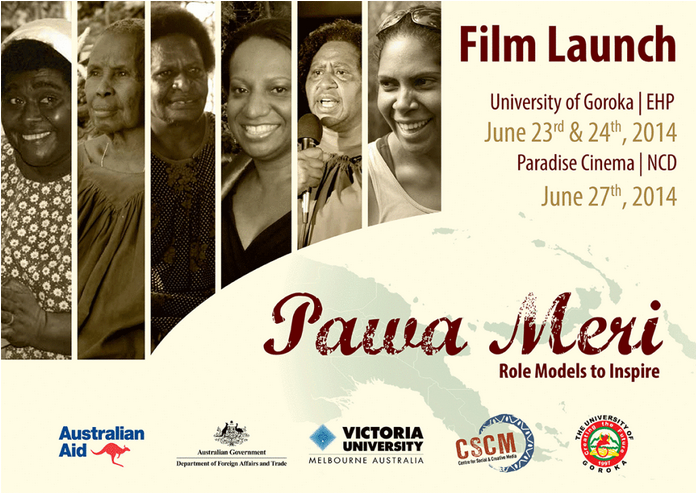 The combination of the words ‘women’ and ‘power’ in the context of Papua New Guinea usually evokes a disheartening image. Both international and domestic [pdf] analysis tells us that women in PNG are faced with a range of obstacles to the realisation of their rights and ambitions, including high rates of gender-based violence. In parts of the country these obstacles constrain their choices from birth, define the nature of their lives and sometimes even lead to their deaths.

Last month at the University of Goroka in the Eastern Highlands Province, the usual equation was turned on its head with the launch of a very different representation of women and power in PNG. Pawa Meri (Powerful Women) is a series of six documentary films produced by local filmmakers–all women–in a collaborative project between the Centre for Social and Creative Media at UoG and Victoria University in Melbourne, with funding from the Australian Department of Foreign Affairs and Trade. The project has been led by Dr Ceridwen Spark of Victoria University, and ANU Research Fellow; herself born and raised in PNG.

The short documentaries each tell the story of six powerful women–strong female role models–and together they show the diversity of women in PNG in terms of place of birth and daily life, education and profession, and contribution to society. The aim of the films is to challenge existing gender stereotypes and inspire young women to become leaders themselves. The project also had important capacity building goals, offering emerging directors the chance to be mentored by professionals in film making and production. It is expected that they will pass these skills onto others.

In determining the subjects of the documentaries, Dr Spark was careful to ensure that a balanced representation of women in PNG was given, in terms of their expertise, age, professional status and where they were from. As such, the films take us from Manus in the north, Bougainville in the east, Markham and Goroka in the centre of the country, west to Daru and south to Port Moresby (see map here). The subjects of the documentaries are village magistrate Miriam Potopi from Manus; Sister Lorraine Garasu from Bougainville; emerging community leader Jenifer Baing Waiko from Markham; restaurant owner Rita Kare from Goroka; community worker Gina Baidam from Serimambu village near Daru; and Port Moresby-based professional, Susil Nelson.

For Australian viewers, the Manus documentary, titled Lapan, may provide particularly unique insights; our recent knowledge of the province having been dominated by the Manus Island detention centre. Miriam is one of PNG’s first female village magistrates. The film provides an understanding of the village court system unique to PNG and the role Miriam plays as a leader in her community and beyond. In a statement about the film, the director, Renagi Taukarai, said:

Miriam’s story was initially about her role as the first Papua New Guinean woman in the country’s village court system. It soon became apparent that hers was a bigger story than that: it was a story about life. Her philosophies and traditional wisdom made sense … Her wit and enthusiasm was contagious. Her hospitality knew no limits; her faith – no boundaries. Her simplistic views on emotional matters spoke of courage. And her leadership was without question. Where man is Lapan (chief), she became Lapan.

It is not just the stories of the pawa meris that offer inspirational lessons about the strength and ability of women in PNG, but those of the female film makers themselves and the women with whom the subjects of the documentaries work. In a recent interview on Radio Australia, director Ruth Ketau reflected on the distances that pregnant women in remote parts of the country need to travel in order to reach maternal health services. Ruth is a mother herself and a film editor with the National Film Institute. She trained as a film maker and, in addition to her contribution to Pawa Meri, she has recently directed a documentary on Julie Soso–yet another strong female role model–the Governor of Eastern Highlands Province, and one of three women elected to PNG’s Parliament in the 2012 elections.

As we at Devpolicy know through our association with the PNG Family and Sexual Violence Case Management Centre, PNG is home to many dedicated and resilient women who advocate for women’s rights and work to protect them from discrimination and violence. Sadly, the overwhelming demand placed on support services for survivors of family and sexual violence also tells us how truly inimitable such women are; and how determined they need to be to press forward with their work. Importantly, the Pawa Meri series highlights just what PNG women can do. It also motivates viewers to imagine what more they could do with greater recognition of their rights and more support for their endeavours.

The Pawa Meri series is due to be released throughout the Pacific, including via the Australia Network. Copies are now available on DVD from the University of Goroka (request via email to Modesta). A preview of the series can be viewed via YouTube. For more on emerging female leadership in the Pacific Islands and the challenging of gender stereotyping in PI communities, see Ceridwen Spark’s recent article for the Development Leadership Program on the women’s magazine Stella.