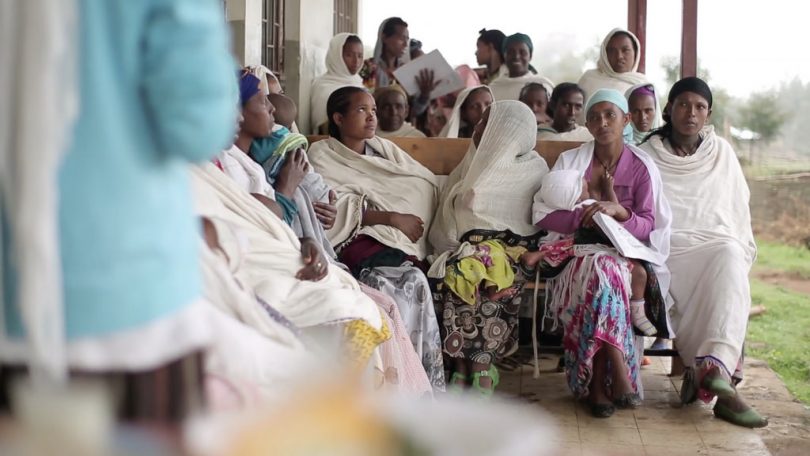 Waiting to be seen by a Health Extension Worker in Amhara region, Ethiopia (UNICEF Ethiopia/Flickr/CC BY-NC-ND 2.0)

‘Too Far to Walk: Maternal Mortality in Context’ is probably the most quoted paper describing factors that contribute to maternal mortality in developing countries. Since the paper was published numerous maternal and reproductive health programs have been funded by various UN agencies, NGOs and other organisations to improve maternal health and reduce maternal mortality—mostly by changing the location of birth: from home delivery where birth takes place without the assistance of trained health providers, to facility-based delivery and the medicalisation of maternity care. Millennium Development Goal 5 (Target 5A aimed to reduce the maternal mortality ratio by three quarters, between 1990 and 2015) was achieved in some countries like Bhutan, Cambodia and Rwanda but not others such as Nigeria, India and Ethiopia. The Sustainable Development Goals (SDGs) also have a target to reduce the global maternal mortality ratio and one SDG priority aims to provide universal health coverage and access to quality essential health-care services.

The three delays model focuses on the main factors that affect the outcomes of emergencies during pregnancy and childbirth. It is a medical model of maternal survival based on the understanding that most direct maternal deaths (i.e. haemorrhage, obstructed labour, postpartum sepsis, pre-eclampsia or eclampsia, and ruptured uterus) are preventable with prompt medical intervention. Delays are a prominent factor in maternal death: delays in deciding to seek care (influenced by cultural and socio-economic factors such as household decision making, cost, distance, and perceived quality of care at the health facility); delays in reaching appropriate medical facilities (accessibility and options for transport including time and cost); and delays in receiving quality care at the medical facility (quality of care, adequacy of the referral system and shortages of supplies and equipment).

I could relate countless stories of how people I’ve met in rural Ethiopia delay going to health facilities just hoping they will get better. Like the father of the malnourished child with ulceration to the bone on his foot who was brought to the health centre too late. Or the many stories I heard from women who live in remote neighbourhoods (kebeles) who know of other women who have died or lost a baby on the way to a health facility—most likely because they delayed at home.

During a recent stay in Ethiopia the consequences of three people delaying going to health facilities for medical treatment stand out. In the first, one of the midwives who worked at the health centre where I was based went home to visit her family a few hours away for the Ethiopian Orthodox Christmas in early January. The midwife (I’ll call her Tsige) was more than 30 weeks pregnant and knew her baby was breech. A few days later, when I was working with the (now former) Medical Director calculating the formulas for all the health services for the next five years, Tsige called to ask his advice as she had developed eclampsia (high blood pressure and high levels of protein in her urine). The Medical Director advised Tsige to go to the hospital immediately. Four days later I was in the same town as the hospital when I met Tsige and her father by chance outside the post office. They had just left the hospital but were heading home as Tsige had not brought her bag with things for the baby with her. Given the seriousness of her condition, the zonal hospital had referred her to the tertiary (specialist) hospital over 100kms away. I suggested she should go immediately and not return home but she insisted that she needed to collect her bag. Twice during the following week, I enquired about her condition and was told she had not yet gone to the hospital. Finally, about a week later I heard she had given birth by caesarean section and that both mother and baby were OK.

In another example, a formerly fit and healthy young man from a distant rural kebele was carried to the health centre on a stretcher. He had been bitten by a dog at least two weeks earlier. The dog—which clearly had rabies—had bitten four or five members of the same family. As the only health facility with a regular supply of rabies vaccine (the hospital sometimes ran out and it was a week-long process to drive to Addis Ababa, visit various premises to purchase the vaccine, and then maintain the cold chain while travelling back to the health centre), patients often came from outside the catchment area for rabies treatment. If someone is bitten by a dog (or monkey) with rabies, they must come within 24 hours or so to start treatment. But by the time the young man was brought to the health centre it was too late and he was sent home, where he died the following day. We later heard that other family members died as well.

On another occasion while travelling to a meeting in a nearby town we were flagged down by two Health Extension Workers at a roadside health post. A large crowd surrounded a woman lying on a homemade stretcher on the ground. She had been carried from a rural area and was haemorrhaging following a backyard abortion. With another patient and his friend already on the back seat of the four-wheel drive, we quickly put the woman on her stretcher in the back and took her to the hospital 20 minutes away. There is no doubt she would have died if we had not been passing by as there was no functioning phone network to call the ambulance that day.

While the three-delays model was developed for reducing maternal mortality, it can clearly be adapted to other emergency services that need timely action, especially when there are barriers posed by transport, distance to care, and the perception of the quality of the services. Even in low-resource settings, “community-based first responders can reduce mortality and morbidity substantially” by developing a system that provides basic emergency care at the community level. Education on how to recognise emergencies and “access the appropriate level of care can be particularly effective but relatively inexpensive…training of community members to assist with emergency identification and the transport of patients to appropriate care has been shown to significantly decrease mortality”.

Doing research in Ethiopia over many years I have learnt about patience and persistence, flexibility and resourcefulness, ambiguity and resilience. I have spent many hours—even entire days—in government offices waiting to have documents authenticated, to obtain ethics approval, to conduct interviews or to give presentations. I have walked for hours, even days, to interview women in rural kebeles, and to visit rural health posts and health centres. Learning how to ‘go with the flow’ has become an enjoyable part of doing research, as it often means drinking good coffee at roadside stalls, meeting interesting people along the way, and learning things one would otherwise never learn. But ‘going with the flow,’ will not save lives during an emergency.

In my research I’ve argued that the ‘theme’ of distance suggests it is taken for granted that the lives of people living in rural communities is to a large extent slowed to a walking pace as that is the only way to travel both short and long distances. For the women I meet, walking links their activities between home, the field, water and firewood collection, visiting neighbours, going to church, and going to the market. But walking to the market, for example, is also a way to create social networks for women as it gives them time to gossip and catch up with friends and neighbours before the long walk home (Jackson, in press).

We didn’t ask how long it had taken to make the decision to carry the woman who was haemorrhaging to the health post. Nor did we ask how long it took to carry her there. Is it enough to educate people to recognise emergencies if they live many hours walk from a functioning health facility? If so, this might be a fundamental solution to dealing with the ‘three delays’ issue. Yet Tsige, a trained midwife, did not appear to recognise how close she and her baby were to needing emergency obstetric care. The young man with rabies would be alive today if he had come to the health centre the same day or even early the next day to receive rabies treatment.

Health emergencies are unpredictable, and there are few quick fixes, but “strong emergency systems can prevent delays at critical time points”. Perhaps the introduction of health services aimed at saving lives in rural and remote parts of countries like Ethiopia should be a mix of both slow and steady change as health facilities are constructed and issues of access and quality of service are addressed. At the same time, training should teach community health providers (such as Health Extension Workers in Ethiopia) how to provide decisive and reactive action when required. And that means educating people in rural communities not to delay going to health facilities many hours walk away if there are health emergencies.

Jackson, R. (in press) ‘On walking alone and walking with others: Framing research activities by time and distance in Kafa Zone, Ethiopia’, in R. Jackson and M. Kelly (eds), Women Researching in Africa: The impact of gender, (London: Palgrave Macmillan Publishing).