Australia, readers of The Australian have learned, is well and truly ‘pulling its weight on refugees’. Australia is said to be the most generous receiver of refugees in the world. What authority is cited? Why, the Refugee Council of Australia. The newspaper has simply taken the Refugee Council’s statistics on refugee resettlement in 2014, which were released at the end of July, and helpfully displayed them thus: 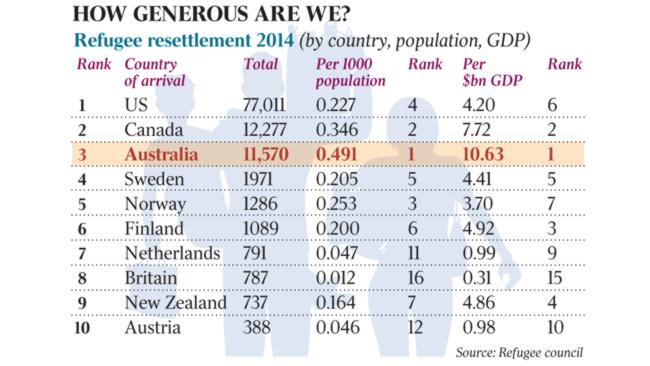 As you can see, right there in red, Australia ranked first in the world as a refugee resettler in 2014, whether measured in terms of refugees resettled per head of recipient country population, or in comparison with recipient country GDP.

Impressive? No. Breathtakingly selective and disingenuous reporting? That’s more like it.

In releasing the 2014 numbers, the Refugee Council stated very clearly that, ‘the fairest comparison is to look at how the refugee recognition and resettlement within Australia’s total Refugee and Humanitarian Program compares on a global basis’ (emphasis added). The ‘recognition’ part makes all the difference. In the overwhelming majority of cases—97 per cent in 2014—refugees acquire that status by arriving somewhere as an asylum seeker and subsequently being recognized domestically as a refugee. The statistics quoted by The Australian relate only to the comparatively miniscule number of cases—just over 100,000 out of 3.4 million in 2014—in which refugees are recognized offshore and then resettled in developed countries.

The Refugee Council itself decidedly does not make a point of saying Australia ranks first or even highly on any meaningful measure of generosity as a refugee-receiving nation. In fact, in drawing what it considers the fairest comparison, as outlined above, it says:

By this measure [recognition plus resettlement], the 14,350 refugees recognised or resettled in Australia during 2014 made up 0.43% of the global total, with Australia ranked 22nd overall, 27th on a per capita basis [actually 28th] and 46th relative to total national GDP. The 2014 statistics are similar to those of the previous decade. In the 10 years to 31 December 2014, the 141,047 refugees recognised or resettled by Australia accounted 1.16% of the global total of 12,107,623 – with Australia ranked 23rd overall, 27th per capita and 46th relative to national GDP.

So which countries were in fact the most generous refugee-receiving nations on a per capita basis in 2014? On the basis of the statistics released by the Refugee Council, which in turn were got from the UN Refugee Agency (UNHCR), the top seven in the generosity rankings were of course developing countries including, coincidentally, Australia’s diminutive neighbour Nauru. Sweden and Malta are the only developed countries that figure in the top 10. 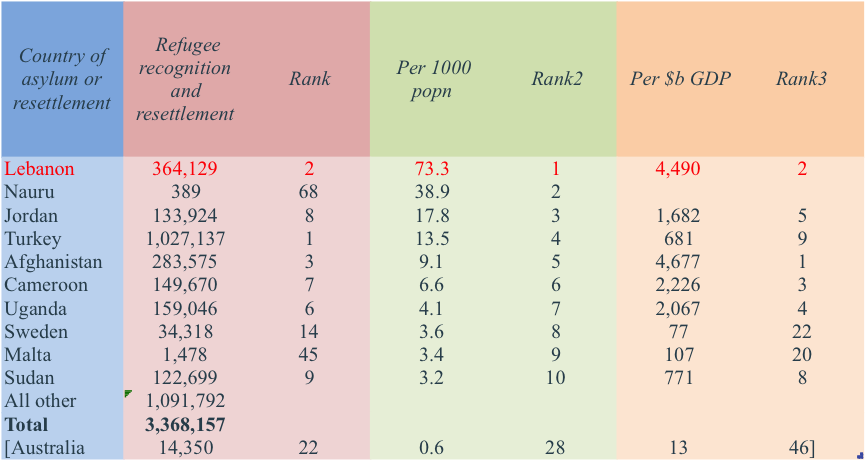 If, for any reason, you are interested in comparisons only between Australia and other developed countries for 2014, the situation is as shown below. 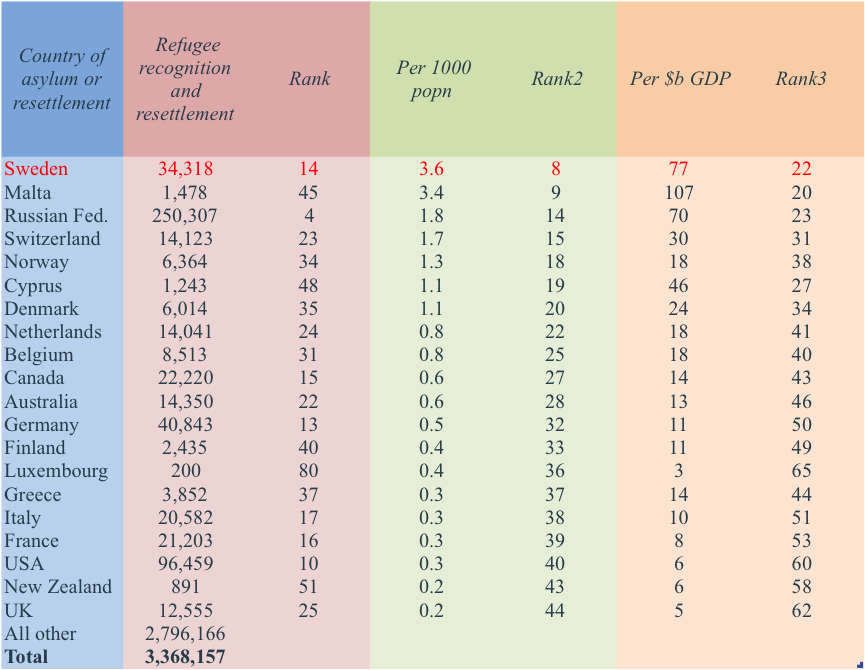 Australia is with Canada in the middle of the developed-country pack. Those toward the top of the pack, even if we leave aside the exceptional cases of Sweden and Malta, are settling two to three times as many refugees per head of population as Australia and Canada.

Somebody at The Australian had to burn a few calories in undertaking the statistical manipulation described above, which involved constructing a new and meaningless country ranking based only on refugees resettled and ignoring asylum seekers recognized as refugees. Let it not be thought that the Refugee Council of Australia, let alone UNHCR, actually did this themselves.