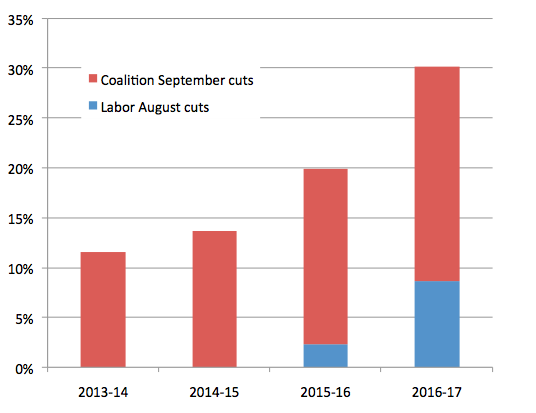 The Coalition’s aid cuts announced last week come on top of Labor’s August cuts. Together, they are very substantial, as the graph below shows. They are 12% of this year’s aid program. For the coming years, we can compare them to aid from the forward estimates in the 2013-14 budget. Using that measure, the cuts are 14% of next year’s program, 20% of the 2015-16 program, and 30% of the 2016-17 program.

Although the cuts increase over time, achieving them will actually be hardest in the short term. Implementing the 12% reduction in aid this year will be particularly problematic. Many aid items are difficult to cut quickly. Contracts need to be honoured. Staffing costs and scholarship payments can hardly be reduced in a hurry. On top of that, some country programs will probably be protected from cuts. PNG, Indonesia and Nauru are all vital to the Government’s “stop the boats” strategy.

A conservative estimate of these difficult-to-cut and quarantined amounts is about $2.1 billion (see my calculations at the bottom of the post). Take them out, and the 12% cuts for this year amount to 18% of the remaining “discretionary” aid program.

Emergency programming is always vulnerable to cuts, and a potential savings, but in Syria we are facing the biggest humanitarian crisis the world has faced this century, according to the UN.

Cuts to aid themselves are nothing new. Howard cut deeply—9.4% after inflation—when he was elected (in March 1996). But he did it through the normal budget process. Labor’s $375 million grab for asylum seekers in December last year was the first time the aid program had come under attack within a financial year. Even allowing for the fact that the Coalition’s $656 million cut for the current year comes earlier in the financial year, it is so much larger that it will cause much more chaos. Delays in decision making, postponements in payments, and renegotiation of agreements will be the order of the day, and the price will be paid in terms of aid effectiveness, as Robin Davies argued in his post last week.

Why are we cutting $656 million this year? It is not easy to answer that question. It’s not even clear if the Coalition has an answer. Tony Abbott said last week: “We’re not cutting foreign aid, we’re simply reducing the rate of growth.” But that’s simply not true. In the medium term, the Coalition’s stated aim is to grow the aid budget in line with inflation, but,  as Davies points out,  it is from last year’s base rather than this year’s.  For this year, with the cuts, aid will actually be below last year’s level, even before inflation.

For a government that wants to be purposeful, steadfast and methodical, as Tony Abbott put it in his acceptance speech, it is a strangely chaotic way to start its management of the aid program.

Note re quarantined and difficult-to-cut amounts: I assume that the Indonesia ($647 m.), PNG ($507 m.) and Nauru ($29 m.) aid programs will be protected from cuts for strategic reasons. I assume that half of scholarships ($200 m.) and 80% of running (departmental) costs ($300 m.) are committed and can’t be cut. I also assume that the $375 million for domestic processing of asylum seekers can’t be touched. These amounts total to $2.1 billion.

Note re aid numbers: For the calculations behind the aid numbers in this post, see the table at the bottom of this post.