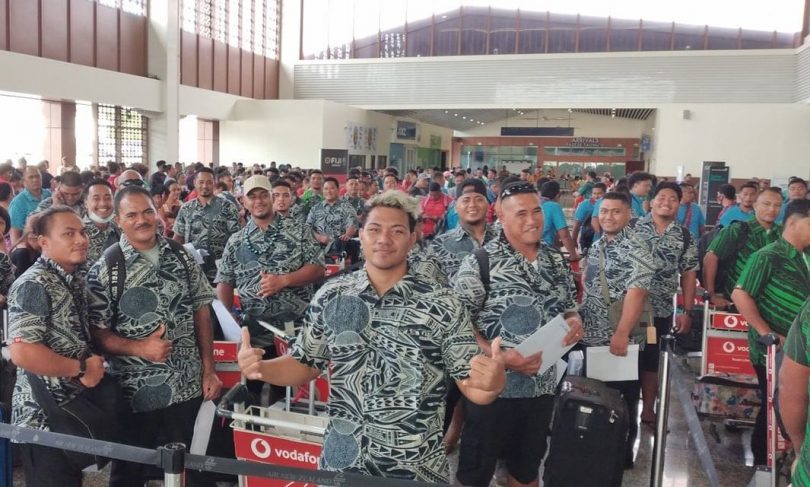 There are several pathways for Samoan workers to sign on for seasonal work in New Zealand and Australia. The first is by joining the Government of Samoa’s ‘Work Ready Pool’ under the Ministry of Commerce, Industry and Labour (MCIL). There is a shorter path when a worker has become known to an overseas employer, is registered with MCIL, and returns to the same employer for subsequent seasons. Another way is for an approved employer to contract a government-licensed agent to recruit workers to their specifications and organise their work trips. For employment under the long-term Pacific Labour Scheme in Australia, workers must provide testimony from their families that they agree that the worker may go.

One of several well-established and widely known non-government recruitment programs in Samoa is that operated under the Poutasi Development Trust (PDT), an organisation that manages a number of village development projects. Training for seasonal work is done by the PDT’s three supervisors, themselves experienced seasonal workers, in twice weekly training sessions over three months. The candidates must be 21 years upwards and must pay WS$50 to register, a payment which does not guarantee selection. This has created a small internal migration trend, whereby aspiring workers have moved from their home villages to live with relatives in Falealili district where Poutasi village is located, hoping to be chosen to join one of the teams.

Six men and one woman among the seasonal workers we interviewed found their initial pathway to seasonal work through their church. One of the most experienced workers, who had worked for ten seasons in New Zealand orchards, explained that his church had sent several groups and gained experience with the paperwork and organisational and legal requirements. Some workers were open about their disappointing experience of working for their church, and compared their experience unfavourably with that of working through the MCIL system.

A woman, who left her young child with her husband and mother, told us that her first contract was organised by her church, but thereafter by MCIL:

The difference between the church and government groups is that I have to be a member of the church to be eligible to be in it, and everything was paid for by the church, that is the reason why I converted to that church so that I can have a chance to go. There was a church member that liaises with horticulture company personnel about this type of work in NZ, and they called our church to organise a group. When we got there, church members offered us a place to stay and we paid them rent.

Most Samoans are socialised to values of strong family solidarity, in which there is an ideal that young adults owe loving service (alofa) to their families and, through their family, to their church and their village. Of our interlocutors, most spoke of their seasonal work in those terms. They described the hardships and disappointments they experienced as seasonal workers, and their self-denial, by saving their earnings rather than spending it on themselves. Many mentioned health insurance deductions, and wondered why they were not refunded if they did not use the insurance. One man said to get his money’s worth he feigned illness so he could get free medicine to take home.

Some spoke of their regular financial contributions to family at home. One of our women interlocutors said she needed to support her mother and family members who had no other source of cash income:

I was wishing to build a new house but because my mother always called to send some money, I always sent $800 weekly. My dreams weren’t fulfilled because of that. Most of my team mates do the same, sending money back home almost every week to their families.

Others spoke of what their savings had done for their family when they brought the money home, telling us proudly that they had become seasonal workers to serve their family. Returning workers who build a new house, buy a car, and give generous church donations all contribute to the social status of their family, regardless of whether they have high rank according to traditional ancestral criteria. One told us that apart from caring for his elderly parents, his church and his contribution to ceremonies (fa’alavelave), his earnings also bought appliances for his family home, an extension of their house, a car, and fencing for a cattle enclosure on family land.

One man told us that his dreams of future prosperity were not fulfilled because he was sent home for fighting with a coworker, which means he won’t eligible to go again. The practice of some villages being banned from sending workers is currently under government consideration.

The eagerness among young adults to become seasonal workers has created opportunities for fraud in Samoa. One woman we interviewed spoke enviously of a relative who had worked in New Zealand. Longing to go too, she and other members of her church had been tricked by a false recruitment scheme. “We were mocked by the villagers because of not going” she told us sadly, and recounted her second unsuccessful attempt: “I have a relative who organised a seasonal group and we went to see him and he interviewed us, but he prioritised his family first before others.”

After more than 50 years of global economic influence since Samoa became an independent state, most Samoans today, whether rural or urban, see their horizons for living as including the wider environments of New Zealand, Australia and the US. The new labour trade has its roots in the Samoan perceptions of the good life, and is motivated by the desire for money and the potential increase in social status that is conferred by having money. This is a rational goal when there are no other comparable opportunities.

This work was supported by an Australian Research Council Future Fellowship grant (FT140100299), ‘New Regional Labour Circuits in the South Pacific: Gender, Culture and Transnationalism’, undertaken at the University of Melbourne.

Angela Anya Fatupaito is an administrative assistant at the Centre for Samoan Studies, National University of Samoa.

Sa'u Emo Tauave is a lecturer in Samoan language and culture at the Centre for Samoan Studies, National University of Samoa.

Malama Meleisea is Professor at the Centre for Samoan Studies, National University of Samoa.

Penelope Schoeffel is Associate Professor at the Centre for Samoan Studies, National University of Samoa.

Tiffany Arthur studied in Samoa as a Caribbean-Pacific Island Mobility scheme (CARPIM) scholar, pursuing a Doctor of Philosophy degree in Development Studies at the Centre for Samoan Studies, National University of Samoa.

Kalissa Alexeyeff is a senior lecturer in Gender Studies at the University of Melbourne.