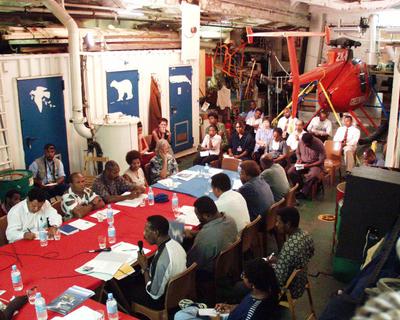 In April this year, the Policy Board of the United Nations Collaborative Programme on Reducing Emissions from Deforestation and Forest Degradation in Developing Countries (UN-REDD) approved the National Programme Document which sets out how the Government of Papua New Guinea proposes to achieve a state of ‘REDD plus readiness’ within the next three years.

This triggers the release of about US$6.4 million towards the cost of making PNG look like it deserves to receive compensation from the international community for various steps taken to reduce carbon dioxide emissions from this source. PNG’s Office of Climate Change and Development is therefore set to lead the rest of the government and the country towards a new era in the financing of forest conservation and sustainable forest management. Or is it?

In the time since the new program of action was approved, Grand Chief Sir Michael Somare has lost the capacity to carry on as PNG’s Prime Minister. This matters because Somare is not only the ‘father of the nation’, he is also the patron saint of REDD, both nationally and globally. He acquired this status in January 2005, when he called for the establishment of a ‘Coalition for Rainforest Nations’ in a speech made to the World Leaders Forum at Columbia University. This wasn’t exactly his own idea, it was the brainchild of Kevin Conrad, whose American missionary parents had befriended the young Somare back in the 1960s. What Conrad offered Somare was a way to kill two birds with one stone. On the one hand, he could postpone the need to take immediate action against the logging industry under the terms of a World Bank loan then under negotiation. On the other hand, he could become the global champion of a scheme that might deliver a larger amount of free money for his government to take the same action later.

Within a year of Somare’s speech to the World Leaders Forum, Conrad became PNG’s official envoy to the UN Framework Convention on Climate Change, the Coalition for Rainforest Nations was established, and Conrad’s Coalition got the Convention to take REDD seriously for the first time. Meanwhile, the PNG government did away with the World Bank’s Forestry and Conservation Project and offered a raft of new concessions to the logging industry. In the new language of REDD, the prospect of additional logging created a new form of ‘additionality’ for anyone prepared to compensate the PNG government for the opportunity costs of forest conservation.

Since 2005, Conrad and the Coalition have played an active role in the negotiation of an international framework for rainforest nations to be paid for what is now known as ‘REDD plus’ — ‘plus’ because improvements in forest management have been added to the conservation of existing forests as activities that could warrant such compensation. But in PNG the progress which had already been made by the time of the Bali climate change conference (COP 13) in 2007 triggered a wave of speculative investment in potential REDD projects which some people have likened to a cargo cult. By the middle of 2009, PNG’s ‘carbon cowboys’ had become an international media sensation. This posed a significant threat to the PNG government’s reputation because Theo Yasause, then Director of the Office of Climate Change, was deeply implicated in the speculation. So Conrad persuaded Somare to dispense with Yasause’s services, announce his government’s official hostility to voluntary carbon agreements, and hired McKinsey and Company to put the climate policy process back on track.

The McKinsey team got onto the case around the time of the Copenhagen climate change conference (COP 15) at the end of 2009. Since then, they have produced a Climate Compatible Development Strategy, an Interim Action Plan, a set of REDD+ Project Guidelines, and have made a substantial input to the UN-REDD National Programme Document. However, their role as ‘technical assistants’ (or phantoms of the opera) in the revamped Office of Climate Change and Development has not been met with universal applause. The ‘marginal abatement cost curve’ which has underpinned the McKinsey approach to REDD-plus policy in several tropical forest nations has got short shrift from radical environmental groups and apologists for the logging industry alike. But in PNG the hostility does not spring from questions of methodology; it is due to the perception that McKinsey’s consultants, like Theo Yasause before them, are simply surrogates for Kevin Conrad, the real target of their animosity.

Conrad’s power to unite the logging industry, environmental groups, and numerous politicians and public servants in opposition to his own designs is partly based on his previous record of business dealings in PNG. This is now supplemented by a strong suspicion that he will find some way to turn REDD into a scam which benefits himself and his close associates. But he does not have many close associates among the people with vested interests in the conservation, management or exploitation of the national forest estate. Now that his principal patron, Sir Michael Somare, has departed the political scene, there is a big question mark hanging over Conrad’s ability to control the REDD-plus policy process, or even to ensure that McKinsey and Company’s bills get paid by the Finance Department. The Office of Climate Change is in danger of becoming a political and bureaucratic orphan while other stakeholders battle it out for a share of the spoils from the UN-REDD Programme and donors grow increasingly despondent about the prospects for effective institutional reform. And that is why REDD-plus is now at the crossroads in PNG.

This is an edited version of a post originally found here on East Asia Forum.

Colin Filer is an anthropologist and associate professor at the Crawford School of Economics and Government, Australian National University.