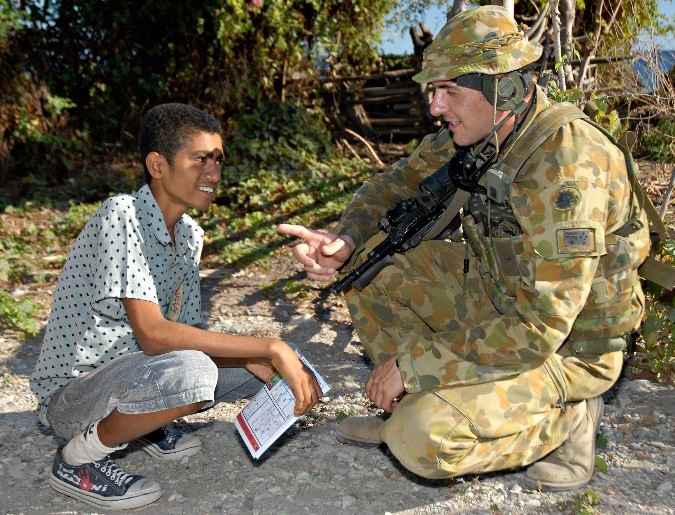 Early on the morning of 30 August 1999, with the roosters crowing and the dew still on the leaves, Timor woke early to choose their destiny with a pen or a nail. Eight months earlier the then President of Indonesia, BJ Habibie, had granted us a referendum on self-determination, and the time had finally arrived.

I was only eight years old and living by the sea in Oecussi, but I remember how excited we were five days later when we gathered to hear the result. About 78.5% of the vote had been for independence compared to just 21.5% for autonomy within Indonesia.

The violence that ensued after that is well known. On 20 September the soldiers and ships of INTERFET had arrived in Dili and put a stop to the worst of it, but in my home district, Oecussi, the militia continued burning houses and schools. Terrified and traumatised, my family and I fled over the border to a refugee camp near the Indonesian port of Wini.

We had to wait a month more until INTERFET got to Oecussi and it was safe to return. Some people say the Australians weren’t planning to come at all until some members of the community sent a boy by the name of Lafu all the way to Bobonaro (a dangerous trip of more than 100km) carrying a note begging for their help. Whatever happened, by the end of October the militia had finally been chased away and it was safe for us to return.

Most of my hometown, a village called Mahata, had been burned down and we lived in a tent city set up in what had been the local primary school. Many were nearly starving, living off what cassava, sweet potato and banana they could forage. Others had managed to stash a stack of rice somewhere safe from the flames, and eventually we were provided with some food by the UN.

Many of us were sick with malaria and dengue, I almost died of it myself, but after that things got a little better. Every day I would play soccer and go fishing. The school had been burned and most of the teachers had left, but we built a shelter out of palm leaves and began to use that. One older teacher still remembered Portuguese and started teaching us. Though we had no text books I remember learning the word for chicken, galinha, and a counting song, um, dois, tres…

Outside school I also liked to teach myself, especially English. I would practice with the malae (foreign) UN soldiers whose base was near my home (see photo). I would always carry around an old Bahasa Indonesia to English dictionary. Slowly life returned to normal.

But although INTERFET succeeded in restoring peace to Timor and addressing the post-war humanitarian crisis, 20 years later things have not improved as much as we had hoped they might. In parts of Dili gangs still sometimes fight each other on the streets and people don’t feel safe. Especially the past years our political system has sometimes been at an impasse, unable to pass budgets or generate results. Many Timorese youth are frustrated, unemployed and disenfranchised. In rural areas, education, access to water and access to health care are lacking.

My message on the twentieth anniversary of our independence referendum is that now Timor-Leste has won its sovereignty, it is the responsibility of all its people to work together to maintain a just and sustainable peace.

For its leaders – bureaucratism, egotism, corruption, collusion and nepotism – all of these must stop. Paralysing political conflicts must be set aside. The youth need jobs, and if they don’t get them there is the risk of a return to conflict. The non-oil economy, especially in agriculture and tourism must be effectively stimulated, along with small village level cooperatives and local production of basic goods.

For its young – the lessons of past conflict must not be forgotten. Respect and dialogue must be part of daily life. There needs to be a spirit of self-reliance, self-education and volunteerism.

To conclude, I have a deep respect and pride in the achievements of Xanana Gusmão for his role in our struggle, both before and after independence, as well as much gratitude to former President Habibie of Indonesia, the former UN Secretary General Kofi Annan and, last but not least, the brave people of my country who voted in the referendum 20 years ago.

This is the first in a series on perspectives from Timor-Leste, co-ordinated and translated by Dr Michael Rose.

Jake Lasi is a student of geology and advocate for the marine environment. As well as studying he is a trainee diving instructor, UN Youth Ambassador for the Oceans and an aspiring entrepreneur. He lives in Dili, Timor-Leste.