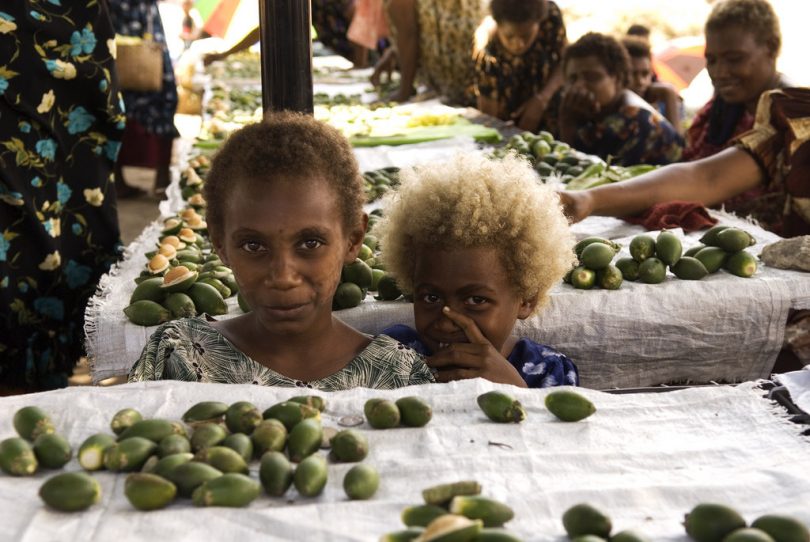 In Papua New Guinea it is commonly assumed that the informal economy operates without any policies or legislation. This view is often attributed to the public’s negative perception of the informal economy. In most locations, informal economic activities are conducted in a chaotic and disorganised fashion with very few controls in place. Market inspectors or urban/town councils rarely enforce relevant rules and regulations intended to protect the interests of consumers and the public. In their absence, the police sometimes step in to bring order through the use of heavy-handed tactics. Such moves are controversial and in some cases fatal, especially when police officers fall victim to the wrath of disgruntled vendors. Such incidents lead to police retaliation, where vendors may lose thousands of kina worth of saleable items.

Managing the upkeep of towns and cities in PNG is a daunting challenge to say the least. Local administrators have limited resources and are faced with perpetual waves of people migrating into urban areas; regulating the informal economy has been an overwhelming task for most urban authorities. As a result, most local government authorities have resorted to imposing bans as a quick fix solution to addressing problems arising from the informal economy. However, these more extreme measures often prove to be unsuccessful.

The National Capital District Commission (NCDC) recently made a decision to ban the sale of cooked food and betelnut at bus stops and in public spaces in a bid to address petty crime, littering and other issues of health and safety in Port Moresby. NCDC introduced the ban citing the Public Health (Sanitation & General) Regulation and Informal Sector Development & Control Act (ISDC) Act. It was inaccurately claimed that the ISDC Act has led to the uncontrolled proliferation of informal economic activities throughout the country. It is important to note that while the ISDC Act “supports” the conduct of informal economic activities it also advocates for “controls” to be put in place. In the case of cooked food and betelnut, it called for “minimum standards” to be adhered to by vendors while authorities like NCDC put in place disposal bins and station inspectors on the ground to enforce the law.

So, contrary to what many Papua New Guineans believe, PNG does – in fact – have a law and policy in place to deal with its informal economy. This makes PNG one of only a handful of countries in the world to give official recognition to its informal economy. The main reason that a lot of people in PNG are in the dark about these provisions is that the National Government has given very little support in terms of funding to raise awareness of these provisions or to ensure adequate implementation. Furthermore, the provincial and local level governments have also failed by not fulfilling their responsibilities to properly administer the conduct of informal economic activities as per the ISDC Act 2004. There was an NEC Decision in 2010, which – among other things – directed that 2,050,000 Kina be factored in the 2011 national budget for implementation of the National Informal Economy Policy 2011-2015, but to date nothing has been forthcoming, and the national government is yet to commit funds to support implementation.

The lack of action on the informal economy by the national government has also contributed to the dilemma that is faced by most of the urban/town authorities in regulating informal economic activities conducted within their respective zones or area of responsibility.

Most urban development plans give little attention to addressing the needs of informal economy participants, so very little attention is given to its support.  For instance, most market facilities are rundown and not enough land is put aside for building both main and satellite markets.

Recently, NCDC closed down the Gordon Market (Port Moresby’ largest market) as part of a three-year development plan that will cost around K30 million. However, questions are being raised about the authorities’ relocation plan with many vendors from Gordon Market missing out in securing a space at the refurbished Boroko Market. These vendors can be seen plying their trade openly along the roads and parks in and around the Gordon Market area. Questions still linger over a portion of the Gordon Market land adjacent to the Gordon Clinic, which reportedly has been fenced off by a foreign business owner. The NCDC Governor, at the behest of the vendors, gave an assurance that development will not proceed on that portion of land (titled Portion No 56) until a detailed investigation was undertaken to determine the legality of the land claim. To this day there has been no clarification regarding the status of that land and the general public and vendors are left in suspense. In the meantime poultry vendors line their stalls along the corrugated fence that surrounds this land with a sense of pessimism – given the APEC Summit is just around the corner. Surrounding the city, a vast colony of the country’s workforce scurry after whatever land that is available at their disposal for shelter. These communities get by without access to basic utilities like power, water and sanitation, while the country’s elites enjoy a comfortable lifestyle living in villas and expensive apartments in various pockets of the city.

The Hon. John Kaupa, Minister for Urbanisation and Housing, has provided hope by prioritising the upgrading of settlements; the people are waiting to see that promise come to fruition. Minister Kaupa has acknowledged that key to this is proper planning and coordination between the service providers, landowners/settlers and the regulators. This is crucial if there is to be progress in tackling the challenges of the informal economy in PNG.