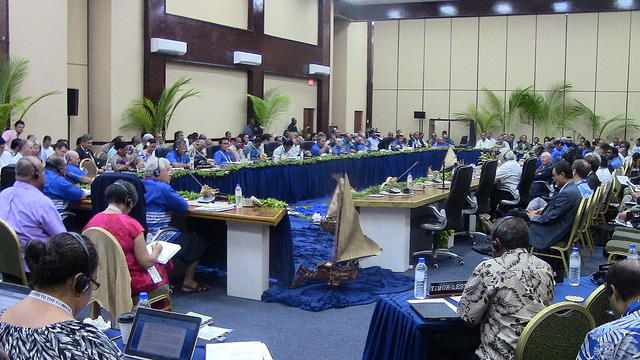 The key body for regional cooperation in the Pacific is the Pacific Islands Forum. The Forum operates as a platform for dialogue and negotiation between independent Pacific island states and Australia and New Zealand. Improving mobility arrangements has long been high on the agenda for Forum leaders. At the 1971 inaugural meeting of the Forum, Fiji Prime Minister Ratu Sir Kamisese Mara suggested Australia should establish a guest worker scheme for Pacific islanders. The following year, when Canberra hosted the second Forum leaders’ meeting, Mara complained bitterly about the strict immigration regulations applied to Fijians (The Age, Feb 22, 1972, p.2).

Forty-five years after the first meeting of the South Pacific Forum, Australia, New Zealand and Pacific island countries have agreed to instigate annual meetings to discuss opportunities for ‘enhancing mobility’ across the region. The inaugural Pacific Labour Mobility Annual Meeting will be held in Christchurch next week (August 22-24). As a standing agenda item on the region’s political calendar, this meeting will be an opportunity to establish a broad regional framework for labour mobility cooperation. At the outset, policymakers will explore ways to enhance existing mobility schemes in Australia and New Zealand. However the meeting is also intended to explore new opportunities for labour mobility in both countries, and in Pacific island countries as well. The annual meeting will also foster cooperation among training institutions, a move that could see greater mutual recognition of qualifications and ultimately, greater skilled migration across the region.

There is no shortage of reforms that could be discussed at the Pacific Labour Mobility Annual Meeting. A key focus will be initiatives that make mobility more accessible to Pacific islanders who have historically had limited opportunities for migration – particularly from larger states in Melanesia. A new World Bank and ANU report, Pacific Possible: Labour Mobility [pdf], outlines a series of policy changes that would increase options for the movement of people to jobs abroad. The report suggests that, if implemented, these reforms would see 80,000 new jobs created for the Pacific, remittances to Pacific island countries increased by 50%, and an additional $US10 billion in income generated.

Whilst temporary mobility and migration present opportunities for Pacific islanders to earn incomes abroad, mobility schemes are not without their issues. Regional political cooperation is needed to consider problems associated with migration and mobility, and to hammer out solutions. Policymakers must ensure that women, and people from isolated or poor communities, have opportunities to participate in mobility arrangements. They also need to ensure that Pacific island workers are not subjected to exploitation by unscrupulous employers abroad. Migrant workers in Australia and New Zealand need effective representation to protect their rights around pay, conditions, and health and safety in the workplace. The Pacific Labour Mobility Annual Meeting should provide an opportunity for consultations between officials in the relevant departments (labour, immigration, education, etc.). It should also provide a space for tripartite dialogue between governments, trade unions, and private sector representatives.

Pacific mobility should not be held hostage to trade talks

Political cooperation to embrace opportunities for migration and mobility has, in recent times, been linked with negotiations for a regional trade agreement among member states of the Pacific Islands Forum (for an overview of recent trade negotiations in the Pacific, see Morgan 2014). Negotiations for the Pacific Agreement on Closer Economic Relations (PACER Plus) – an agreement between Australia, New Zealand and 14 Pacific island countries – have been protracted and mired in controversy. There is growing consensus that a standard free trade agreement would do little to promote economic growth in the Pacific, especially given the island states already have tariff and duty-free access to Australia and New Zealand for their exports. Pacific officials are also aware that any further benefits to be had from liberalising domestic tariffs are best realised by lowering tariffs on a rest-of-world basis.

Pacific trade negotiators have suggested that, given unique trade-related constraints faced by island producers, additional measures should be included in a final agreement if PACER Plus is to promote development in the Pacific [pdf]. One proposed measure has been formal commitments to facilitate labour mobility for unskilled and semi-skilled workers from the Pacific. However, Australian and New Zealand negotiators have rejected this proposal, concerned that such commitments would create a precedent that would be difficult to contain in other negotiations. A compromise, reached in 2015, underpins the launch of the Pacific Labour Mobility Annual Meeting.

An agreement to hold annual regional meetings on mobility and migration looks set to be included as an annexed arrangement to the legal text of the proposed PACER Plus agreement. However, there is no longer any reason why political cooperation on mobility and migration should be linked to the PACER Plus talks at all. Indeed, a recent report from the World Bank, Let Workers Move: Using Bilateral Labour Agreements to Increase Trade in Services [pdf], argued explicitly that bilateral labour agreements are ‘more appropriate’ than trade agreements for regulating labour mobility schemes. Certainly trade unions in Australia, New Zealand and in Pacific island countries have consistently argued that labour mobility arrangements should not be included in a new regional trade agreement (see, for example, this 2010 submission [pdf] by the ACTU to the Productivity Commission).

Finally, cooperation on mobility and migration should not be linked with regional trade negotiations because conclusion of the PACER Plus talks remains an uncertain prospect. Just two weeks ago the Papua New Guinea trade minister Richard Maru told his Australian counterpart he had directed PNG trade officials not to take part in the PACER Plus negotiations. Trade minister for the largest Pacific island economy, Maru has previously labelled PACER Plus ‘a complete waste of time’. He is not alone in his concerns either. Fiji Prime Minister Voreqe Bainimarama explained in May that ‘there simply aren’t enough pluses in it yet for Fiji for us to want to sign it’. In March the Solomon Islands Prime Minister Manasseh Sogavare said his country was interested in strengthening the Melanesian Spearhead Group Trade Agreement before finalising a PACER Plus agreement. Papua New Guinea, Fiji and the Solomon Islands are the three largest Pacific island countries, so that’s hardly a ringing endorsement for PACER Plus.

The good news is, there’s no need to wait for trade talks to be completed. With in-principle agreement to work together to enhance opportunities and solve problems, political cooperation on mobility and migration in the Pacific – including the new Pacific Labour Mobility Annual Meeting – should be clearly separated from ongoing PACER Plus trade negotiations.

Dr Wesley Morgan is a Lecturer at the School of Government, Development and International Affairs at the University of the South Pacific. He is also an Associate with the Development Policy Centre.

This post is the second in a two-part series exploring the politics of Pacific migration and mobility; read the first post here.