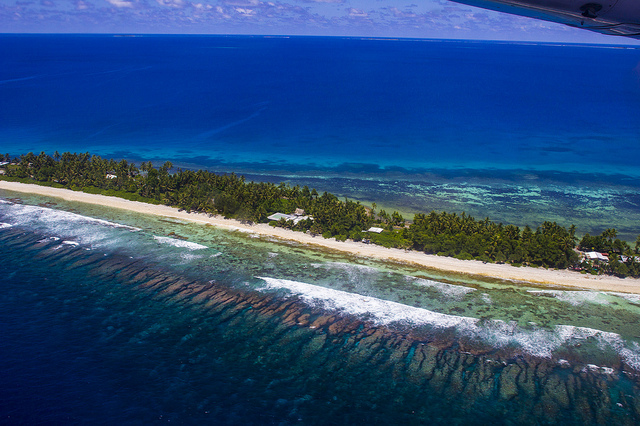 Pacific island countries cannot take the orthodox road to development. Over recent decades, numerous studies have detailed factors of economic geography that make Pacific island states unique, including: small size, distance from markets, expensive transport costs, a heavy reliance on imports, a remarkable vulnerability to natural disasters and, increasingly, exposure to the effects of climate change. These features of island economies mean that the cost of production in the Pacific is higher than it is in most other parts of the world. In this context, orthodox prescriptions for economic growth and export-led development do not hold, and policymakers must look for unique solutions. Increasingly, attention is being paid to opportunities linked with migration and mobility.

With access to air travel, and growing living standards on the ‘Pacific rim’, Pacific islanders have been leaving home in substantial numbers since at least the 1970s. Initially, this was considered a ‘straightforward developmental loss to the community of origin’. However, researchers investigating the effects of outward migration subsequently found many workers continued to remit a percentage of their income back home, and that these remittances were critically important for a number of island economies. This economic behaviour was, and is, grounded in Pacific cultures of family and community obligation. Mobility is not new for Pacific islanders. As philosopher Epeli Hau’ofa poignantly argued in his seminal essay Our Sea of Islands [pdf], contemporary travel in search of economic opportunity is a form of ‘world enlargement’ which represents a continuation of long Pacific traditions of connection and movement between geographically dispersed peoples.

Even as Pacific people ‘voted with their feet’ by seeking work abroad, policymakers continued to have their doubts. Early in the post-independence period there was concern that relying on remittances constituted a form of economic dependency; one which did not sit well with rhetoric about autonomous development strategies. Furthermore, a number of economists suggested remittances would undermine longer-term sources of economic development by drawing away productive labour, and would undercut competitiveness by driving up domestic wages. Many experts also argued remittances were an inherently unstable source of income, which could not be considered a sound basis for economic development (for discussion, see Poirine 1998 [pdf]).

In recent times however, there has been a growing consensus that migration and mobility are important drivers of development in Pacific island countries. Whilst not a panacea, there is evidence that there are ‘triple wins’ to be had. Both longer term migration and temporary mobility arrangements can entail economic benefits for migrants themselves, for the sending country, and for the receiving country. In 2006, an influential report from the World Bank recommended [pdf] that pilot mobility schemes be pursued ‘between Pacific populations and other nations with an economic need for unskilled labour and a development interest in the Pacific region’. Over the following decade, both New Zealand and Australia introduced, and expanded, temporary mobility schemes allowing Pacific islanders to work in rural industries on a seasonal basis. Thousands of Pacific islanders have since taken up this new opportunity to earn incomes abroad.

As climate change brings new challenges, Pacific policymakers are calling for other forms of mobility as well. In 2015, leaders from the Coalition of Low-Lying Atoll Nations on Climate Change (CAN-CC) – including the President of Kiribati and the Prime Minister of Tuvalu – stressed that labour mobility ‘provides immediate climate change adaptation benefits’. With careful planning, greater mobility can help people living in atoll nations to strengthen their resilience to the impacts of climate change (for analysis of the policy issues involved with extending labour mobility opportunities to these communities, see Ash and Campbell 2016). However leaders from atoll states are also calling for support to prepare their people for ‘migration with dignity’. Faced with the reality that global negotiations look unlikely to prevent changes to the global climate system that threaten the very existence of their nations, leaders from atoll states suggest the time has come to plan for migration and resettlement. These calls are being heard by policymakers abroad. As Australian shadow minister for immigration Richard Marles indicated late last year, ‘Australia being a destination for climate change migrants surely has to be up for discussion … we have to talk about this now rather than wait until the issue is upon us’. A new report [pdf] from the World Bank and the Australian National University (ANU) proposes the establishment of an Australia and New Zealand Atoll Access Agreement, which would allow open access to Australia and New Zealand for people from the atoll nations of Kiribati and Tuvalu. People living on other atoll islands in the Pacific already have migration opportunities to metropolitan countries (namely France, New Zealand and the United States). Analysis contained in the World Bank/ANU report suggests open access would see i-Kiribati and Tuvaluan migration to Australia and New Zealand increase significantly, while remaining a tiny fraction (0.6 per cent) of the overall permanent migration program.

Dr Wesley Morgan is a Lecturer at the School of Government, Development and International Affairs at the University of the South Pacific. He is also an Associate with the Development Policy Centre.