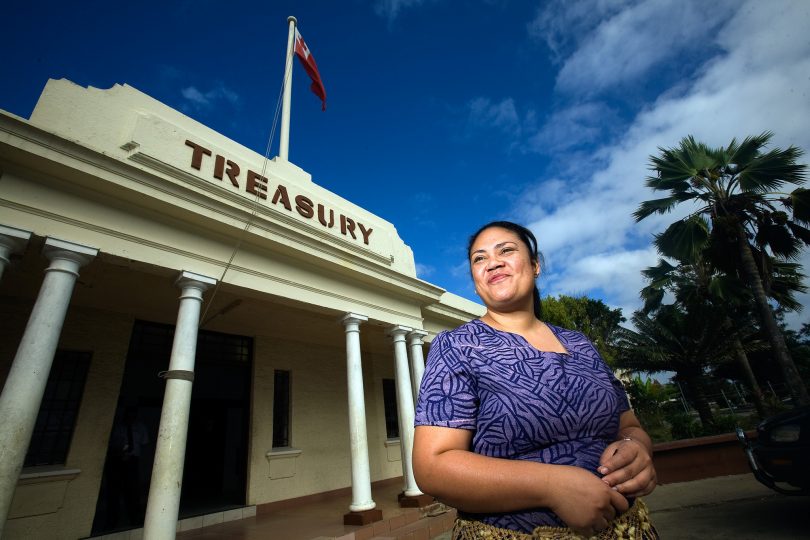 The politics-administration dichotomy has long been a subject of considerable debate in public administration. Despite the argument that there is no strict separation between politics and administration, the tension between the two continues to be significant. This post explores why, and the extent to which, countries seek by various legislative means to maintain political neutrality in administration and restrict political involvement by public servants. The 12 countries whose governmental systems are examined here can be divided into three regional groupings: Melanesia, which includes Fiji, Papua New Guinea (PNG), Solomon Islands and Vanuatu; Micronesia, which includes Kiribati, the Marshall Islands, Micronesia, Nauru and Palau; and Polynesia, which includes Samoa, Tonga and Tuvalu.

Table 1 records whether or not legislation in the countries being addressed includes specific reference to political neutrality, and whether or not there are legislative restrictions on political involvement by public servants. 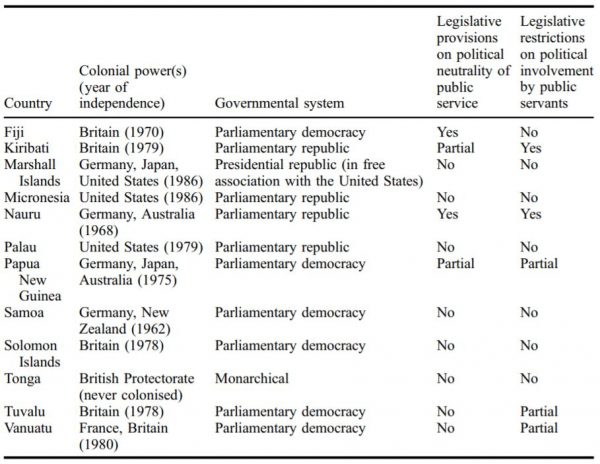 Source: Drawn from Corbett and Veenendaal (2016) and countries’ statues and regulations

In Kiribati, the relevant legislative provision focuses on political involvement by public servants. It specifically discourages officials from participating in political activities that are contrary to the government’s policies (National Conditions of Service, 2012, D13(a)). Vanuatu and Tuvalu also have provisions limiting the political involvement of public officials. There are certain legislative requirements that need to be fulfilled for a public servant who considers joining politics. They must resign before signing up to join a political party (in Vanuatu: Public Service Act, 2001, 32(2)), or seek the direction of the responsible minister that restricts the public officer’s preparation and participation in politics (in Tuvalu: Public Service Act, 2008, 14).

A less-encompassing legislative restriction exists in PNG. There, while making no mention of public servants themselves, the Public Services Management Act (2014, 8(a)) prohibits members of the Public Service Commission from engaging in politics.

By contrast, in the Marshall Islands, the Public Service Regulations (2008, 48(2), (4)) allow public servants to be active members of a political party and to become candidates for political office, so long as campaigning does not take place during official work hours on official premises. Similarly, in Palau, public servants have the right to attend political rallies, fund raising functions and other political gatherings (Rules and Regulations, Public Service System, 1997, 14(1)(b)). In both countries, however, public servants are not to use their office or official influence to interfere with an election or to affect the results of an election. Four of the countries have no legislative provisions specifically concerning political neutrality and political involvement by public servants. These are Micronesia, Samoa, Solomon Islands and Tonga.

The dynamics and complexities of finding the right balance between politics and administration are highlighted using the indicators of government effectiveness and capacity in the Pacific (refer to Table 2, which is based on an ADB report, State Performance and Capacity in the Pacific). It is not possible to make causal claims or to discern a distinctive pattern in the relationship between politics and administration. Generally, it can be hypothesised that a higher degree of politicisation is likely when the quality of public administration and capacity of a state are weak and/or when transparency and accountability in the public sector are poor; and, conversely, that a lower degree of politicisation is likely in circumstances of political stability, effective governance, and meaningful accountability and transparency. But these possibilities frequently tend not to reflect reality, with the experience of the Pacific island countries displaying no clear trends in the relationship between the politicisation of the public service and the capacity and effectiveness of government and governance. 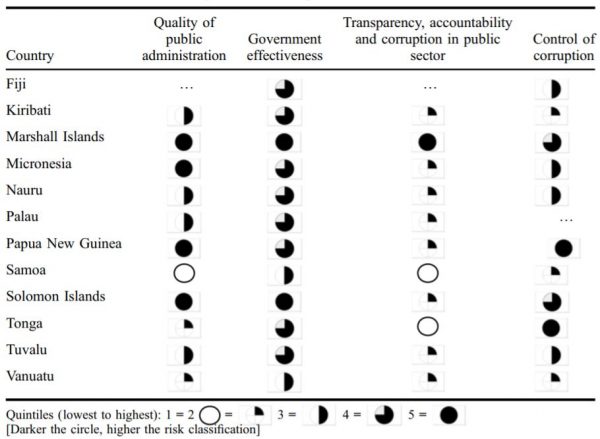 The information from Tables 1 and 2 and the associated analysis of legislation and governance indicators show a mix of arrangements concerning the politics-administration relationship in the countries studied. It is clearly not possible – and even if it was possible, not necessarily at all sensible and desirable – to forge a clear separation between politics and administration in practice. Significantly, countries in which legislation is in place prescribing a neutral public services face as many challenges in terms of the capacity and effectiveness of government and governance as those in which degrees of public service politicisation are formally endorsed. In some of the countries, as in Nauru where such legislation exists and is quite explicit, public servants inevitably get involved in political work, as well as in other forms of employment, at least partly as a consequence of the countries having a small number of people. In Fiji which also has such legislation, various political or special advisors have been appointed to complement or replace some heads of departments who have not been compliant to the whims of ministers.

Despite what happens in practice, countries continue to pursue or prescribe an apolitical public service and restrict the involvement of politics by public servants. The reasons for adhering to the idea of a politics-administration dichotomy continue to have political and administrative salience. The idea remains convenient, for example, in explaining the division of political and administrative roles in the interests of politicians and administrators in determining the allocation of responsibility for who does what and who should be rewarded or blamed for action taken. As such, it can often serve very effectively to focus, or divert, attention in terms of who ought to be the appropriate targets of accountability demands and anti-corruption measures.

In all of the countries, there is merit in the complementarity and layering of politics and administration being fully appreciated and embraced in ways that are likely to enhance the capacity and effectiveness of government and governance. It is critical that political and administrative leaders recognise the value of utilising the interdependence and reciprocity of politics and administration in the public interest. Such recognition and the responses to it must be appropriately geared to the particular political and socio-economic contexts involved. This requires considerable political and administrative astuteness, including an ability to cope effectively with the fluidity of power relationships and the demands of strategic action in the ongoing processes of change and reform.

Lhawang Ugyel is a Lecturer in Public Policy at the University of Papua New Guinea, under the ANU-UPNG partnership. This post is based on his article recently published in Asia Pacific Journal of Public Administration.