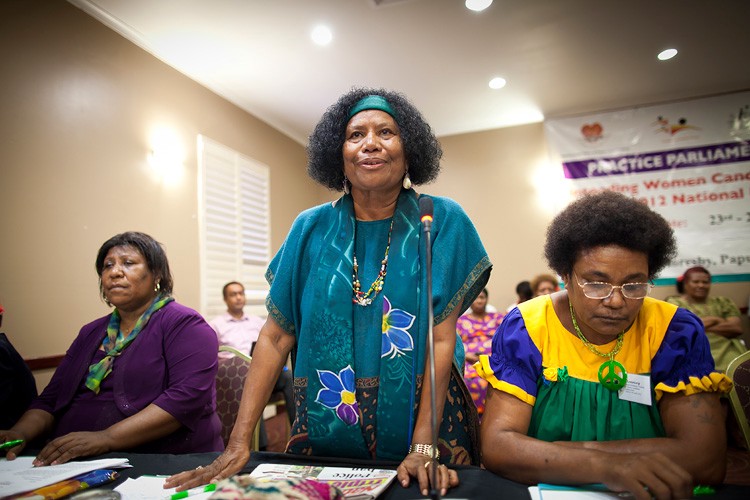 Papua New Guinea (PNG) is one of three countries without a single woman in parliament. Two previous attempts to increase women’s representation in PNG’s parliament were unsuccessful. In light of the proposal to create five reserved seats for women before the 2022 elections, this article looks at the past efforts and the challenges that lie ahead.

This process began with a call for expressions of interest, which attracted 78 applicants. A human resources (HR) company was engaged to undertake the process of selecting 12 women from 78 applicants. The HR company provided 12 names to a panel. After interviewing the candidates, the panel recommended six women to Prime Minister Michael Somare and Opposition Leader Mekere Morauta, who were tasked with selecting three to be nominated as women representatives. The night before voting, the opposition withdrew their support for the proposal, and didn’t submit their list. Somare selected three women and presented the names to parliament for voting but failed to get the mandatory two-thirds majority to nominate them – 60 MPs voted for the proposal, 16 voted against it, and 33 abstained. Although the nomination approach fell short in 2009, it could be revived again. Yet in recent years a different approach has been taken: reserved seats.

After failing to have women nominated through existing provisions of the Constitution, women leaders lobbied for the creation of 22 reserved seats for women based on provincial electoral boundaries. This approach had an obvious strength: reserved seats would see women MPs elected by voters, not appointed by political leaders. Reserved seats required an amendment to section 101 of the Constitution, with the addition of section 101(d) creating the seats. This amendment just needed a simple majority in parliament. Yet, the enabling legislation involved an Organic Law, which required a two-thirds majority. When the vote for the enabling legislation, the Organic Law on National and Local Level Government Elections, was taken in early 2012, it failed to reach the two-thirds majority. By then, Somare – who had been supportive of the reserved seats – had been removed as prime minister in 2011, and Dame Carol Kidu had moved to the opposition. The new O’Neill government failed to pass the enabling legislation.

Despite both attempts failing to increase women’s representation, they started a nationwide conversation, and in 2012, three women were elected to the PNG parliament. However, the three failed to be re-elected in 2017, and no new women were elected.

The current proposal to create five reserved national seats for PNG women is a repeat of the 2011 efforts, but with a reduced number of seats. Each of the proposed seats will be allocated to a ‘region’ including the Highlands, West Papua, East Papua, New Guinea Islands and Momase.

From past experience, the main challenge will be mustering the political will to amend the Constitution and pass the enabling legislation. It’s hard to tell if this support exists, but there are encouraging signs.

In the past two attempts, the proposals for increasing women’s representation were driven by women and stakeholders who were non-parliamentarians, with the exception of Dame Carol Kidu. This time there seems to be more support within parliament. In November 2019, Prime Minister James Marape said there would be no reserved seats for women. But he now supports the ‘reduced’ proposal. In the case of the parliamentary opposition, when Peter O’Neill was prime minister in 2019, he promised that if there were no women elected in the 2022 election he would revive the proposal for 22 reserved seats. And if that didn’t attract support from politicians, he would push for four reserved seats. Furthermore, a coalition of 20 MPs from both sides of the house, who make up the Parliamentary Committee on Gender-Based Violence, are supporting the current proposal.

There is also a promising proposal before parliament to revise the Organic Law on the Integrity of Political Parties and Candidates to require that at least 20% of all parties’ candidates be women.

The Autonomous Region of Bougainville, which has reserved women’s seats in its parliament, offers lessons on the limitations and challenges of reserved seats. The size of reserved seat electorates in Bougainville are larger than the 33 open seats, which requires extensive resources and time to campaign. Also, the discretionary funds allocated to these electorates aren’t proportional to their size. They get the same amount as the smaller open seat electorates, making it hard for the representatives to tangibly help their constituents.

If national regional seats for women are created, the challenges will be even greater. The proposed regions are vast. It’s hard to see how aspiring regional MPs will be able to gather meaningful support across their regions. Without a substantial support base, the new MPs’ mandate will be weak. What’s more, without adequate resources, the new MPs will face major challenges engaging with their constituents.

Since Bougainville created the reserved seats in 2004, women have been elected to these seats in four consecutive elections – 2005, 2010, 2015 and 2020. However, women contesting open seats have had little success, with just one woman winning an open seat in 2015 and another in 2020. There is a misconception that since women have reserved seats they should not be elected to the open seats. As Bougainville has shown, reserved seats are a good way of getting women into parliament. Yet it has also shown that large reserved seats create problems of their own. These problems will be greater in the regional seats proposed for PNG’s national parliament.

Danny Eric Argon is a political science student at the University of Papua New Guinea.