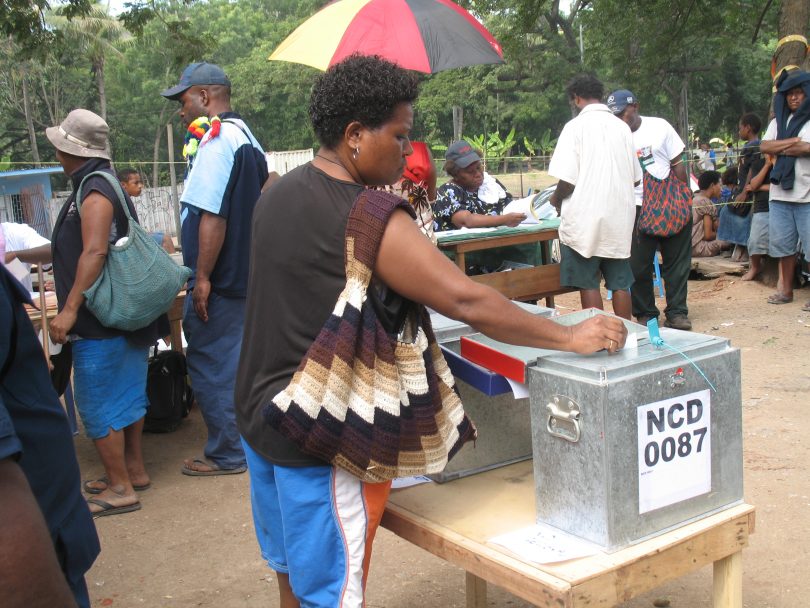 The results of the 2022 PNG elections confirm that women will once again sit in PNG’s parliament, after a hiatus of five years. The 2022 elections were therefore not exactly a repeat of the 2017 elections for women candidates, but much more work is needed if significant numbers of women are to be elected.

There were ten other women candidates who were placed within the top five for the seats that they contested (see the list at the end).

So, unfortunately for democracy, PNG’s 11th parliament will again be an overwhelmingly male-dominated legislature.

But, while the results for women candidates were not an exact repeat of the 2017 elections, the barriers and challenges that women experienced most definitely were.

PNG media reported many problems with the conduct of the 2022 elections by the Electoral Commission. Several of the PNG Post-Courier editorials have been very critical, claiming that the elections may be the worst since independence. PNG election analyst Terence Wood concluded that whether or not it was as bad as 2017, the 2022 elections “have still been much worse than the people of PNG deserve”.

Many thousands of voters could not vote because their names were not on the electoral roll, which had not been updated since 2017. There was also inadequate security at polling and counting centres, and poor logistics and handling of election materials. As a result, the elections were marred by allegations of fraud, corruption and foul play, which were the catalyst for violence and chaos in parts of the country, including in the capital Port Moresby. The post-election reports from international and domestic election observer teams will document in detail the poor conduct of the 2022 elections.

Violence, bribery, vote rigging, stolen ballot papers, and manipulation of counting at counting centres all disadvantage women. Female candidates publicly condemned the undemocratic nature and practices during polling and counting in Enga and Jiwaka provinces. They were joined by former member for Eastern Highlands Province Julie Soso, NGOs, and more than 100 women leaders who protested about the way in which their right to vote had been taken away by corruption, violence and intimidation by male candidates and their supporters. Some women candidates in Port Moresby used their social media platforms to call corrupt electoral officials, candidates and their supporters to account.

In light of the results of the 2022 elections, the PNG government should reconsider the role that temporary special measures (TSMs) could play in increasing the number of women elected to parliament. However, attaining political will at the highest level will be a formidable challenge.

The Special Parliamentary Committee on Gender-Based Violence (SPC-GBV) tabled the second and final Report of the Committee on 21 April 2022, which included recommendations for immediate action by the next government in respect of TSMs and other measures to support the political empowerment of women. They included support for the 2011 proposal to reserve 22 seats for women, and a party candidate quota, as specified in the amended Organic Law on the Integrity of Political Parties and Candidates (OLIPPAC).

The Prime Minister James Marape has already rejected outright the need for reserved seats for women. Making reference to Rufina Peter’s election to Governor of Central Province, he claimed that “any women can win any election, they do not need special seats in Parliament”. He maintained that women can win on their merits, but acknowledged the flaws with the electoral process in 2022 that made it much more difficult for women to get elected, and promised to improve the electoral process to make elections free and fair.

However, Marape has yet to comment on the amended OLIPPAC, which was approved by the National Executive Council and tabled in parliament on 3 January 2020. This legislation includes section 56(4) which states that: “A registered political party shall, from the total number of candidates nominated by the party in a general election, ensure that twenty percent of these candidates are women candidates.”

Political party quotas would therefore be a positive step, but will not be enough. What is also needed is a holistic reform of the electoral process to make it more accommodating of women as both candidates and voters.

The ten women who finished between second and fifth were:

Jean Eparo Parkop – an Independent candidate who contested for the second time for Northern (Oro) Regional and came in second place.

Delilah Gore – a People’s National Congress party candidate who contested for the third time for Sohe Open and came in third place.

Jennifer Baing – a People’s Movement for Change party candidate who contested for Morobe Regional and came in third place.

Lynn Ozanne Ronnie – an Independent candidate who contested for Manus Open and came in third place.

Vikki Mossine – a Future of PNG Party candidate who contested for Rigo Open and came in fourth place.

Rubie Wanaru Kerepa – an Independent candidate who contested for Kavieng Open and came in fifth place.

All were first-time candidates except for the first two, and eight of the ten candidates were endorsed by political parties.

Dr Lesley Clark served for five terms in the Queensland Parliament in Australia. Since 2006 she has consulted on projects in the Asia Pacific region to increase the political participation of women. She has participated in several election observation missions, including the last three in Papua New Guinea.

Teddy Winn is a PhD candidate in Political Science at James Cook University.