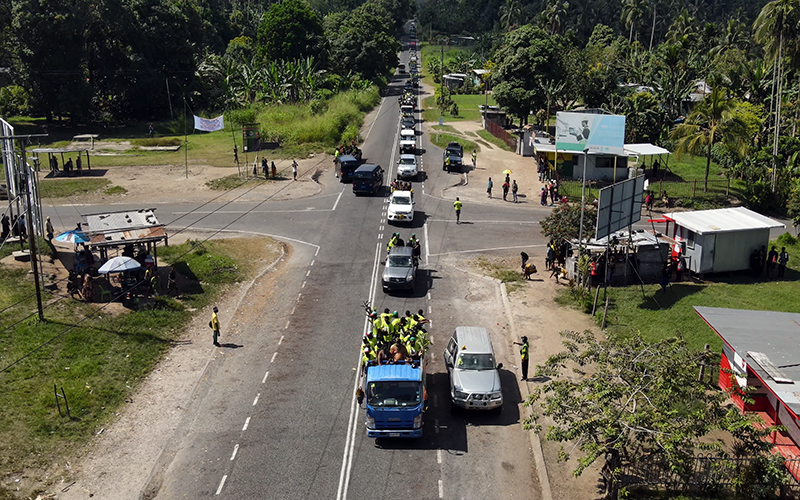 The dust is still swirling, far from settled, and already people are calling the 2022 elections the worst in Papua New Guinea’s history.

Is that correct? I don’t know – the 2002 and 2017 elections provide stiff competition. And in some ways, 2022 hasn’t been as bad as I feared. The PNG Electoral Commission abandoned what would have been a disastrous decision to count first preference votes at polling stations, and coped with the last minute redistricting curveball parliament threw its way. It’s too soon for proper comparisons, but the violence may end up being less than in 2017. And all over PNG people did something that they rarely get credit for: they organised, or participated in, an election in a poor and poorly governed state. In much of the country, logistics teams, polling officials and counting officials did their job, despite the frustrations and danger. The national electoral commission managed to oversee all this, more or less. It’s something.

And yet, the elections have still been much worse than the people of PNG deserve. There has been violence, there have been murders – no one should die in an election. Many aspiring voters weren’t able to vote safely. The common roll was simultaneously antiquated, dilapidated and manipulated. Problems like the hijacking of ballot boxes, and attacks on counting centres, occurred in parts of the country that previously haven’t suffered from them. And troubles in traditional hotspots were shocking. Petitions alleging electoral malfeasance will clog PNG’s courts for years.

PNG’s democracy can’t continue this way. Problems are spreading. Cynicism about the electoral process is on the rise. If electoral violence becomes normalised in more and more electorates, it will become next to impossible to control and harder still to reverse.

Why has this happened? Although claims of grand electoral conspiracies involving the PNG Electoral Commission are commonplace on the internet, as UPNG academic Maholopa Laveil has pointed out, there’s no good evidence they are true.

The actual explanation for PNG’s electoral woes is more prosaic, and also probably harder to address. It stems from the country’s political economy, and the voter-politician relationship. When they are free to choose who to vote for, most voters in PNG vote for candidates who they think will help them, their family or their community directly. They don’t vote on national issues or policies. I’ve explained elsewhere why this is a perfectly sensible way to vote. But it’s also problematic: it incentivises members of parliament to focus on getting resources directly to their supporters. At the same time it provides MPs no political reason to worry about governing well in the interests of the country as a whole.

And so national issues are neglected. MPs mostly have no electoral reason to focus on them. For the five years they are in power, MPs worry about wiggling their way into (electorally advantageous) ministerial roles and making sure constituency funds keep flowing. Prime ministers worry about holding together governing coalitions. Ministers rarely master their portfolios: they’re too busy carefully manoeuvring around the PM. Senior politicians only pay attention to national issues when they become too critical to ignore.

From rundown roads to ramshackle health clinics, a suite of woes trails in the wake of this dynamic. Elections are a national issue, so they’re neglected until they can’t be ignored. Electoral quality is another casualty.

Well-run elections take a lot of planning and ongoing preparation throughout the so-called electoral cycle. But in PNG, politicians don’t think about, or spend money on, electoral quality until the last minute, and then it’s too late. That explains the, effectively useless, state of PNG’s roll: rolls take a long time, and require money, to prepare and validate in a country like PNG.

The fact that PNG’s politicians know – or care – so little about electoral quality also explains other decisions, such as the last minute creation of seven new electorates just before the 2022 election: no one who had thought carefully about elections would have inflicted this on an already stretched electoral commission. But PNG’s parliament voted for it.

With national neglect and a weak national electoral commission, electoral quality in PNG largely comes down to provincial electoral commissions and local communities. In much of the country they are able to run elections well either because provincial institutions function without assistance from national ones, or because community social capital helps. Elsewhere, however, political strongmen (always men) are able to buy or coerce provincial and local officials to do their bidding. I’ve spoken to electoral officials who told me about the death threats they received. I’ve heard of candidates kidnapping officials’ family members in the lead-up to elections.

Locally, electoral norms also have a major influence on how elections are run: if other candidates are coercing voters in their villages, why not do it yourself? If other candidates’ supporters attacked your supporters last election, why not get revenge this time round?

Norms make the disastrous election of 2022 all the more worrying. The more cynical and disillusioned voters feel now, the worse behaviour is likely to be in 2027. The increasing spread of problems in 2022 means there will be more parts of the country prone to trouble five years from now. PNG’s democracy can’t withstand this forever. Something has to be done.

What exactly, and the importance of Australian aid, will be the subject of my next post.