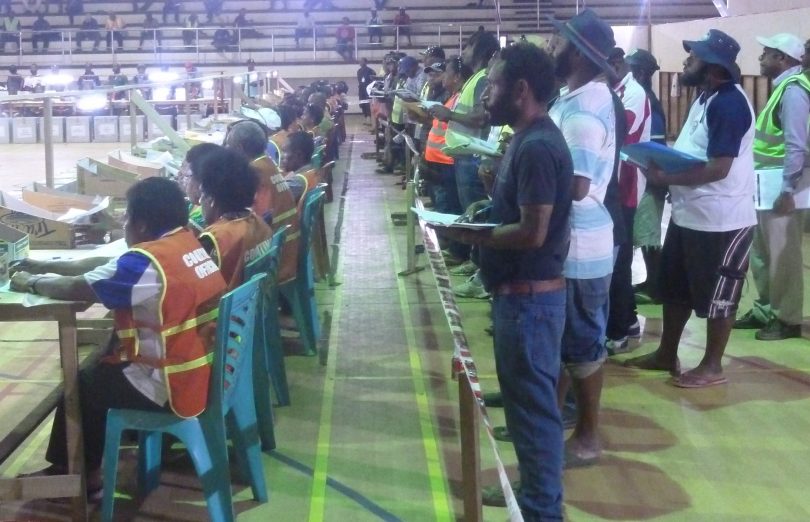 Scrutineers watching as ballots are counted in Lae, 2017 (Terence Wood)

Papua New Guinea is set to hold elections halfway through next year. Unlike many developing countries, PNG did not lapse into autocracy in the wake of independence. Its history of regular elections is something to be proud of.

PNG’s elections have been troubled though, particularly since the turn of the millennium. The 2002 elections were tumultuous. There were improvements in 2007, but they weren’t sustained. The most recent elections in 2017 were marred by roll problems and vote buying nationwide, as well as coercion, voting fraud and violence in places.

The state of the 2017 elections alone provides reason to worry about next year. But the 2022 elections are also beset by an additional suite of concerns.

First, there is COVID-19. PNG may have had a lucky run so far, but the virus is becoming more infectious. And campaigning in state elections in India, which occurred before the most recent variants of the virus arrived, brought a rise in infections, showing just what COVID-19 can do when combined with election fever.

Financially, the pandemic has also left the government of PNG cash-strapped. Even in better times, PNG’s governments haven’t had a good track record of adequately funding elections. Now, with the government feeling the fiscal squeeze, funds are less likely to flow.

Second, the electoral clock is ticking. Polling is scheduled to start in late June (the formal electoral process starts earlier with the issuing of writs in April). Yet the electoral commission has barely begun the challenging task of updating the electoral roll. Why? It hasn’t been given the money it needs.

Third, the government is making the task of successfully running fair elections harder for itself. Plans are afoot to introduce new biometric voter registration technology in PNG. When used well, some types of biometric technology can improve elections, but the tools are no panacea: many electoral issues are unaffected by technological fixes. What’s more, biometric electoral systems can go badly wrong.

It’s hard to glean from media reports exactly what’s being planned in PNG. But it seems to be photo ID cards and a photo roll, trialled first in Port Moresby, where fingerprints will also be gathered, and Central Province, followed perhaps by national implementation next year.

ID cards are simpler than some biometric tools, but still sound ambitious given the PNG’s ongoing travails trying to implement a non-electoral national ID card system. What’s more, there just isn’t time to implement a major new electoral technology nationwide. Trials in a small number of electorates might be feasible, but even these will be a distraction in the midst of a difficult election.

In addition, as Maholopa Laveil points out in his excellent Lowy Interpreter blog, plans are afoot to count first preference votes locally rather than at central locations like district capitals, as was done in the past. This is a risk: when counting is centralised, it happens under the watchful eyes of multiple candidates’ scrutineers, which reduces counting fraud. However, local counting places could easily be dominated by individual candidates, particularly in parts of the Highlands. Some will likely become dangerous no-go zones for other candidates’ scrutineers, which increases the chance of fraud.

This issue might be offset by the subsequent counting of voters’ second and third preferences at centralised locations, which is currently planned. (PNG uses a limited preferential voting system in which voters indicate their first, second and third most preferred candidates on their ballot paper.) But this failsafe will only help if ballots make it to central locations, something that seems far from guaranteed if ballot boxes have already been stored and opened locally.

A pandemic, no money, a late start, and unneeded or unhelpful changes to electoral procedures. It’s a worrying list of woes. What can be done?

Two problems could be fixed very easily: by doing nothing. Don’t use biometric technology and don’t change the counting process. Neither decision is set in stone. They would be easy to reverse.

Another problem could be resolved simply enough too. The government needs to give the electoral commission the money it needs. Now. The government may be short of cash, but it’s not broke. The money could be found. And preparation such as roll updating cannot wait.

Obviously, the main roadblock here is the government of PNG. Its political leadership needs to prioritise electoral spending. Australia needs to help too though. Normally, most of the money for running elections in PNG comes from domestic revenue, not aid. But Australian aid and loans are helping to keep the PNG government afloat financially right now. Whether it likes it or not, Australia is part of the electoral funding equation and it needs to work with the government of PNG to ensure the 2022 elections are prioritised.

Australia and other donors need to keep helping with vaccines too – more vaccines, more urgency, and learning more about overcoming vaccine hesitancy will be crucial if the health risks of the election are to be minimised.

Medically, it might be better still if next year’s election could be delayed. But the rules of PNG’s constitution appear clear: an election is required next year. Even if a delay could be arranged within the constitution, such an unprecedented move would bring the risk of raised political tensions.

Recent elections in PNG have been troubled. This hasn’t usually been the fault of frontline workers – national and provincial electoral commission staff, and polling officials. Mostly they do their best in tough and sometimes dangerous circumstances.

Electoral officials need help though. PNG’s political leaders need to start helping. Australia and other donors need to fully engage too. A lot went wrong in the 2017 elections in PNG. No one wants 2022 to be worse. Now’s the time to make sure it isn’t.

Terence is very grateful for the feedback of UPNG academics Maholopa Laveil and Michael Kabuni. All errors and omissions are Terence’s alone.