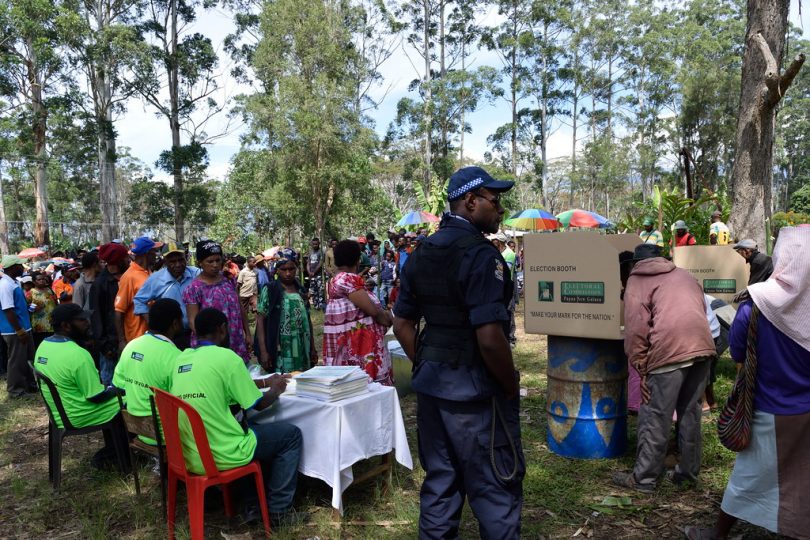 The 2002 election stands out as the most dramatic in PNG’s history. It was fiercely contested, marred by violence and fraud, and led to a record number of MPs losing their seats. In this post I describe the election, the turbulent years that preceded it, and its consequences.

The years prior to the 2002 elections were years of reform and contention. In 2001, two reforms led to public unrest. The first concerned the sale of the PNG Banking Corporation (PNGBC, PNG’s state bank), which had become insolvent. The second involved purported land mobilisation legislation.

A two-day protest that year brought together workers opposing the sale of PNGBC for fear of job losses, and a combination of UPNG students, the public, and NGOs opposing land reform. Things came to a head when three students were fatally shot by police.

Then there were problems with the administration of the 2002 elections. An update of the voting roll was poorly implemented for a number of reasons: the enrolment of voters was not cross-checked with the 1997 roll, deletion of old names was not completed, in some cases, the roll was captured by powerful candidates, and funding was delayed.

The problems with polling in 2002 were also worse than in previous elections. During polling, a range of offences were observed: denial in the privacy of voting, coercion of voters, threats of recrimination if voters voted against a particular candidate, impersonation of eligible voters, multiple voting, and intimidation and bribery of polling officials and police.

Problems with the count also reached alarming levels in 2002: several ballot boxes were blockaded and diverted, several ballot boxes were stolen, electoral officials were pressured to authenticate and accept ballot papers, completed ballot papers were destroyed on the way to counting, aspects of the count were fraudulently manipulated, the count was delayed in some places due to untimely release of funds, and violence disrupted counting.

All told, approximately 100 people died from election-related violence (far higher than in 1997 and in previous elections). In six Highlands electorates, elections failed on the grounds of widespread cheating. (No electorates had failed elections in 1997.) Roll inflation nationally reached all-time highs, with the roll total 75 per cent higher than estimated voters (up from 26 per cent in 1997). This enabled votes to exceed voters nationally by 9 per cent (voter turnout was 89 per cent in 1997) – the only election in history when votes have exceeded voters nationally.

The 2002 election was unique in other ways. Although candidate numbers increased modestly from 1997, the number of parties that contested the election was almost double 1997 numbers, increasing from 23 in 1997 to 44 in 2002. The number of “powerful” parties was also its highest ever, with 13 parties endorsing candidates in more than half the nation’s seats (up from 6 in 1997). Many candidates identified with parties, with the share of candidates running as independents at its lowest ever, falling from 73 per cent in 1997 to 43 per cent in 2002.

In the wake of heavily contested reforms and economic hardship, political engagement was at an all-time high. This, I believe, translated into the rapid rise in parties. Although, it wasn’t the only cause – more powerful parties and a genuine sense of unrest likely contributed to fraud and violence at the election.

Economic hardship and political discontent also almost certainly contributed to the fact that 74 per cent of sitting MPs lost their seats, the highest incumbent turnover rate in PNG’s history. Incumbent turnover is normally high (an average of 55 per cent in the country’s nine elections), but in 2002 almost three-quarters of MPs did not return after election.

The final consequence was that reforming Prime Minister Sir Mekere Morauta was ousted from office. Morauta himself retained his seat, and his People’s Democratic Movement party managed to win 12 seats. The National Alliance party, however, won 19 seats, headed by Sir Michael Somare, and was invited to form government.

The elections of 2002 were turbulent elections born of turbulent times. Looking back, Morauta’s time in office is seen as one of important reform, and rightly so, but at the time perceptions of political turbulence and economic hardship dominated. The result was not just a three-quarter spill of the PNG parliament but the end of any serious appetite for major economic reform among the country’s politicians.

The author would like to thank Dr Terence Wood for comments on earlier drafts.