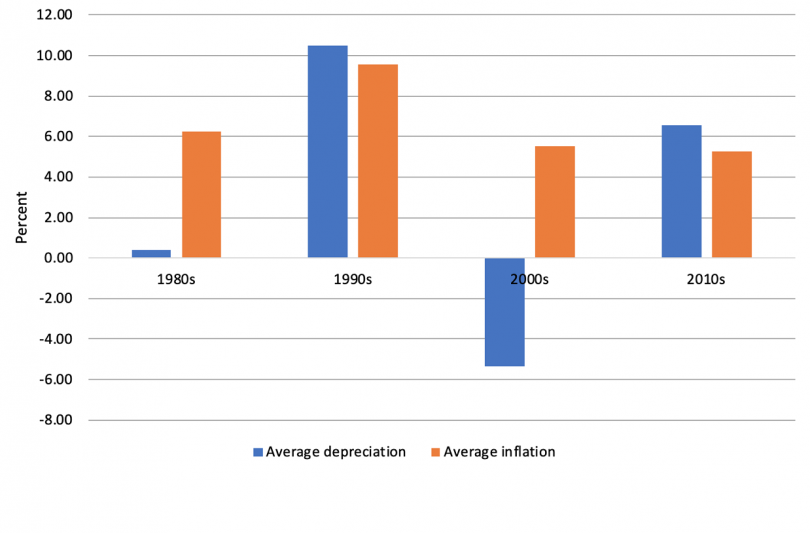 The Bank of PNG (BPNG) has been unwavering in its stance to limit the depreciation of the PNG kina, a policy adopted in 2014, citing concerns around imported inflation. Many commentators have argued that this policy has led to foreign reserve shortages and a lack of competitiveness in exports, and has kept local farmers poor. The latest estimate of the IMF is that the kina is overvalued by 11 to 18 percent. But is there merit to BPNG’s reasoning that depreciation of the kina will lead to high levels of inflation? To answer this question, it may be useful to look at history.

The graph below shows the annual rate of depreciation (PGK against USD) and inflation in PNG since the late 1970s.

Figure 1: Depreciation of PGK/USD vs inflation 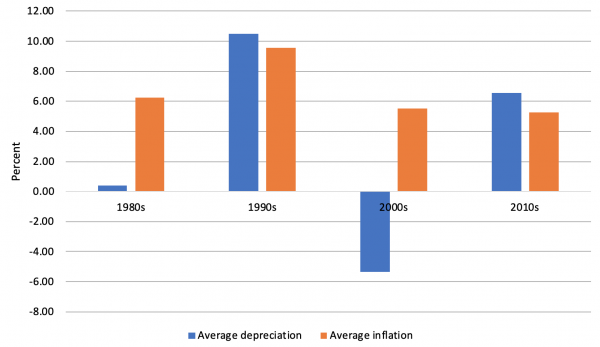 From independence to 1994, the PNG government pursued a fixed exchange rate regime known as the “hard kina” policy, meaning that, roughly speaking, the kina was fixed to the rate of the US dollar: as you can see there was almost no depreciation over this period. The rationale for the hard kina was to reduce inflation (which was often high in the 70s and 80s in Australia and other developed countries), and to reduce exchange rate volatility. The hard kina policy was relatively successful, as governments throughout the 1970s and 1980s operated largely prudent fiscal policies.

This changed in the early 1990s, when persistent government expenditure overruns and high borrowing, declining foreign aid as budget support, lower commodity prices, and the closure of the Bougainville copper mine led to an almost total depletion of foreign reserves in 1994. Foreign reserves fell to an all-time low of US$40 million, equivalent to two weeks of import cover. To address this crisis, the kina was floated in 1994, resulting in a sharp depreciation of the kina (reflecting how overvalued it had become). Inflation immediately increased from 2.8 percent in 1994 to 17.3 percent in 1995. Although inflation fluctuated throughout the 90s, the average rate was almost 10 percent. It is perhaps a fear of a repeat of the 1990s with its high inflation that constrains BPNG at the current time from allowing greater depreciation.

But if we look at the most recent history we see that inflation has again stabilised at a much lower level, around 5 per cent. This is true both during the commodity boom of the 2000s, when the kina started appreciating, and the subsequent slump, when the kina has lost value.

It is not that there is no link between depreciation and inflation. A study in 2006 found that the long-run pass-through of exchange rate to inflation was 50 to 60 percent. This means that for every 10 percent depreciation in the kina, inflation increases by 5 to 6 percentage points. However, there are clearly many factors other than changes in the value of the kina contributing to inflation, including the level of domestic demand, and foreign inflation.

What all this means is that while any depreciation will be likely to increase inflation, a policy of depreciation doesn’t have to mean a return to the high inflation of the 1990s. For one thing, given the backlog of USD orders, it is simply not possible to float the kina. Rather, the central bank needs to manage its fall. Second, the government needs to ensure fiscal stability, which was sadly lacking in the 1990s. In this scenario of a managed depreciation, there would likely be a moderate but manageable increase in inflation. The IMF, in its most recent assessment, concluded that “assuming a gradual adjustment in the kina to eliminate overvaluation, inflation is expected to pick up temporarily to 6.3 percent between 2020 to 2022.” Six percent is about the annual average inflation rate for PNG for the post-independence period (excluding the 1990s) and a level that the country can live with.

The sources for the graphs are: IMF Financial Statistics, BPNG QEB statistical tables and Weiss & Kauzi (2007), Money and Banking in PNG, BPNG and MUP.