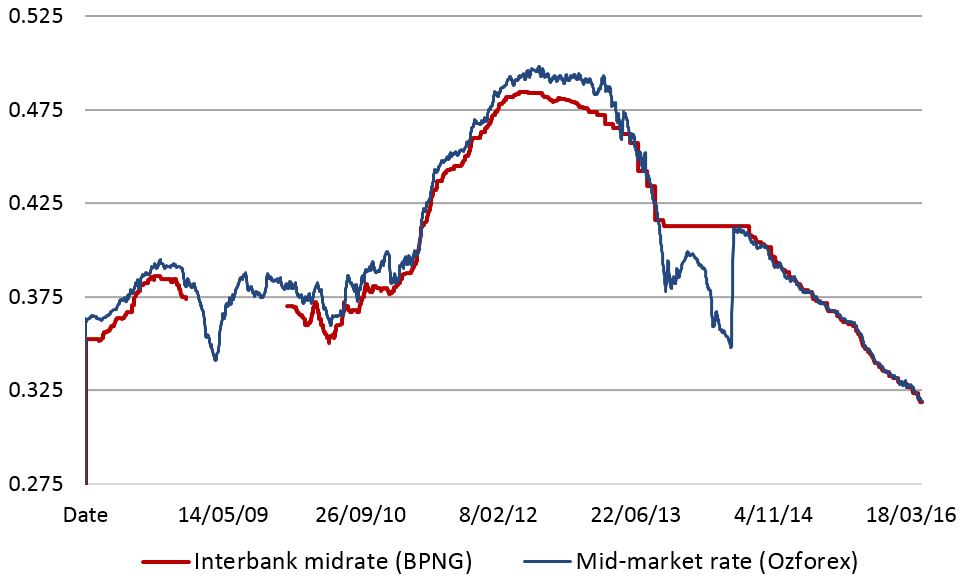 Papua New Guinea has neither a purely floating currency, nor does it have a purely fixed currency. However, the institution of trading bands in June 2014 has led to less flexibility in the foreign exchange market. The graph below shows PNG’s transition from more a flexible regime to a less flexible one.

This is an interesting finding because it suggests continuity pre- and post-June 2014 (clearly between October 2013 and June 2014 the interbank rate lost its influence). What then is the nature of the change in the exchange rate regime before and after June 2014 when the trading bands were introduced?

One possibility is that before October 2013 the interbank rate was set by trades between PNG’s banks, including the central bank, whereas after October 2013 it has been set by fiat, by the Central Bank. This is consistent with the reduction in volatility in the interbank rate post October 2013. It is also consistent with the build-up over the last couple of years of excess demand for foreign exchange reserves. The backlog in foreign exchange orders is now said to total K3 billion.

If the interbank rate is now set by the Central Bank, this would make PNG’s exchange rate regime a crawling peg, which is what the IMF most recently classified PNG’s exchange regime as. A crawling peg regime is defined by the IMF to exist when an exchange rate remains within a margin of 2 per cent relative to a trend for six months or more. It is not considered to be a floating regime. Based on an analysis I conducted of the official exchange rate after the institution of trading bands, a linear trend line, which reduces the exchange rate by 0.014 cents per day, explains 99 per cent of the movement in the exchange rate, i.e., it is within a margin of less than 2 per cent relative to the trend. Hence the IMF classification.

We can speculate on the reasons for this change from a managed float to a crawling peg. Perhaps as per the official reason, it was trying to reduce bank profits on foreign exchange trading. Additionally, the central bank could also have been trying to smooth what it saw as a temporary decline in the value of the Kina. With large resource projects like the Wafi Golpu gold mine, Total LNG and Frieda River copper mine looking to begin construction, this seems credible.

Whatever the reason, once global commodity prices fell, the game changed entirely. It was at this point that the inflexibility of the interbank rate resulted in greater problems for access to foreign exchange.

It will not be possible to quickly reverse the change back from a crawling peg to a managed float. There are some who say that a floating exchange rate will not clear the backlog of outstanding exchange orders. I agree. However, a significantly lower exchange rate would have the effect of improving access to foreign exchange, through higher supply and lower demand for foreign exchange. How much further does the exchange rate have to fall? International experience is a useful guide, as the next post in this two-part series will show.

Rohan Fox is the Partnership Coordinator for the Crawford ANU – SBPP UPNG partnership, which is funded by the Australian aid program under the Pacific Leadership and Governance Precinct. This is the first post in a two-part series; find the second post here.