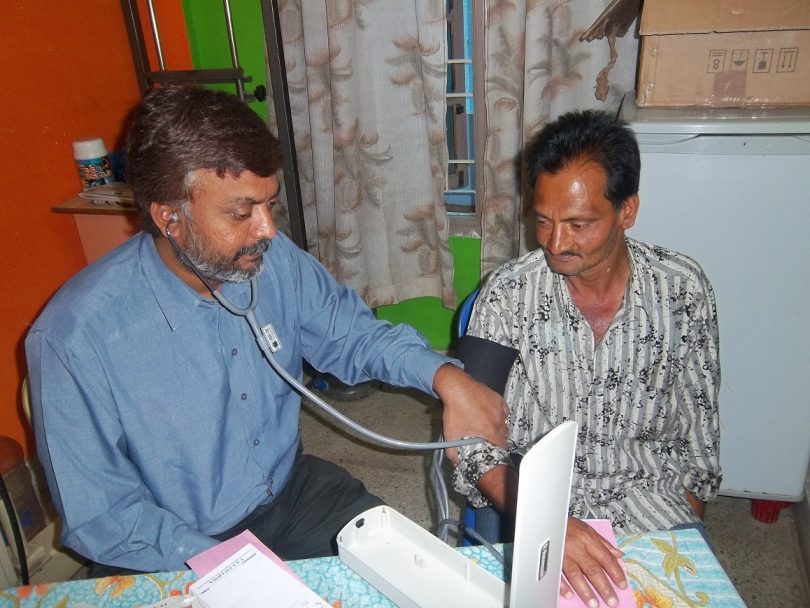 A patient getting a health screening as part of a diabetes program in Bangalore, India (Trinity Care Foundation/Flickr/CC BY-NC-ND 2.0)

Two excellent blog posts by Ian Anderson published on the Devpolicy Blog last week highlight the slow and uneven progress that countries in Asia and the Pacific are making towards preventing and controlling NCDs, as measured by the WHO NCD Progress Monitor 2017.

At the first UN high level meeting on NCD disease prevention and control in 2011, a series of ‘best buys’ were proposed to prevent NCDs, dominated by primary prevention measures: those that intervene in the processes of disease before it has started to develop, such as taxation and other measures that have been shown to reduce alcohol and tobacco consumption. They also included three specific secondary prevention measures that intervene in disease processes after initial risk factors and symptoms are present: multi-drug therapy for those with raised risk factors for heart attack and stroke; treatment of heart attacks with aspirin; and screening and treatment of pre-cancerous lesions to prevent cervical cancer.

Most countries are facing overwhelming challenges with understanding what actions are appropriate in their settings, how to implement the actions they have chosen and how to measure and evaluate implementation and outcomes. Primary prevention measures, especially those intervening ‘upstream’ (at the population rather than the individual level) as most of indicators 5-17 do, are generally the most cost-effective, although cost-effectiveness data are context specific, and for NCD interventions are significantly lacking for low and middle income countries, as the recently published Disease Control Priority volumes on cancer and cardiovascular, respiratory and related disorders attest.

However, as a response to the massive burden of NCDs that countries in the Asia-Pacific region are facing, the ‘best buys’ are quite inadequate. For example, the current ‘best-buys’ include no intervention whatsoever to respond to the population of people with type II diabetes and/or pre-diabetes, despite the staggering prevalence of those conditions. Failure to offer any response to the 138 million people who have already succumbed to the condition in the Western Pacific Region alone, more than 15% of the adult population in some countries, is unacceptable, given the dire health and economic consequences to not only individuals and their families, but the whole society. For example, a review including multiple studies in India found a median annual household out of pocket expenditure for diabetes of over $300 expressed at 2014 values, or about 20% of GDP per capita in that year.

The failure to manage the complications of diabetes and other chronic conditions imposes further costs on health systems and society more broadly, costs that can swamp health capacities and complicate cost-effectiveness assessments. In countries such as Australia and the USA, hospitals are inundated with patients suffering from diabetes complications; for example, 25% of hospital inpatients across 11 Melbourne hospitals suffered from diabetes. Conditions associated with hospitalisations range from kidney and heart disease to diabetic ulcers leading to amputations, as described in a range of New York hospitals. To the extent that the availability of such treatments as those for kidney and heart disease are more constrained, the associated health system costs might be lower in Asian and Pacific countries; but regardless, these chronic conditions and their co-morbidities are already starting to overwhelm hospitals and other health services that are seriously under-resourced.

To the extent that better management of NCDs can reduce the incidence of complications leading to hospitalisations, their cost-effectiveness outcomes might – like some of the upstream primary prevention interventions – also become ‘cost-saving’. In other words, such interventions have the potential to generate effectiveness in the form of disability adjusted life years, while also reducing total costs from both the household and health system perspectives.

Indicator 18 monitors the presence of evidence-based national guidelines, protocols or standards for the management of major NCDs at primary level. Indicator 19 aims to monitor provision of drug therapy, including glycaemic control and to prevent heart attacks and strokes, and counselling for those at high risk, emphasising the primary care level. Hence, one of the 19 indicators monitors individual access to some response to their emerging condition. Of the 26 countries in WHO’s Western Pacific Region that are included in the Progress Monitor, only six (Brunei Darussalam, the Cook Islands, Malaysia, New Zealand, Palau, and Korea) report full achievement of such access: three high income countries, two countries with a combined population of less than 40,000 people, and therefore only one middle income country (Malaysia) with a significant challenge to reach its population of 31 million. Three further countries (Fiji, Nauru and Tuvalu) with a combined population of less than one million partially achieve the target; the rest report not achieving the target (12 countries including China) or ‘don’t know’ (five countries).

This last category includes Australia, Japan and Singapore and highlights that even in such high-income countries, the infrastructure to monitor primary care activity is likely not present. Whatever response has been reported, it is likely that there is a high degree of uncertainty about the effective coverage of counselling and even basic management of the major NCDs. Consequently, there is a need for strategies to monitor an expanding range of secondary prevention interventions as part of primary care activity.

NCDs threaten a devastating impact on affected households, national health systems, and economies. In signing up to the UN resolution on NCDs and the Sustainable Development Goals, countries have made ambitious commitments to tackle them, but they still need considerable support from the international community to develop evidence-based NCD plans and strategies, ensure effective implementation, and scale up responses across populations and the whole of the health system. They also need significant support in developing monitoring plans, starting with integrated data collection systems, and continuing through analysis and implementation and policy responses. Without a quantum leap in this support, accountability for the commitments countries have entered into will be absent. Without that accountability, it is unlikely that significant progress will be made towards better health system response and outcomes. We hope to contribute to that leap. A recently designated WHO Collaborating Centre on Implementation Research for Prevention and Control of NCDs at the University of Melbourne is focusing on providing support and expertise to countries in order to achieve their NCD targets.

Barbara McPake is Director of the Nossal Institute for Global Health at the University of Melbourne. She is a health economist specialising in health policy and health systems research. Barbara has extensive research degree supervision and other postgraduate teaching experience and extensive international experience in health systems research and policy analysis and advice to UN agencies and low and middle income country governments.

Brian Oldenburg is Professor of Non-Communicable Disease Control in the School of Population and Global Health, University of Melbourne and Head of the recently designated WHO Collaborating Centre of Implementation Research for Prevention & Control of NCDs. He researches health policy, global health and the prevention and control of diabetes, heart disease and co-morbid mental health conditions in both HIC and LMIC.