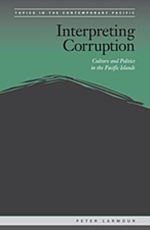 “I have watched the euphoria of independence throughout the Pacific degenerate after ten years into political corruption, and how our people become involved in that. Our new leadership, our new elite – of which I am a member, I am sorry to say – is carrying out a form of colonialism which may even be worse than what we got rid of” (Samoan Novelist, Albert Wendt 1993).

Peter Larmour’s recent release through University of Hawai’i Press, Interpreting Corruption: Culture and Politics in the Pacific Islands is an accessible work providing valuable insights into corruption and the cultural and political factors surrounding it. The book’s relevance is well demonstrated in the current context of frequently reported corruption concerns in the PNG elections. Drawing on a variety of sources which include media coverage, studies conducted by NGO’s, literary works and the research of an array of experts from different academic disciplines, the book is brimming with both short, entertaining anecdotes and in-depth examples of corruption throughout the region. Larmour manages to take a subject that could be treated blandly and share it in an interesting and engaging way.

The book draws heavily on data gleaned from ‘National Integrity System’ reports conducted by Transparency International (TI), of which the author is a member. Despite this involvement, Larmour’s critical analysis of TI’s work is fair. For example, he acknowledges the risks of over-simplifying issues of corruption for public consumption, which may be a temptation with TI’s Corruption Perceptions Index (CPI). Larmour’s self-proclaimed ‘interpretative approach’ to public policy focuses on shedding light on differing contexts and acknowledging the grey areas, as opposed to providing simplistic explanations or general lists.

Larmour underscores the importance of addressing corruption, likening it to a cancer – as this piece does – but he also illustrates the difficulties associated with its treatment: defining corruption is a task fraught with challenges. A common legal definition of corruption in the West is, ‘the use of public office for private gain’ but in the Pacific there are often not even exact translations for the word ‘corruption’ itself. We learn that in Tongan the nearest word is ‘angakovi’ (of bad character, badly behaved, unkind) and in Cook Islands they use the word ‘keikeia’ (thief), noting that the difference between sharing resources and thievery is sometimes blurred. But the definition of corruption matters, especially in the legal sense. Larmour offers figures suggesting that the Fijian Independent Commission Against Corruption rejected 78% to 85% of complaints because they did not meet their official definition of corruption.

Larmour’s exploration of the cultural links to corruption is particularly interesting. His examination of ‘gift giving’ throughout the region demonstrate the fine line between cultural practices and the presence of corruption. We see that while it is possible to see a culture of gift giving as a cause of corruption, others view gift giving as merely a convenient vehicle used for the practice of it. While TI has taken a stand against culture being used as an excuse for corruption, in practice it has to ‘defer to claims of national difference’.

Culture also ties in with perceptions of the state and politics in the Pacific in the sense that systems of the state are relatively new and culturally foreign. It is suggested that in Melanesia, for example, large faceless government bureaucracies have no more appeal than large corporate logging companies. Larmour cites similar feelings expressed by Dame Carol Kidu:

“Because aspects of the bureaucratic machinery are dysfunctional, people who should be going to the bureaucracy instead go to the politician for water, roads, clinics, school fees and endless needs that should be seen as MPs functions”.

Culture is also found to be a factor in determining how likely a person is to prioritise either ‘integrity’ or ‘intimacy’ when interacting with their political representatives. This goes a long way to explaining how politicians known to have been corrupt in the past can be voted in time and again. Larmour concludes that ideas of the nation and the state are out of step with each other in the Pacific and he makes a poignant assertion worthy of acknowledgement by development partners, that:

“Discussion of corruption in the Pacific, by analysts and aid donors, has been preoccupied with the image of the Weberian state, aloof from society and dealing impartially and impersonally with its citizens”.

Another major issue navigated in the book is populism and the its political manipulation. Surveys in Fiji and Solomon Islands show large portions of the population as being suspicious of corruption in government, allowing politicians to use the ‘gut feelings’ of their constituents in opportunistic ways – anti-corruption campaigns – to garner popular support. Larmour argues that this ‘is why coup leaders turn to them, in the absence of the legitimacy provided by popular election or international support. They “work” politically.’ But as the clean-up campaign in Fiji showed, such activities may score badly on other criteria, including effectiveness and fairness. Another danger is that continuous anti-corruption discourse can act not only to discredit leaders, but displace essential debate on other policy issues and foment disillusionment with democracy itself.

In seeking answers, Larmour demonstrates that there are many possible responses to each question raised. Where a person leans will vary depending on their country, village, socio-economic standing, academic or professional background, connection or involvement with corruption, changing public and popular attitudes and so on. The book provokes feelings well known to policymakers, that ‘every situation is different’ and, ‘where you stand depends on where you sit’. So anyone hoping to read this book and gain simple and definitive answers is likely to be disappointed. However, this book is a must read for those with an interest in topics related to corruption, culture or politics and particularly for development partners, especially donors in the region, hoping to gain valuable insights and a more nuanced understanding of such matters.

This is an edited version of a post originally published on the Pacific Institute of Public Policy’s blog, available here.

Toby Ley is a Research Associate at the Pacific Institute of Public Policy.

Toby Ley is a Research Associate at the Pacific Institute of Public Policy.