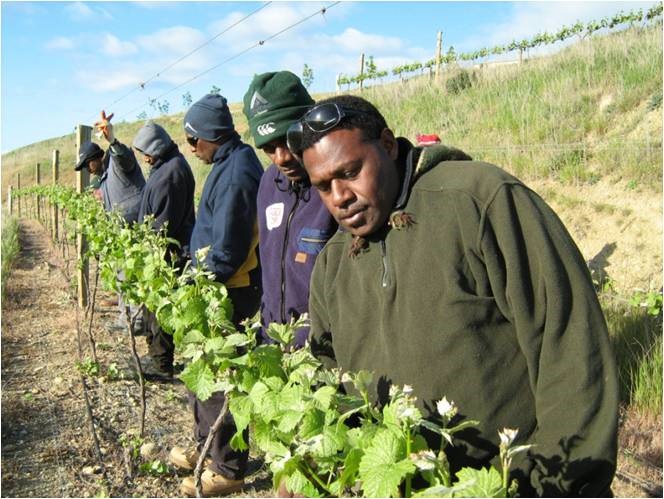 Some of the research participants at work (Credit: Rochelle-Lee Bailey)

As part of a longitudinal study, I followed the lives of these seasonal workers, their employers, their families, and their communities, whether they continued in the scheme or not. I am still in contact with 20 of them.

Where are they now?

Nine of the workers are currently working in New Zealand; eight as RSE workers and one with a two-year “talent visa” through his employer, which enables his family to live with him in New Zealand. He is not the only RSE worker that has been given this opportunity. Interestingly, when the RSE visa was established, it was made clear that it would not be a pathway to other immigration visas (and this is still the official position). Of the other 11 men, after seven seasons of the RSE, one is now working in Australia’s Seasonal Worker Programme (SWP) and the remaining ten are in Vanuatu.

Various reasons were given for leaving the RSE. Five of the men were stood down on the blacklisting system. Any misconduct of workers’ working and living regulations are reported by employers and team leaders to the Vanuatu Employment Services Unit (ESU). Being blacklisted prevents workers from returning for two to five years, or indefinitely, depending on the offense. Others did not earn as much as in earlier seasons (specifically, 2009-2010 was a lower-earning season, due to weather conditions). A number of men said they needed ‘a rest to spend time with their families’.

Seven of ten men in Vanuatu said they either wished to return to the RSE or apply for the SWP, to earn money for school fees. Nonetheless, once removed from seasonal worker programs, it is difficult to return, unless arranged with an employer.

Workers stated that without participation in the RSE many of their goals would not have been realised, especially in terms of educating their children.

Within weeks of participating in the RSE in 2007, many of the workers began small business trading with each other, despite the fact that not one of these workers had studied past grade six. 14 workers said they had used some of their funds to start a business. The range of businesses demonstrates entrepreneurial audacity. Popular businesses initiated by participants ranged from accommodation, bakeries, and cattle ranching, to stores, tourism ventures and transportation (buses, taxis, tour guides and trucks).

Not all the ventures succeeded and some are still reliant on continued funding from participation in the RSE, especially businesses which require ongoing loan repayments.  Much of the lack of success of previous business initiatives are associated with the business environments and restrictions that workers feel they have at home. Workers especially highlighted social obligations and requirements that do not necessarily fit within orthodox business practices.

Table 1 shows the various ways that workers have used their earnings over this ten-year period. It is similar to what I found when I first talked to the workers in 2007. Contributions to kastom ceremonies remain central, as exchange is a central part of ni-Vanuatu relationships. The transactions that ni-Vanuatu make with each other have consequences for wider economic and social relations. These also create safety nets for workers once their time in seasonal programs has finished. 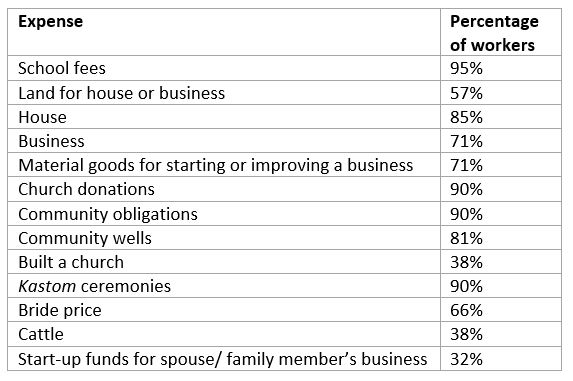 Workers continue to participate in the RSE due to the ongoing benefits that motivated them initially. School fees continue to be a priority, and earnings from seasonal workers programs have enabled children to complete secondary schooling and further themselves in tertiary education. Many see their work in New Zealand as their career, and none of the ten-year veterans of the scheme have any intention of stopping within the next five years. This contradicts the information provided in their second round of interviews in 2008, where most workers had planned to only work for two or three seasons.  The RSE may be called a temporary labour scheme, but for many workers – who work for the same employer for seven months per year for ten years – their participation hardly seems temporary.

Many of these stories will be explored in the author’s upcoming RSE ten-year anniversary paper.