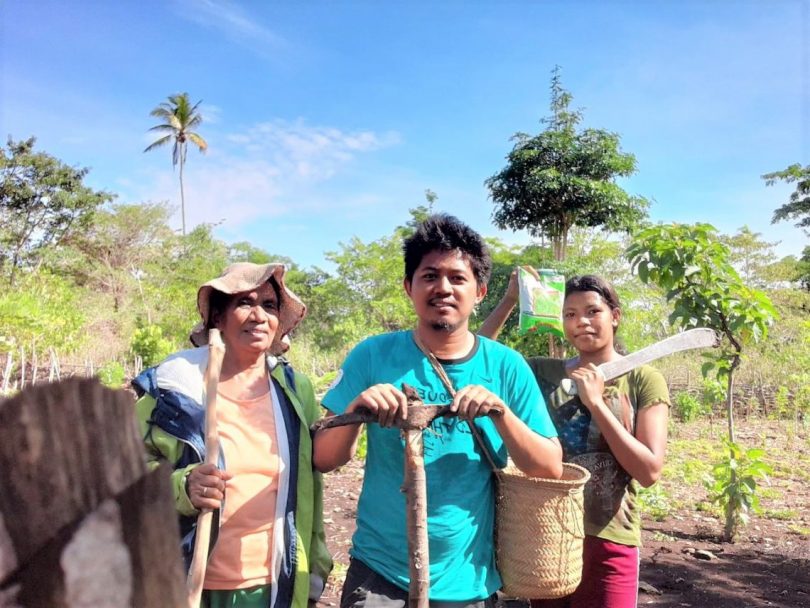 Akito and his family in Poros, Timor-Leste

Timor-Leste is an agricultural nation. At least 70% of the population relies on some sort of farming to survive and virtually everyone has relatives that live on some type of farm. According to the National Strategic Plan, the sector is supposed to be a national priority but in reality, despite it being what most people rely on for their livelihoods, it has never attracted more than a small fraction of the state budget. Last year it was around 2%.

Life in rural areas is generally very tough. Although there are structural reasons for this, including Timor’s rugged terrain and unreliable rains, lingering social and physical damage from conflict, a lack of education about nutrition, and a preference for traditional agricultural techniques, the government’s persistent lack of interest in this sector really doesn’t help. The agricultural officers (known as exstensionista) that the government employs to try to ensure communities have access to seeds and modern farming techniques are under-resourced and too few. Rural infrastructure – village roads, irrigation works and the like – are also not enough and often poorly built.

Like most Timorese I (Akit0) have an agricultural background myself. I was born and raised in a community of farmers and fishermen in the village of Poros in Lautem District. Our village, like most villages in Timor, was very poor. The extensionista didn’t go there when I was a child and still don’t.

I was the youngest of four. Our house was built out of clay, rock and palm leaves, although eventually we were able to save up and get a tin roof. I never knew my father. He was a FALINTIL guerilla who lived in the jungle most of the time. He was killed in combat around the time was I born. Even with the help of family and the community, it was very difficult with my mother supporting us all, especially considering that one of my older sisters was born partially blind. Even by Timorese standards it was a difficult time to grow up. Many of our houses and the school were burnt down in 1999. When I came to the first day of classes in 2000 they actually turned me away – I was so small and skinny they didn’t believe I was old enough.

Despite this, as a child I wasn’t really aware of how poor we were, and between school and helping out on the farm and playing with my siblings and friends, life wasn’t so bad. We had food, usually (sometimes it could run low in the period before the harvest). We would catch fish and grow sweet potato, vegetables and maize. Our methods were old fashioned, a type of farming sometimes called ‘slash and burn’ (Fatuluku: pala sapire). Each year during the dry season, we would select a patch of forest to make a garden. We would then prepare it by chopping the branches off the trees, using some of the wood to make a fence to keep out cows and pigs. Then, after it had all dried out, we would set it on fire, planting our seeds in the ashes after the rain arrived.

Despite how poor my family was in some ways I’m still very lucky. Mum would spend the weekends at the market selling ground-up coconut and homegrown tobacco, and earned just enough to buy the books and things we needed to go to school. Grandpa, although he had never been to school himself and had very little money, also tried to help us whenever he had something to give. A Timorese guy who spoke some English used to volunteer at the school and sparked my interest in English which has continued to do me well to this day.

Given how difficult life is in rural parts of Timor, it’s not surprising that almost everyone I grew up with left the village at the first chance they had. At first many went to Dili to look for work or education, but life is expensive there, and there are very few paying jobs to be had. I myself did a degree in electrical engineering at the national university, but like so many others, I found that no one was interested in my qualifications. In the end I was lucky and was able to find a job with an NGO, but many people like me have used their Portuguese passports to go work in the United Kingdom. More recently a few have also gone to South Korea, and now Australia.

The money that is being sent back is changing things in my village. For the first time there are big houses, and, although the old people still tend their gardens, they no longer have to do it to survive like they did when I was a child. A bag of rice is much easier to find than it once was. Some people have bought trucks which are a useful way of making some extra money by moving stuff around. A lot of people are paying for their brother and sisters to go to school or university in Dili, or Indonesia, or even Portugal. When I was a child, my village was an isolated place, now people are far more educated and worldly.

Young people who grew up in rural Timor know what it is to be poor, hungry and bored. They want an easier and more exciting future that they see other people have. Until the government makes investing in our agricultural sector a priority the farming life will continue to be associated with poverty and Timor-Leste’s villages will continue to empty. While it is natural that Dili will continue to grow as Timor-Leste develops, our villages are the soul of Timor-Leste. Not only are they key to our food security, they are also home to many of our parents and the spirits of our ancestors. They must not be forgotten.

Akito Ximenes authored this post with support from Michael Rose.

Akito Ximenes is originally from Lautem in Timor-Leste. He has a degree in electronic engineering and has worked as a communications officer for The Asia Foundation in Timor-Leste. In March 2021 he began a year-long position as a research assistant working with the Australian National University on a project looking at life and labour sending in his home village.