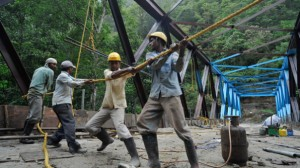 The United Kingdom recently made a surprise announcement to join the China-led Asian Infrastructure Investment Bank (AIIB). How could the UK cooperate with the AIIB to help address the staggering $8 trillion shortfall in infrastructure investment facing developing countries in Asia?

Questions surrounding the AIIB have dominated international infrastructure development discourse since late 2014, when 21 Asian nations signed on to the China-led initiative. Most recently, the AIIB debate dominated geopolitical news in March 2015 when the UK agreed to join China’s initiative, despite clear opposition from the United States.

Much of the AIIB debate has centred on transparency: namely concerns that the AIIB will have an opaque governance structure that will support Chinese business or political interests. In light of this focus among AIIB partners (and opponents), Chinese officials have stated clearly their intention for the AIIB to meet best practice in transparency and accountability.

Enter the UK, with its track record in international infrastructure procurement transparency. For example, the UK currently supports the Construction Sector Transparency Initiative (CoST). CoST is the leading organisation in this space, whose work in Asia and elsewhere demonstrates that:

[For the investor, transparency] curbs mismanagement, waste, and corruption and reduces risks to public safety from poor building practices. [For the recipient government, it] improves fairness in competition for contracts and can also increase the flow of foreign direct investment and development finance into a country’s construction sector.

The AIIB seeks to address the significant infrastructure spending deficit in Asia. However, one cannot simply ‘throw money’ at infrastructure development and expect results. There is a limit to the absorptive capacity of developing country governments; many governments’ ministries, departments, and agencies struggle with their existing workload in key functions such as planning or procurement. Further, most governments will require support to improve the enabling environment for infrastructure development, such as legal or regulatory reform or macroeconomic management.

Upstream reform offers some scope for collaboration strategy with DFID or through other multilateral financial institutions (MFIs) where the UK has a strong voice. One mode of collaboration would be for the UK to provide a minority share of the financing for these investments, but retain an influence on the upstream work. This approach would enable the UK to continue advancing programmes of sound fiscal policy, institutional development, and good governance. Indeed, even the United States has conceded that co-financing along such lines would support the delivery of high-quality infrastructure.

A potential ‘wild card’ in working with the AIIB in upstream technical assistance is that of ‘buy-in’. Fundamentally, programmes of infrastructure reform have winners and losers; and losers often include entrenched political interests who battle against change. As such, a major focus of most upstream technical assistance projects is building buy-in for the difficult reforms among key decision makers. Building buy-in is a slow and challenging process.

Analysts argue China operates in a different political space from ‘Western’ donors, with a different degree of credibility among most Asian governments. If it were possible to leverage China’s credibility and improve buy-in for upstream-enabling environment reform in support of AIIB projects, an AIIB-MFI partnership could deliver significant results.

Downstream collaboration may be more immediate. Fundamentally, the AIIB will fund projects; as such it can only be as effective as the projects in its pipeline. As noted in a March 2015 DFID review, the lack of effective ‘early stage project preparation’ is a barrier to mobilising infrastructure finance in Asia (and elsewhere). Simply put, there may not be enough ‘good’ projects in which the AIIB can invest.

DFID and a number of bilateral donors have a strong track record in early stage project preparation facilities, which identify, scope, and conduct ‘pre-feasibility’ analysis on projects. Partnership with those facilities would help the AIIB find ‘good’ projects to fund. (Adam Smith International manages DFID funded project preparation facilities in Africa, such as the award-winning Climate Resilient Infrastructure Development Facility in southern Africa.) In fact, cooperation from the early stages will ensure that projects are prepared in a way that meet the Bank’s standards and can pass through due diligence and other administrative requirements efficiently.

There are clear benefits for the UK in such a partnership. For most project preparation facilities, capital is a major limitation for project implementation: linking them with the AIIB will facilitate better access to capital. Further, a collaborative effort with the AIIB to guide early project preparation would enable donors to ensure cross cutting issues such as gender, climate resilience, environmental impact and poverty reduction are prioritised. In a sense, partnership on project preparation would enable DFID and others to help ‘set the agenda’; while access to AIIB capital would ensure benefits are realised.

A final area for collaboration is on the ‘business culture’ of the AIIB. Each development institution has a distinct culture, rooted in its governance and operationalised in the details of organisational design such as human resources, management information systems, and internal and external communications.

Organisational culture and design have an impact on delivery. The recent review of ‘How DFID Learns’ [pdf] demonstrates that internal processes on knowledge management can influence decision making and development impact. The World Bank is in the midst of an internal reform effort that recognises the impact internal structures have had on effectiveness. (The World Bank’s recent experience also demonstrates the difficulty in changing culture and design once set).

Consider something as simple as the language of business: the AIIB may very well produce the required legal and project documents for due diligence review in Mandarin (and not English). Such an approach would inhibit corporate collaboration with most other development organisations. AIIB’s language requirements for staff positions will be important as much will depend on the background, educational training, and experience of each individual involved in the collaboration from both sides.

The AIIB’s business culture will be rooted in a number of organisational development decisions, which are likely to be made very early on. There is an opportunity for the UK and others to contribute ‘lessons learned’ towards the design of the AIIB. The Chinese recognise that development practitioners from the World Bank and elsewhere can contribute to the organisation design (and indeed count ex-World Bank staffers among early recruits): development practitioners should seize this opportunity.

Clearly the opportunities listed above will need to be revisited when the details of the Bank’s structure are expected to take shape in June (and possibly again at the end of the year when they must be ratified). But that there are significant opportunities for collaboration and influence is already clear. They should be seized.

Elliott Cappell is a Principal Manager in Adam Smith International’s Infrastructure and Climate Change team. Elliott has delivered infrastructure project preparation facilities for DFID including the award-wining Climate Resilient Infrastructure Development Facility; he has experience with a range of donors including the World Bank, UNDP, USAID, and CIDA in Africa, Asia, and Latin America.