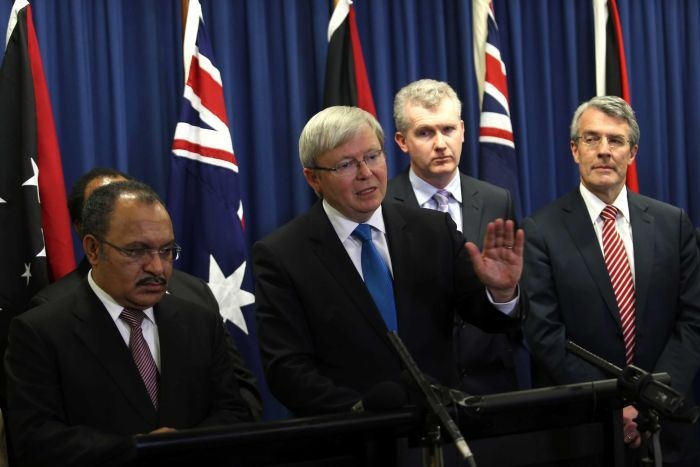 The media has been preoccupied in recent days with the question whether asylum seekers sent to PNG and Nauru under regional processing arrangements will, as advertised, be resettled in those countries if determined to be refugees.

That’s not the most pressing question.

While it suits the government’s deterrence objective to talk in terms of resettlement in PNG and Nauru, we can’t be sure how much local resettlement will actually take place. It is quite clear that the governments of PNG and Nauru do not envisage permanently resettling significant numbers of refugees within their borders. They have said as much, here and here.

The real unknown is whether, or rather to what extent, asylum seekers will be parked in community-based accommodation in PNG and Nauru, either while awaiting determination of their status or pending transfer to another country for resettlement.

The regional processing MoUs previously in effect with PNG and Nauru said that refugees would be transferred out of PNG and Nauru to other countries for resettlement ‘within as short a time as is reasonably necessary’, subject to a suitable delay consistent with ‘the need to ensure, so far as is possible, that no benefit is gained through circumventing regular migration arrangements’.

The government signed updated versions of both MoUs just before going into caretaker mode. The text of the new PNG MoU is here and that of the new Nauru MoU here. Almost the only material difference between the new and the old MoUs is that the new ones include provisions relating to local resettlement and community detention. Paragraphs 12 (PNG) and 11 (Nauru) contain language on community detention; paragraphs 13 (PNG) and 12 (Nauru), language on local resettlement.

We know that PNG and Nauru have limited capacity to process protection claims and that it will take time for this capacity to be strengthened with Australian aid. We know that the Australian government is in no hurry, as a matter of policy, to see asylum seekers’ claims processed. This means it might be up to a few years before the average asylum seeker’s protection claim is processed. Thus resettlement is a very distant prospect.

What is a much more present option is community detention for people awaiting determination of their refugee status. As can be surmised from a reading of Box 2 on page 40 of the August Budget Statement, and as has now been confirmed in the text of the new Nauru and PNG MoUs, community detention is on the table. It is articulated in both MoUs as a policy the two host governments might implement, whereas processing centres are presented as something on which they have already agreed.

It isn’t clear when community detention might begin to be practised—perhaps when processing centres are full, perhaps sooner. Nor is it clear to whom it might apply. Would it be limited to families with children, with a view to avoiding some of the risks they face in institutional detention? Or would it be applied more broadly, to people deemed not to present a flight risk, so as to reduce pressure on detention facilities?

Two things, however, are clear.

First, it seems the government is determined to sheet home the costs associated with supporting asylum seekers in community-based accommodation to the aid program, despite the high probability that meeting such costs will not constitute aid under OECD rules. The August Budget Statement has already allocated $236 million over four years for costs associated with ‘unauthorised maritime arrivals living in community based arrangements’ in PNG. For timing reasons alone, it is hard to believe that this relates only to people deemed to be refugees who consent to be resettled in PNG.

Second, placing asylum seekers in community-based accommodation is likely to lead to tensions and conflicts for precisely the reasons given by Solomon Islands Prime Minister Gordon Darcy Lilo when he yesterday announced Solomon Islands would not participate in regional processing arrangements. These are also the reasons why many in PNG and Nauru don’t support resettlement. Recent discussions about an ‘open-camp proposal’ in Nauru are indicative of likely community concerns. (Update, 8 August 2013: See also this in-depth piece by Jo Chandler on the experiences of Muslims in PNG.)

One way to avoid the possible adverse consequences of community detention would be to create artificial and isolated communities of asylum seekers—ghettos. However, these would be little more than informal detention facilities, and it would be unwise to assume that their informality would create an opening for the use of Australian aid to meet any associated costs.

The proposed placement of asylum seekers in community settings in PNG and Nauru, pending processing, raises much more immediate concerns than the distant prospect of resettlement. Both the social and the aid implications of this course of action need a lot more consideration than they are currently getting. In particular, the two host governments should clarify their policies on community detention.