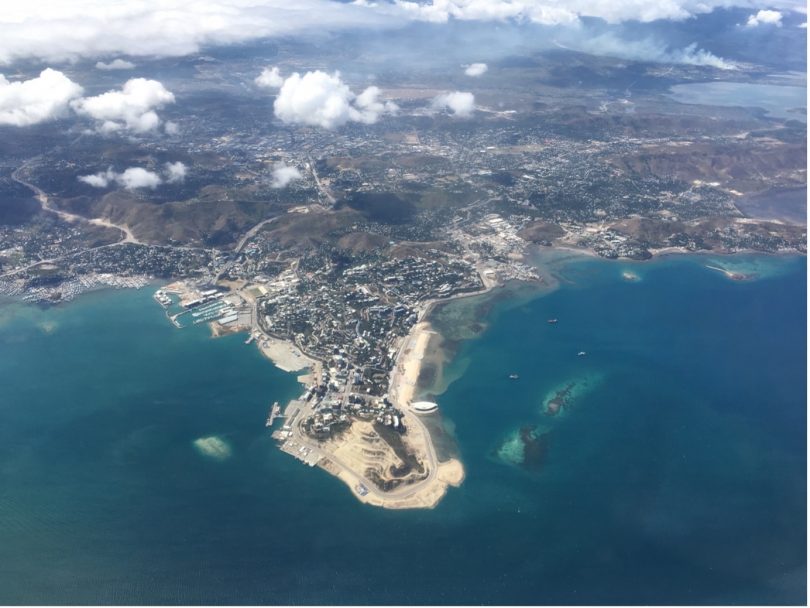 Over the last decade – from 2012 to 2021 – the media have reported many evictions of people from informal settlements in Port Moresby, Papua New Guinea (PNG). The decade was marked by a sustained pattern of city-wide evictions that took place at the same time that leaders sought to rebrand and develop the National Capital District (NCD) as a cosmopolitan city in the region. The media coverage also highlights concerns among local leaders and commentators about the pattern of evictions, the lack of clear resettlement policies, the legal constitutional issues, and the confusing and threatening messages by policymakers related to evictions.

Housing nearly 50% of Port Moresby’s residents, informal settlements have been part of the historical and social fabric of the NCD and housing policies since the colonial period. Informal settlements have simultaneously received harsh treatment by state actors while also being largely accepted as an important option for housing many of the city’s residents (see here, and here pp. 126–128, for a discussion). Discursively, the city is often divided between those with formal rights to private or state-owned property and those living in informal settlements, and evictions and other repressive treatment of low-income residents of settlements reflect a form of state control.

In a city where land values have progressively increased, and where housing built to Western standards is prohibitively expensive for most people, forced evictions reinforce the marginalisation of residents of settlements, and deepen housing vulnerability. An assessment conducted by the United Nations Office of the High Commissioner for Human Rights (OHCHR) in 2010 noted that expensive housing in urban areas of PNG forced people to live in settlements, but that this reality is not reflected in national legislation to protect housing rights. Overall, the OHCHR report noted that there are limited mechanisms to support tenants and complaints related to housing. Generally, the courts are inaccessible and there is no clear legal framework to address evictions or housing complaints.

In the absence of reliable official data to provide an accurate picture of evictions that took place over this decade and the numbers of people involved, I carried out a study that examined media reports, court records and other publicly available documents, to gain some understanding about the extent and underlying dynamics of forceful evictions in Port Moresby between 2012 and 2021.

A cumulative mapping of these media reports over this decade gives a sense of the approximate locations of threats of evictions and actual evictions, and the media attention paid to these events (Figure 1; larger circles indicate more media reports mentioning that location). Some cases were the subject of multiple media stories, for various reasons. For example, some were the subject of ongoing court cases, while others involved public controversy with different perspectives being reported.

Figure 1: Cumulative number of media eviction stories (May 2012 to December 2020) 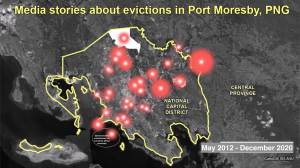 The media coverage indicates that evictions were an important public concern in Port Moresby during the decade. Media reports covered eviction threats (white dots in Figure 2) as well as actual evictions (red dots in Figure 2), across various locations throughout the city. 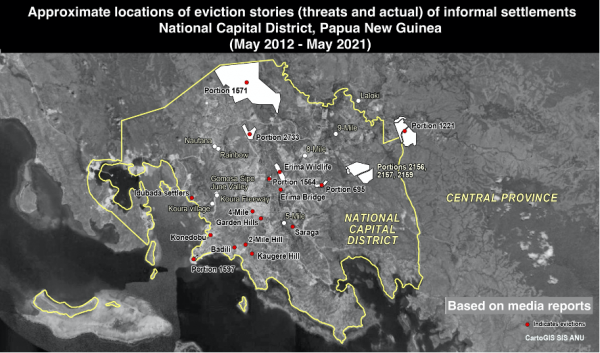 The number of people evicted during this period can be estimated from the media reports that provide details of people or households impacted. Between 2012 and 2021, an estimated 18,791 Papua New Guineans residing in informal settlements in Port Moresby were reportedly forcefully evicted from their homes (Figure 3). Many were long-term residents, some of whom had lived in these communities for more than 30 years.

Figure 3: Estimated number of people reportedly forcefully evicted (May 2012 to May 2021) 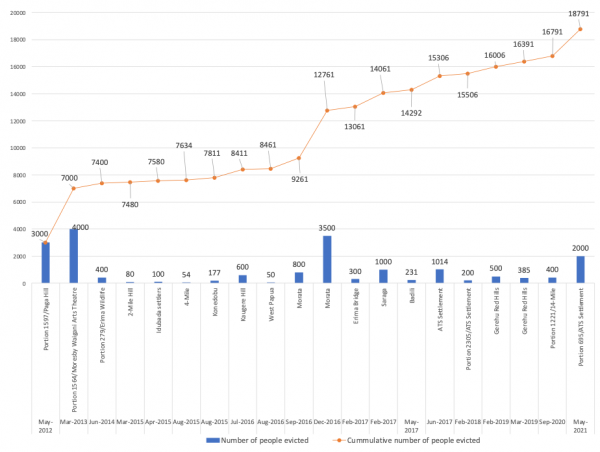 According to the National Capital District Commission Urban Development Plan, Port Moresby towards 2030, a substantial area of Port Moresby is referred to as state-owned land (see map on p. 35). This is land that was alienated from customary landowners during the colonial period and is now governed under PNG’s Torrens system of land management, where land is registered to individual title holders. Based on the media reports examined in this study, several of the mass evictions involved relatively large portions of this state land. Again, without official data to give a clearer picture, the available information in the NCDC Urban Development Plan, the media reports, and available court decisions indicate that most of the estimated 18,791 people who were evicted had been occupying state land.

A number of these evictions involving state land were the subject of lengthy court cases. An analysis of the court decisions and other documents related to seven selected cases found that the PNG court focused on determining the legal property rights over the land in question, and court decisions tended to favour the legally registered owner of the title. By contrast, limited attention was given to customary landowners, or to ensuring that the human rights of communities impacted by evictions were protected.

Without reliable official data, my study of media reports of eviction stories between 2012 and 2021 provides some evidence of the extent of evictions in Port Moresby during this decade. My paper notes that policies are needed to protect the rights of customary landowners in urban areas. As the city grows, a dialogue mechanism between NCD and the neighbouring Central Province is needed to produce sound policies in relation to evictions. My paper highlights that a better understanding of forced evictions may contribute insights to support future policymaking processes. The findings of my study also suggest the need for legislative reforms, and greater clarity on the roles and responsibilities of state actors to protect human rights. An independent monitoring mechanism is needed to help ensure that human rights are protected in eviction processes.