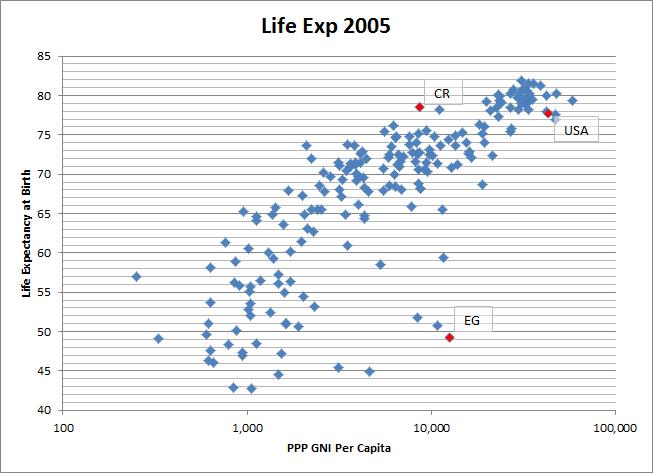 And yet in parts of the New Zealand development community the change in mandate was seen as major mistake.

Was the change a positive one for the New Zealand aid programme? And, more generally, should aid agencies focus on economic development? In my next two blog posts I will try and answer these questions. I’ll do this in two parts. GDP/capita is hardly an end of its own, so today I’ll investigate whether economic development brings benefits in areas that really matter, focusing on health and poverty.

Then next week I’ll examine whether aid is an effective tool for bringing about economic development. I’ll do this is because, even if economic development is a worthwhile objective, there’s still not much point focusing aid on it unless aid actually brings it about.

As a sufferer of a chronic illness I can say from experience that good health is an important element of a meaningful and happy life (my beliefs here are confirmed by survey evidence showing health to be a central aspect of reported life satisfaction). So if economic development can be shown to bring good health, this would be a significant mark in its favour.

In the chart below I’ve plotted (using 2005 data from the World Bank World Development Indicators) PPP adjusted GNI per capita (an indicator of level of economic development — on a log scale on the X axis) and life expectancy at birth (a proxy for health outcomes more generally — on the Y axis). Each dot on the chart represents a country.

Visible in the graph is a strong association between economic development and life expectancy. This association itself isn’t proof that higher GNI causes higher life expectancy (the causal link may, and indeed probably does, in part run in the opposite direction) but the general consensus among development economists is that economic development does lead to better health. Or as Spence and Lewis put it [pdf]: ““We can say with confidence that economic growth improves health.”

The relationship becomes weaker as countries become wealthier (remember the X axis is log scale). Also there’s a lot of variance around the line – as is illustrated by the countries in red. Equatorial Guinea (EG) is wealthier than Costa Rica (CR) yet its life expectancy is 30 years lower. Likewise, the USA is substantially wealthier than Costa Rica, yet its life expectancy is actually slightly lower too. Wealth may lead to health on average but there is a lot of space around that average. Which means that, up to a point, there is a lot that can be done to improve health even in countries with low levels of economic development.

Very few people would argue that development work shouldn’t ultimately aim to reduce poverty. Not only is poverty associated worse welfare but living in poverty dramatically reduces opportunity too.

The chart below comes from the Art Kraay paper, ‘When is Growth Pro-Poor?’ Each point on the chart represents a country (over a particular period of years), the X axis shows the country’s rate of economic growth and the Y axis shows the change in poverty levels for the country. 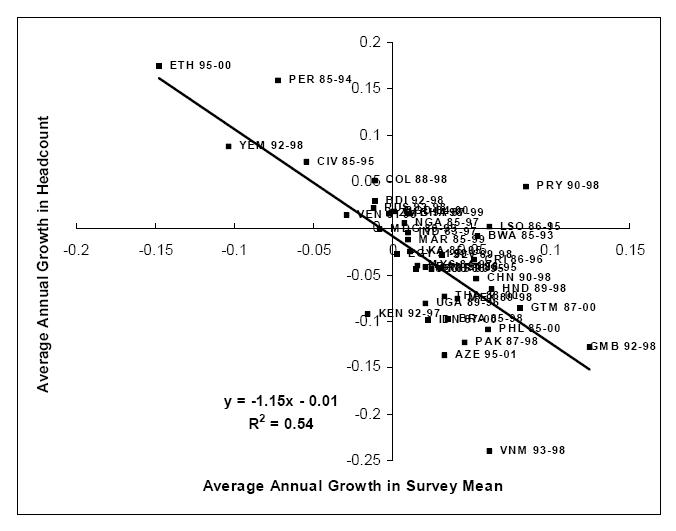 What Does This All Mean?

Next week I’ll look at the relationship between aid and economic development.

[Update: you can now read the second part of my attempt to answer the aid and economic development question here.]