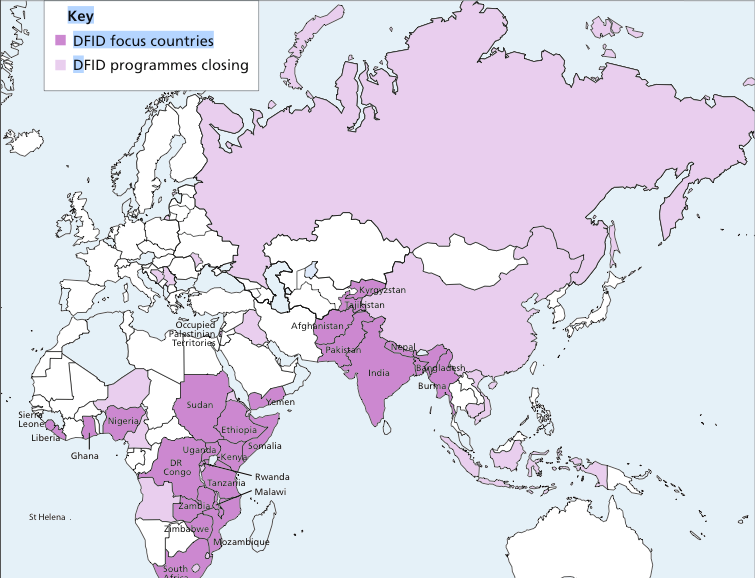 Last week the UK’s International Development Secretary Andrew Mitchell announced the key outcomes of two aid reviews and set out the results that UK aid will deliver for the world’s poorest people over the next four years. What are the lessons from the UK aid reviews?

The UK’s International Development Secretary, a cabinet-level position, provides strategic direction and oversight to the aid program, including leadership for the aid reviews. Moreover, he and the aid program enjoy support at the highest levels of government.  In the foreword to a summary of the reviews–UK aid: Changing lives, delivering results–the Prime Minister David Cameron and Deputy Prime Minister Nick Clegg said:

When this Coalition was formed, we made a commitment that even in these difficult economic times we would keep our promises and increase aid to help the world’s poorest people. We are proud to stand by that commitment.

Combating poverty, disaster and conflict is in the best traditions of our country. Whether it was the campaign to abolish slavery in the 19th century, the fight against fascism in the 20th century, or campaigns like Live 8 and Make Poverty History in the 21st, the UK has a proud history of showing compassion to those who are suffering beyond our borders. 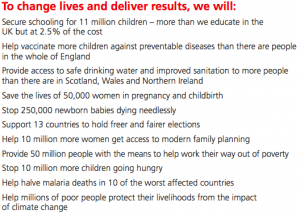 In order to translate the bold rhetoric and strong political support into action, the International Development Secretary (and his department) has an unapologetic focus on results and hard-nosed approach to aid effectiveness.

At the core of the report are a clear set of objectives that the UK aid program will deliver–summarized opposite. The objectives include securing schooling for 11 million children, vaccinating more that 50 million children against preventable diseases and stopping 250,000 newborn babies dying needlessly.

It is possible to get caught in debates on the stated of goals of aid–with some favouring poverty versus national interest objectives–so a sharp set of results-based objectives is a refreshing alternative, allows more precise nuance and communicates to both the public and aid agencies what the aid program expects to deliver.

3. Focus on results and girls

The UK’s results focus is not surprising and as been a mantra for some time now, and for any donor looking to improve value for money, DFID is a good case study to consider–for a good primer click here.

The UK plans to concentrate aid on countries where it can have a big impact.

The Bilateral Aid Review considered DFID’s top-down allocation process–that was similar to the World Bank’s IDA allocation model and focused on money–and has moved to what DFID describes a ‘value for money driven, bottom-up scrutiny of what results we can achieve through each country programme.’

In short, each country program made bids about what results could be delivered and this helped DFID make choices about which programs to fund, as well as provide better information on the aggregate impact of country programs and their relative contributions.

Fragmentation is a recognized problem problem for aid effectiveness, as is the knowledge burden placed on aid agencies operating in many countries and sectors.

It’s not a politically easy problem to address, and the UK has commendably made some tough choices, based on rigorous analysis, of where to focus its bilateral aid program. Bilateral programs in the following countries will come to an end: Angola, Bosnia and Herzegovina, Burundi, Cameroon, Cambodia, China, Gambia, Indonesia, Iraq, Kosovo, Lesotho, Moldova, Niger, Russia, Serbia and Vietnam. Some will close immediately, others will close over the next five years as the countries graduate from UK aid.

Click here for a full breakdown of DFID’s country allocations.

6. Take a principled and hard-nosed approach to multilateral funding 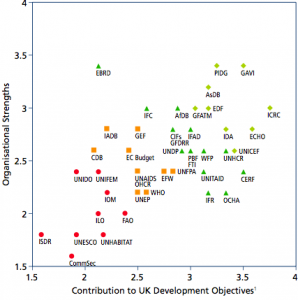 The UK is also focusing its multilateral aid on agencies where it can have the biggest impact.

DFID’s Multilateral Aid Review assessed the organizational strengths of 43 organizations and their contribution to UK development and humanitarian objectives.The results are summarized in the chart opposite–the the best rated agencies (e.g. GAVI) are in the upper right, the poor performers (e.g. CommSec) in the bottom left.

The key recommendation from the review is to reward multilateral agencies that perform well with more UK aid. Poorer performing agencies–including UN Habitat, the International Labour Organisation (ILO) and the Food and Agriculture Organisation (FAO)–will have funding cut or be put on a watch list, with future funding contingent on improvements in performance. In doing so, the UK is sending a powerful signal to these agencies and creating greater competition for funding.

It will be interesting to see if other bilateral donors follow the UK’s lead in putting pressure on poor performing multilateral aid agencies to raise their game.

Laurence Haddad, the Director of the Institute for Development Studies, summarized the review like this:

I think the winners of this process are those organisations who have shown they have a proven capacity to deliver real results, and the losers are those who have not recognised they have to be better at marshalling their evidence that the money will create more change. I think we have every reason to be optimistic that this review will see UK aid have a very positive global impact.

Once again the UK has shown that it can generate great ideas on how to improve aid effectiveness–strong political leadership, a clear set of outcome-based objectives, a strong emphasis on results, and a more focused bilateral and multilateral aid programs.

In doing so DFID has set the benchmark for other donors. How will other aid agencies respond?

Matthew Morris is a Research Fellow at the Crawford School and Deputy Director of the Development Policy Centre.